How Many Days in Nepal are Enough for Your first Nepal Tour?

As one of the most popular places in the Himalayas to visit for international tourists, Nepal has a wide range of attractions for the discerning traveler. While the Himalayas lie on its northern border, stretching the entire length of the country, there is more to Nepal than trekking.  If trekking is your thing, then there is no better place to go, with amazing treks through mountains, valleys and dense primeval forests barely touched by man, as well as the most popular treks to Mount Everest Base Camp and the Annapurna Range.

If it is your first time in Nepal, then there are plenty of treks that can give you an experience of the sheer magnitude of trekking in the Himalayas at high and extreme altitudes. There are also plenty of things to do aside from trekking, especially in the Kathmandu Valley, the heart of Nepal and the center of Nepali culture.

How many days are enough for a Nepal Tour? What to do if I have more than one week to stay in Nepal? Here is the detailed information about how to plan your first Nepal tour according to different travel length.

Top Attractions for First-Time Visitors to See in Nepal

While it is a relatively compact country, the rough terrain and diverse geography of the country means it takes a long time to get anywhere within Nepal. However, majority of the most popular highlights of Nepal are actually in the Kathmandu valley or close by, which means less time spent traveling and more time spent sightseeing and trekking.

With Kathmandu being home to the country’s only international airport, it is best to stick to the area around the Kathmandu valley for your first trip to Nepal, especially if you are on a restricted schedule, as going anywhere else can take several days. However, even in Kathmandu, where nothing is very far apart, it can take a while to get anywhere due to traffic so try not to pack too much into one day.

The Kathmandu valley is so full of rich cultural, architectural, religious, and historical treasures that there is little need to go anywhere else to get the best experience of traditional Nepali culture. The Kathmandu and Patan Royal Durbar Squares are easy to get to, and with the palaces and stupas that surround the squares, you can see more of how royal life in Nepal was in the past.

If you love temples, whether Buddhist or Hindu, then you will love Kathmandu. Swayambhunath Stupa is one of the most spectacular in the world, built on top of a hill in the valley to the west of the city. Legend says that the temple sprung from the ground when the area was drained, and it is one of the most important sites for Buddhists in Nepal, second only to Bouddhanath. 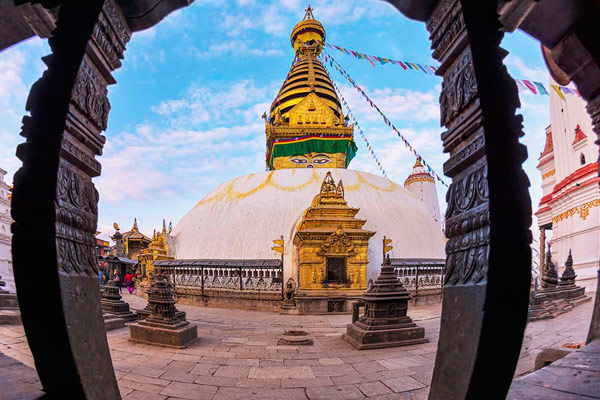 Swayambhu is an ancient religious architecture at the Kathmandu Valley

Bouddhanath Stupa lies towards the northeastern outskirts of Kathmandu, and is the most important Buddhist Stupa in Nepal. The huge mandala of the stupa’s architecture makes it one of the largest stupas of its kind in the world, and it dominates the skyline, framed by the background of the Himalayas in the distance. With a large population of Tibetan Buddhists living in the Kathmandu Valley, gompas have sprung up around the stupa over the years, and the ancient trade route from Tibet to Kathmandu passed close by the stupa, where merchants would rest and pray.

A famous and sacred temple complex on the banks of the Bagmati River, the Hindu Pashupatinath Temple is the main temple of Lord Pashupatinath, the national Hindu deity of Nepal. A sprawling collection of temples dedicated to the various Hindu gods, the complex has been constantly expanded along the riverbank over the centuries. As well as being the site of some of the major Hindu cremation rituals in Nepal, where the bodies are burned on raised platforms above the river, it also holds the Maha Shivaratri Festival, which is attended by more than a million devotees every year.

Join in our classic 15-day Beijing Lhasa Kathmandu Overland Tour to see all the top attractions in Nepal.

Generally, all the essentials of the Kathmandu valley can be visited within 48 hours. If you are looking at trekking along some of the famous trails in Nepal, then there are plenty of options for you to try. Depending on how long you have to spend in Nepal normally decides which of the treks you can undertake, and even those with just a few days to a week can get in some trekking in some of the most stunning landscapes on the planet.

The trek starts from Kathmandu, with a drive to the trailhead at Sunjdarijal, where you start the trek to Chisapani, around four and a half hours away. Several local settlements are seen as you travel along the trail, and the stretch down to Chisapani runs from the ridge through a forest of rhododendron trees.

From Chisapani, the route then takes you to the village of Nagarkot, along one of the country’s most charming trails. Nagarkot is one of the most popular locations in the valley, as it has great views of the distant Himalayas. The next stage of the trek runs to Changunarayan, and takes around four hours of trekking. Changunarayan is one of the most culturally diverse parts of the valley, with the original Newar inhabitants of Nepal being the most prolific people of the area. One of Nepal’s many UNESCO World Heritage Sites, it has many interesting cultural practices, and is a place of serene beauty and charm. Your last night is spent in Changunarayan, with its brick-built houses and sloped-roof pagodas, with statues of sacred animals and deities all over the town.

For those with more time to spend in Nepal, a ten-day trekking tour can get you to one of the best sites in the country from which to view the massive peak of Mount Everest, the world’s highest mountain. A trek to the Everest Base Camp (EBC) takes around 12 days, but with a ten-day tour, you can trek along part of the route to EBC, and get one of the greatest views in the world.

Tourists are on the way to the Everest Base Camp by treking.

The first full day can be spent touring around the sights of the exotic capital of Nepal, Kathmandu, before heading off into the wilds with a flight to Lukla, the start of the famous EBC trek. After landing, you will soon head off on the first leg of the trek, to the small village of Phakding, passing through rhododendron forests and across wood and rope bridges that span the Dudh Kosi River Gorge.

From Phakding, the route heads next to Namche bazaar, the Sherpa Capital of the Himalayas. The route to Namche takes you through the entrance to the Sagarmatha National Park, and the final leg of the trek to Namche is a steep uphill climb that is rough and tiring.

From Namche, you ascend even further, to the village of Khumjung, and then on to the village of Tengboche, the turnaround point of the trek. The route travels through valleys that are close enough to the mighty mountain to see the peaks of Lhotse and Nuptse towering above you, and the Sherpa villages you pass through have barely changed over the centuries. These traditional villages are a vast difference to the more westernized places lower down, and are an awesome experience.

The downward route heads through Monjo, taking a different trail back to Lukla through juniper and rhododendron forests to the village, where you will stop overnight before heading back down to Lukla and the flight back to Kathmandu.

If you want to have a panoramic view of Nepal for your first time to Nepal, you need to spend at least 10 days. One of the classic trips to visit all essentials of Nepal takes 12 days, during which you can take a short three-day trek in the Pokhara region, and to the famous Chitwan National Park for a short safari tour. After touring the in the Kathmandu Valley, as far as Nagarkot, the tour takes you out to the Chitwan National Park, the largest of the national parks in Nepal. En-route to the park, you will stop off and get to try your hand at one of the adventure sports that Nepal is famous for. The Trishuli River, which runs down from the Himalayas at the border crossing with Tibet, is one of the best sites in Nepal for white-water rafting, and you get to spend 2-3 hours rafting on the river before heading on to stay overnight at Chitwan.

The safari in Chitwan is a full day activity, which takes you out into the park, through dense jungles and across lush green meadows threaded with rivers. Chitwan is famous for its wild animals, which includes the Bengal tiger, the one-horned rhino, Indian elephants, leopards, monkeys, and much more. It is advisable to have spare camera batteries with you, as you will not want to miss some of the stunning shots that can be taken here.

After Chitwan, it is off to Pokhara, where you can spend the afternoon on or by the Phewa Lake, before heading out on the trek. A three-day trek, you head through Kande to the Australian Camp of the central Himalayas, from where you can get some of the most stunning views of the mountains. After the trek, you get to stop and go sightseeing in Pokhara for the day, before returning to Kathmandu.

Some Advice for First-time Visitors to Nepal

If it is your first visit to Nepal, and you are planning to go trekking, then you need to be aware of the general rules of the mountains. Altitude is a huge problem if you are not acclimatized properly, so it is essential to make sure that you take the time to allow your body to adjust to higher altitudes as you ascend on the treks.

A Trekkers Information Management System card (TIMS card) is required for all trekkers in Nepal, in order to make sure that someone knows where you are going on the remote trekking trails in the Himalayas. The card is relatively inexpensive at 10-20 dollars.

0 Comment ON "How Many Days in Nepal are Enough for Your first Nepal Tour?"