China Nepal Railway: The Railway from China to Kathmandu via Lhasa

Plans are now underway for a railway link to Kathmandu from Lhasa, to make travel time shorter, and safer, and to continue the friendly link between Tibet/China and Nepal. A rail link across the high Himalaya Mountains would improve not only tourism to both countries, but economic and social relations, opening up a better trade route between Nepal and China. And the extension to the far west of Tibet would also facilitate better transportation of goods to the people in that region, improving their way of life.

On July 6, 2006, China officially opened the first ever railway link to Tibet, known as the Qinghai-Tibet Railway, or Qingzang Railway. Running from Xining in Qinghai Province to Lhasa, the capital of Tibet, this 1,956-kilometer track finally linked Lhasa and Tibet to the massive rail network in mainland China. 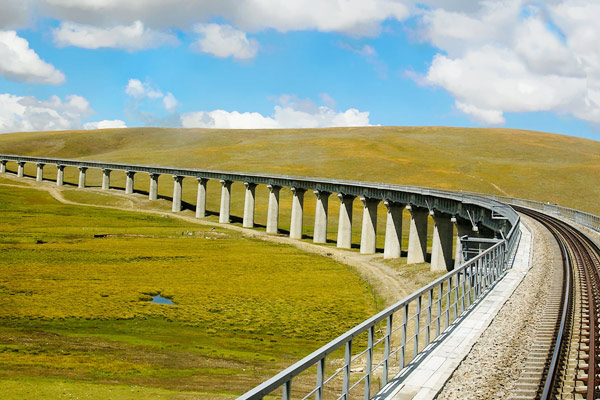 Since that day, thousands of visitors to Tibet have traveled on the railway, and it remains the most popular form to start a Tibet tour. While flying may be the fastest way to get to Tibet, there is nothing to beat the comfort, service, and the spectacular views you get from traveling on the Tibet train.

However, the rail service to Lhasa does not just start in Xining, in Qinghai Province. Through Xining, it is connected to the entire rail network in China, and travelers to Tibet can get trains direct to Lhasa from seven major gateway cities, namely Beijing, Chengdu, Chongqing, Guangzhou, Lanzhou, Shanghai, and Xi’an. The trip to Lhasa from these cities across China takes between 22 and 53 hours, and from the furthest city, Guangzhou, the train travels a total distance of 4,980 kilometers.

The Qinghai-Tibet Railway is the highest railway in the world, with more than 960 kilometers of the track sitting at altitudes above 4,000 meters. At its highest point, Tanggula Pass, the track reaches an elevation of 5,072 meters, making Tanggula Station (5,068 m) the highest station in the world. And these are not the only record-breaking feats of this “sky train” across the plateau.

Completed on August 16, 2014, this 253-kilometer extension of the Qinghai-Tibet Railway line connected Lhasa, Tibet’s capital, with the second largest city in the region, Shigatse. The Lhasa-Shigatse Train plays an important role in Tibet’s traffic by providing more convenient travel for Lhasa to Shigatse round-trip travelers. There are two daily commuter trains that run between Lhasa and Shigatse, which take around three hours. The number of trains may be increased to satisfy the needs of more passengers during the tourism season. Trains Z8801 and Z8803 run from Lhasa to Shigatse, while trains Z8802 and Z8804 run in the opposite direction. 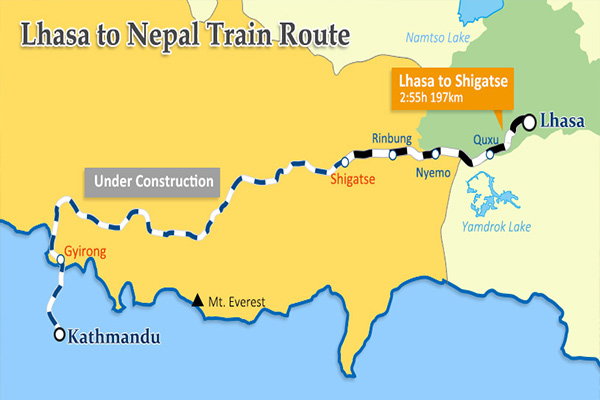 There are six stations on the route from Lhasa to Shigatse, including the start and end stations. The trains also stop for a few minutes at Sherong, Chushul, Nyemo, and Rinbung. With only a 2 hour 53 minute traveling time between Lhasa and Shigatse, taking the train is a much more convenient option for those traveling between the two cities.

This extension as far as Shigatse has opened up faster services to the west of the region, and increased the amount of goods that can be transported there, bringing more food, technology, and visitors to this remote area of Tibet. 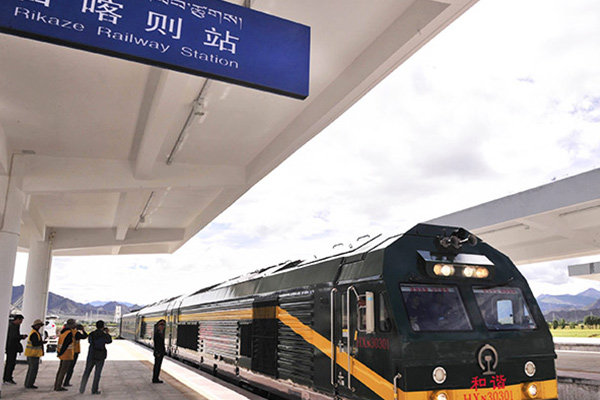 The train from Lhasa has arrived at the Shigatse Railway Station

As Tibet’s second largest city, Shigatse is one of the main centers for tourism in Tibet, along with Lhasa and Mount Everest, and is the home of the world-famous Tashilhunpo Monastery, the traditional seat of Tibet’s second highest incarnation, the Panchen Lama. Moreover, Shigatse is the closest major city in Tibet to Mt. Everest, known locally as Mt. Quomolangma, making it more convenient for people to visit Everest Base Camp, one of the most popular tourist spots in the world.

Not only does this line mean an increase in goods transportation to the western areas of Tibet, but it also means that travel in Tibet is easier, cutting down the pollution caused by hundreds of cars and truck traveling along the Friendship Highway. In addition, it will also cut down on the cost of tours in the region for foreign tourists. For those wishing to tour only the western areas, including Mt. Everest and holy Mt. Kailash, they will be able to get the train direct from China to Shigatse, via Lhasa, and their guides can meet them at Shigatse station for the start of their tours. This extension can cut the cost of the tours to Mt. Kailash and Mt. Everest drastically, and possible increase the number of visitors to the area.

Shigatse to Gyirong Section – Still in the Planning Stage

As the first international railway linking China and Nepal, the proposed China-Nepal Railway has attracted a great deal of attention since it was first announced. The proposed next stage of the railway will run for 540 kilometers from Shigatse to Gyirong port, in Gyirong County, on the border between Nepal and Tibet. Currently, Gyirong Port is the only crossing point between Tibet and Nepal, and caters to overland crossings between Gyirong Port and Rasuwagadhi, in Nepal. At the moment, the next extension is still in the planning stage; however, recent news has stated that the planned rail link should be completed by 2020. 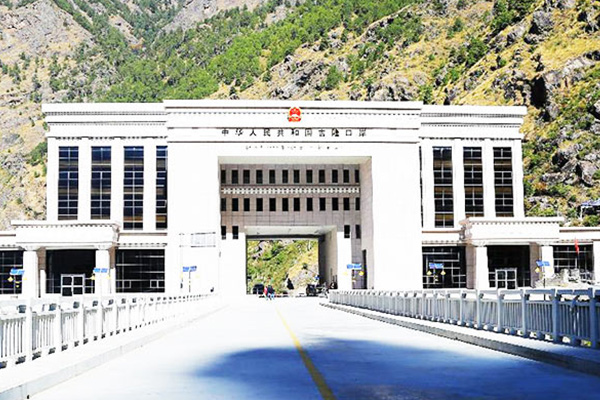 Gyirong port, the only crossing point between Tibet and Nepal

The construction of the project was proposed back in 2006, after the opening of the Qinghai-Tibet Railway, and the first section was completed in 2014, to Shigatse. In March of 2016, China and Nepal signed ten political accords in areas ranging from tourism to trade, which also included agreements on the international railway project.

Later on that year, the National Railway Administration and China Railway Corporation organized research groups to Tibet to do spot surveys along the proposed route, and the China Railway No. 1 Bureau identified the rough route of the Shigatse to Gyirong section of the line. The construction was approved by the China Ministry of Transport, and in May 2017, it was reported in the Investigation Report of Feasibility of China Nepal Railway that there was now urgency in the construction.

Known as the “Belt and Road Initiative”, the proposed railway from Gyirong to Kathmandu has been planned in response to requests from the Nepalese government, and is an act of confirmed friendship between the two nations. The railway is a part of China’s “One Belt and One Road” strategy, which is designed to provide better transportation along the Silk Road Economic Belt and the Maritime Silk Road, and improve political and economic relations with Nepal, and potentially the entire Indian sub-continent. 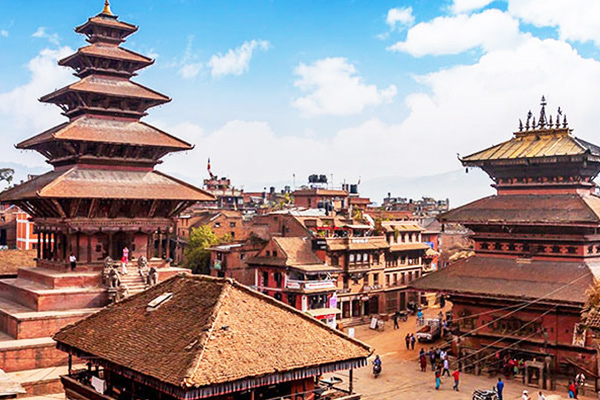 Kathmandu, the capital of Nepal

The proposed route from Gyirong to Kathmandu is planned to cross the border at Gyirong Pass, and then follow a more direct, 120-kilometer route from there to Kathmandu, instead of following the long and winding road that currently runs from Kathmandu to the border. Construction of the last section to Kathmandu is expected to start as the Shigatse-Gyirong section is completed in 2020, and authorities have estimated its completion ready for use by 2022.

Once this railway link to Nepal has been completed, it will enhance trade and tourism between China and Nepal, as well as improving domestic relations with the people of western Tibet. In Nepal, the authorities also have a plan to continue the rail network with extensions of the line to Pokhara and Chitwan, two of Nepal’s top tourist destinations and the other two major cities in the region.

Since the railway is still under construction, you can take an overland tour from Tibet to Nepal or Nepal to Tibet, China.

With the proposed construction estimated to be completed in 2022, there is still a long time to go before rail travel from Kathmandu to Lhasa becomes a reality. However, since the border between Nepal and Tibet is now open again, visitors can take a Nepal Tibet tour by road, and enjoy the views of the mountain and lakes as they cross the plateau landscape along the Friendship Highway. Overland tours start in either Lhasa or Kathmandu, and can run both ways, with the visit to Mt. Everest being at either the start or near the end of your tour. While it does take a lot longer than the proposed railway line to Kathmandu, it is still an awe-inspiring and breathtaking experience to travel across the roof of the world.

0 Comment ON "China Nepal Railway: The Railway from China to Kathmandu via Lhasa"