Tibet is a country of Buddhist belief, and the plateau is the source of Tibetan Buddhism. The region has hundreds of monasteries, and towns such as Lhasa, Shigatse, Gyantse, Tsedang, and Sakya are major tourist destinations. In Lhasa you will find the World Cultural Heritage sites of Potala Palace and Jokhang Temple, and around the region are famous monasteries like the Tashi Lhunpo Monastery - the seat of the Panchen Lama, and the first ever Tibetan monastery, Samye Monastery, in the Yarlung Tsampo River valley.

After touring around the central area of Tibet, you will be taken to visit the world's tallest mountain, Mt. Everest, in the grand Himalayan Mountain Range, and see the four major peaks that are over 8,000 meters above sea level. The final leg of the journey takes you through the alpine valleys to the border with Nepal, and on across the border to the legendary, Kathmandu. The ten-day tour is the perfect way to explore the depths of Tibetan culture and Buddhism, as well as the amazing scenery, and spectacular mountains and lakes.

When you arrive in Lhasa by train or flight, our guide will greet you warmly with the phrase, "Tashi Delek", which means 'wish you all the best'. A private car will transport you to your hotel to allow you to rest and acclimatize for the rest of the day. On the road to the hotel you will get to see the longest and largest river in Tibet, the Yarlung Tsampo River, as well as the Lhasa River.

Tips: If this is your first visit to Tibet, you will need to acclimatize to the increased elevation, to prevent altitude sickness. This is best done by resting in the hotel, and minimiz-ing any physical exertion.

The following day your first stop will be the world famous Potala Palace, the winter pa-lace of the Dalai Lama. Sitting atop Moburi (Red Hill), the palace looks down on the town of Lhasa from its 3,750-meter vantage point. The temple dates back to the 7th century, and houses artifacts and works of art from throughout Tibetan History. The palace also has the gilded burial stupas of the past Dalai Lamas, and below ground lies the ancient meditation cave of the 33rd King of Tibet.

After some lunch, you will head downtown to Jokhang Temple, the primary seat of the Gelugpa sect of Tibetan Buddhism. It was built by the 33rd King of Tibet in 647AD, and is the spiritual center of Tibet and the holiest temple in Tibetan Buddhism. Inside sits the most precious object in the temple, a life-sized statue of Buddha Sakyamuni when he was just 12 years old. Adorned with many precious gems, this gilded statue is the most sacred object in Tibet.

Running around the temple is the famed Barkhor Street. As well as the route of the holy kora, or religious circumambulation, it is also the site of many sellers where you can buy authentic souvenirs from across the region. You can join the pilgrims on their clockwise walk around the temple.

If time permits, you can request your guide to take you to visit local Tibetan handicraft art, and you can upgrade your trip with a Tibetan Culture Show in the evening.

The next morning you will leave early for a trip outside Lhasa, first to Drepung Monastery, one of the Great Three monasteries of the Gelugpa sect. Sitting at the foot of Gambo Utse, 5 kilometers outside Lhasa, it was founded by Jamyang Choge, one of the disciples of Tsong Khapa, in 1416. The Ganden Potrang, sited in the southwest corner of the monastery, was the former residence of the Dalai Lama, until the move to the Potala Palace. The monastery is also home to the biggest monastery kitchen in Tibet, and if time permits, you can go and visit the Buddhist Sculpture Carving workshop nearby.

In the afternoon you will travel back across the city to the northern suburbs, to visit Sera Monastery, another of the Great Three monasteries. Founded in 1419, the name, Sera, means "wild rose" in Tibetan, and was named because of the roses that were in bloom on the hill behind it when it was built. The main attraction of the monastery is the colorful and animated debating of the monks, held under the trees in the debating field every afternoon. Definitely something to watch, even if you do not understand what is said.

The day starts with a drive along the Yarlung Tsampo River Valley to Samye Monastery, passing the Sand Mountain and high mountain meadows along the way. The famous Samye Monastery, the first Buddhist monastery in Tibet, was built in the 7th century. The main temple is a mix of Tibetan, Han, and Indian, and is the first complete monastery with the three Buddhist jewels of Buddha, Dharma, and Sangha. After Samye, you will drive on to Tsedang, the capital of Shannan Prefecture.

Situated in the beautiful, fertile Yarlung valley, Tsedang is known as the cradle of Tibetan civilization. Yambulakhang Palace, in Tsedang, is the first ever palace, which was built for the first Tibetan King, Nyatri Tsedpo, who is said to have come down from heaven. Nearby lies the Tradruk Temple, the oldest geomantic temple in Tibet, dating back to the 7th century, and pre-dating the Jokhang temple, in Lhasa.

In the morning you will leave Tsedang for Gyantse, and will have the chance to see some of the beautiful scenery of the region. The route passes over Gampala Pass, at 4,790 meters, and you will get a brief glimpse of Lake Yamdrok-tso. Surrounded by many high mountains, the lake shimmers a deep turquoise in the sunlight, and beyond it you will see the holy mountain, Nyenchen Khangsar, which at 7,191 meters is the highest mountain close to Lhasa. Passing the lake, you will get a wonderful view of the Karo Glacier, before heading on to Gyantse, Tibet's third largest city.

The following day, you will drive from Gyantse to Shigatse, the second largest city in Tibet. In Shigatse, you will be able to visit the Tashi Lhunpo Monastery, with its ancient statue of Jampa, the “future god”. Tashi Lhunpo is also the seat of the Panchen Lama, the second highest spiritual leader in Tibetan Buddhism.

After the monastery, you will drive out into the countryside of Sakya County, where you will visit the famous Sakya Monastery. The main monastery of the Sakya sect of Tibetan Buddhism, the Sakya sect is unique in that it does not believe in the reincarnation of the lamas, and the head of the sect wears white robes, and is allowed to marry and have children. Consisting of two separate parts, the northern monastery is now only a ruin, while the southern monastery - which was built like a fortress, complete with moat - is still in constant use.

The run from Sakya to Rongbuk passes over Gyatso-la Pass, the highest mountain pass in the world at an elevation of 5,200 meters. The road then continues on to Tingri, the main entry point to the Himalayan Nature Reserve.

It is just a few hours drive to Rongbuk, and the road that winds its way through the mountains is new and smooth running. On the road you will pass by wild grasslands, lofty mountains, and deep river gorges, and will get to see the Himalayan panorama, if the weather is clear enough. There are four mountains in the range that are over 8,000 meters high - Mt Lhotse (8516m), Mt. Everest (8848m), Mt. Cho Oyu (8201m), and Mt Makalu (8463m).

Stay overnight in a tent or at the Rongbuk Monastery Guest House (depending on availability).

Tips: The location is very remote and inhospitable, and the accommodation facilities are very basic here. Water is in short supply, there is no hot water, and toilets are just a pit in the ground. You should also be aware that in this remote region, you will be "roughing it", and sleeping facilities are not ideal. However, it is more than worth it to put up with the basic facilities for the amazingly spectacular views of Everest, and we will do our best to ensure that your personal requirements can be met, and you get the very best service from us.

As the dawn comes, you will be able to greet the sun as it rises over the mountains, framing Everest in its morning glow in the distance. The view of Everest from Rongbuk is magnificent, with the mountain standing proud in front of you. Then you can move on to Everest Base Camp.

After visiting EBC, and taking all the photographs you can manage, you will head back to Rongbuk for a tour of this amazing monastery. The highest monastery in the world, at 5,000 meters above sea level, it is part of the Nyingmapa Sect of Tibetan Buddhism, and is unique in that both monks and nuns live together in the same monastery.

When you leave the monastery, you will drive to Gyirong port, taking in the breathtaking vista of Mt. Shishapangma and Pekutso Lake. The road goes past the Ghungtang Lhamo, at 5,236 meters, and you will arrive in Gyirong in the late afternoon.

In the morning, your guide will assist you to exit China, and will see you off at the border with Nepal. Transfers from Gyirong to Kathmandu can be arranged, but are not included in the package, and will require an extra payment if requested. 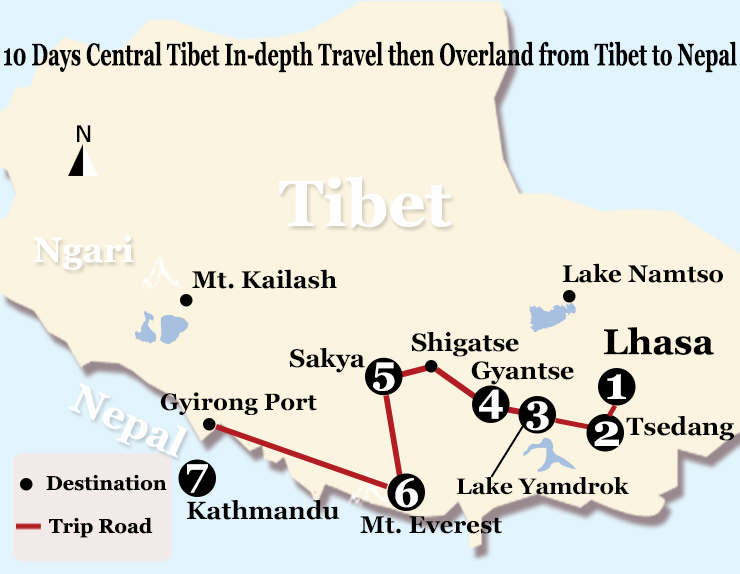 From Price upon Request