When is the Best Time to Visit Nepal Himalayas

The Himalayas is known to be the home of the world’s long stretch of mountain ranges and highest peaks. The stretch of this mountain range starts from Pakistan that goes all the way to India, Bhutan and Nepal. To the east, the mountain range also reaches China. The mountain range offers a majestic view which is not only admired by the locals but is also very popular among tourists and climbers.

Nepal Himalayas is a part of the Himalayan mountain ranges which occupies most of Nepal and extends to Tibet in China and Sikkim in India. The Nepal Himalayas features many of the World’s highest peaks that is covered in snow and overlook huge glaciers that can be enjoyed by climbers.

Where is Himalayas in Nepal

The Himalayas is a form of mountain range located in Asia. Nepal has the longest range of the Himalayas which is about 800 Kilometers and starts from the Mahakali River and ends at the Tista River. The Nepal Himalayas is specifically located in the east-central section and is the highest peak in the Himalayan mountain range and is a popular spot for adventure seekers. It is composed of 250 peaks which are 6000m high, including the world highest mountain - Mt Everest. Furthermore, the addition of amazing trekking routes in Nepal attracts hundreds of thousands of tourists from all over the world.

Among the 4 seasons in Nepal, spring and autumn are the best seasons to visit Nepal Himalayas. But, each season has its own pros and cons regarding what part of the Himalayan regions will be visited.

Spring (Mid-March until May)

This season brings warmer weather but intermittent storms and noticeable snowfall at higher altitude. Towards the end of March, haze caused by the dust from the plains of India and smoke coming from local fires usually cover up distant views. Additionally, it becomes warmer in the region below 3000 ft. This period is the second most popular time to go trekking in Himalayas region of Nepal, as temperatures and weather tends to be more stable, which is optimal for classic treks in Nepal’s Himalaya regions. 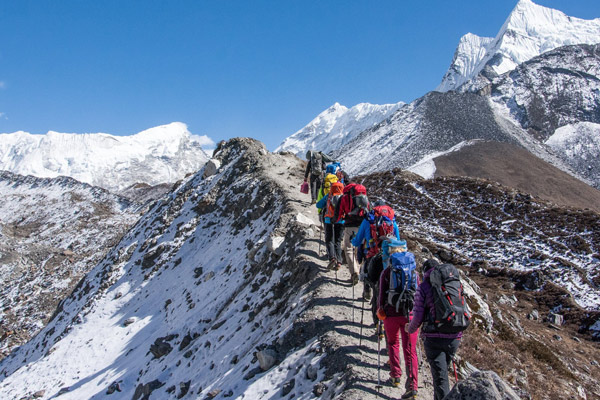 Spring is the optimal season for classic treks in Nepal’s Himalaya regions.

The drawback of spring is that sometimes the mountain views can be obstructed when the skies get hazy. Furthermore, trekking at this season tends to be busy, which means encountering travelers from different countries is quite often, which can be a downside for people preferring to have nature for themselves. This season is a perfect time to cross high passes like Larkya La, Kongma La, Thorung La and trek high viewpoints of Nepal such as Kala Pattar and Gokyo Ri in Everest Region.

In this season, the nights in the mountains are cold, but during daytime the bright sun produces pleasant temperatures. At higher elevations, temperature ranges at 20°C down to possibly -10°C at night. Morning is mostly clear, and clouds build up in the afternoon, disappearing at night to reveal fantastic starry skies. It’s the season that is most popular for trekking because the weather is generally stable and temperatures are steady, and skies are more likely to be clear.

It’s an amazing time to visit the Himalayas region of Nepal at this season because of the vibrant color by the nature as everything is washed and vegetation grown strongly. Since the weather conditions and mountain views are at their best, expect large crowds as well! Treks recommended in the spring can also be applied during this season.

Mostly, guidebooks will say that the best time to visit Himalaya regions in Nepal are spring and autumn, because the weather are more likely to be moderate and stable, with the addition of clear skies. Although, the conventional knowledge that spring and fall are great for trekking is somehow true, winter and summer have some distinct advantages as well which Increases tourists from around the world visit Nepal Himalayas in every season.

In winter, the cold weather at the higher elevations occurs heavy snowfalls especially during the January, February and March in Himalayan regions. Winter rains are much noticeable in the western hills of the Himalayas. Winter is still a great time to visit Himalaya regions in Nepal because even in December and January, when winter is severe, bright sun shows from time to time which reveals astounding crystal clear skies. 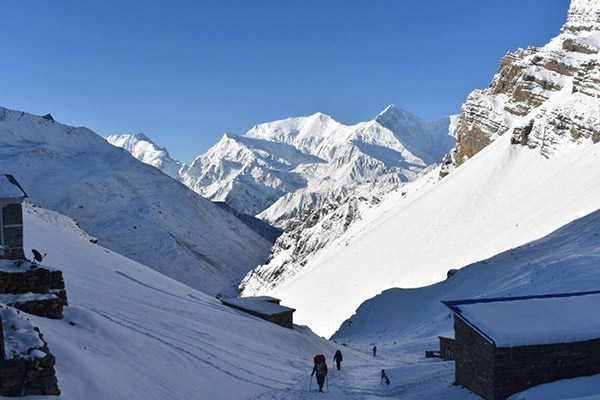 It is perfect to trek in the lower Himalayan foothills and middle hills in winter.

Trekking in high mountain areas and trails which includes high pass crossings are too cold in the winter and can be risky. It is perfect to trek in the lower Himalayan foothills and middle hills during the winter season. It is cold at night. However, temperatures during the day are quite comfortable. These past few years, climbing Chulu, Mera peak, Island peak and also trekking in Everest, Annapurna and Langtang have been quite popular.

>> Check the Ultimate Guide to Climbing Everest in Winter

This period is the monsoon season which means Rain, mist and fog can be expected every day of the season, but clouds dissipate occasionally and reveals spectacular views of the mountains. The floras are most likely to be at their most colorful. Mountain weather is tremendously unpredictable. Typical signs of an impending storm such as cirrus clouded sky or a fall in barometric pressure, can be deceiving. This season trekking becomes difficult and is advisable to be undertaken only by the experienced trekkers because trails are muddy and often leech-infested. Also the mountains are usually shrouded by the clouds. Trekking in the “rain shadow” of the Himalaya is great at this time of the year, like Upper Mustang or Nar Phu.

Visiting the Himalayas in Nepal requires planning which is the most important part of the trip. Nepal normally experiences four seasons, as the low season being less crowded due to the monsoon season. On the other hand, autumn season which is High season gets crowded and accommodations get booked out in advance as tourists from various countries trekking up to Everest and Annapurna.

Because of the increasing tourism within the area, there are various hotels, guesthouses, homestays, and teahouses where trekkers can stay during the visit in Nepal Himalayas. As mentioned, it is best to book your accommodations in advance during peak season, as some of them tend to be filled up.

Trekking in the Himalaya always pose a real danger related to altitude scaling from mild to serious problems. These are known as Acute Mountain Sickness (AMS) or Altitude Sickness. Trekkers should understand that ascending altitudes over 3000 meters will affect them from lesser to greater extent. As humans climb higher, atmospheric pressure falls and the amount of available oxygen also falls leading to AMS. Symptoms of AMS may be mild or severe and severe symptoms can develop symptoms very rapidly if the mild effects are ignored.

Packing for Nepal Himalayas greatly depends on when are you going and also what type of tours and treks you will be doing. Wandering around the streets of Kathmandu can help trekkers find all the trekking gears they need for a fraction of the price. However, good quality items can be bought in online shops.