Is a Visa Required for Entering Nepal from India?

Lying side-by-side, Nepal and India are neighbors with a unique international relationship. Nepal has been hugely influenced by the Indian sub-cultures in many ways, including the Hindu religion that originated in India thousands of years ago. The main religion in Nepal, it is now a little different as it also includes many aspects of Tibetan Buddhism in its rituals and beliefs.

Traveling from India to Nepal is a relatively easy affair, as there are numerous border crossings and flights from all across India’s many states to the Tribhuvan International Airport in Kathmandu. And with such a wealth of options for travel to Nepal from India, it is a popular route to take for foreign tourists traveling through Asia.

Nepal is also a popular tourist destination for Indian nationals, with many popular Buddhist and Hindu sites across the Himalayan state that are regularly visited by Indian Hindus. Temples such as Swayambhunath and Pashupatinath. The exotic city of Kathmandu is also a popular place for Indian tourists to visit and sees a huge number of Indian travelers heading for the city every year.

India has a unique political relationship with Nepal as well, which means that a passport and visa is not actually required for travel to Nepal. Citizens of India with a valid government-issued ID card do NOT need a visa for travel to Nepal. The 1950 Indo-Nepal Treaty of Peace and Friendship allows a freedom of movement for all Indian citizens to Nepal, and vice versa.

With this reciprocal agreement between the two countries in place, there is a huge amount of travel across the international border between India and Nepal for Indian tourists traveling to the Himalayan kingdom.

See our best Himalaya tours from India to Nepal and Tibet here.

For those international travelers that are already in India and wish to travel to Nepal, there are certain requirements for documents, depending on their country of origin. All nationals of other countries except India, require a visa in order to enter Nepal from India. However, there are certain rules that apply to travelers from different countries, depending on where they are originally from. 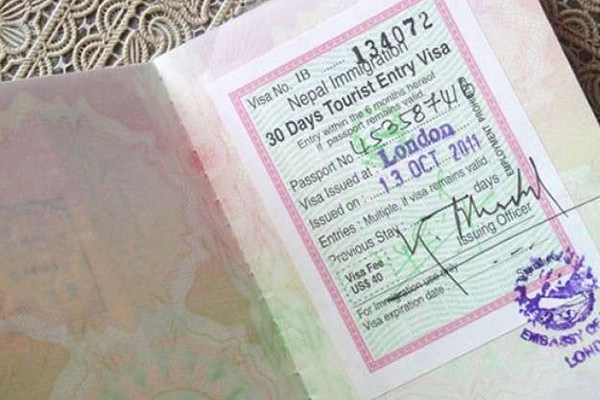 Citizens of Pakistan, while needing to have a passport and visa, can obtain their visa free of charge, and Chinese tourists traveling to Nepal have a free visa available, as long as their visit is for tourism only. For everyone else, there is a payment required for the visa to enter Nepal, which is normally around 30 US dollars.

There is a Visa On Arrival service available to the citizens of most nations, with the exception of citizens of Afghanistan, Cameroon, Ethiopia, Ghana, Iraq, Liberia, Nigeria, Palestine, Somalia, Swaziland, Syria, and Zimbabwe, who require a visa in advance of their travel.

The requirements for the Visa On arrival service in Nepal are a valid passport with at least six month’s validity remaining at the time of travel and with two blank visa pages, two passport-sized photographs on a white background, a completed application form, and the visa fee.

For obtaining a visa from an Embassy, the Nepali Embassy can be found in New Delhi with a consular office available in Kolkata. Applications for Nepal visa at the embassy or consular office must be included with a proof of citizenship of your country of origin and your visa or entry stamp for entry and residence in India.

How to Get to Nepal from India?

Traveling to Nepal from India can be done in two ways, by flights to Nepal’s Tribhuvan International Airport in Kathmandu, or by overland journey by car or train across one of the six land border checkpoints between India and Nepal.

There are currently six open border crossings between India and Nepal, at Kakarbhitta, Birgunj, Belhia, Jamunaha, Mohana, and Gadda Chauki. 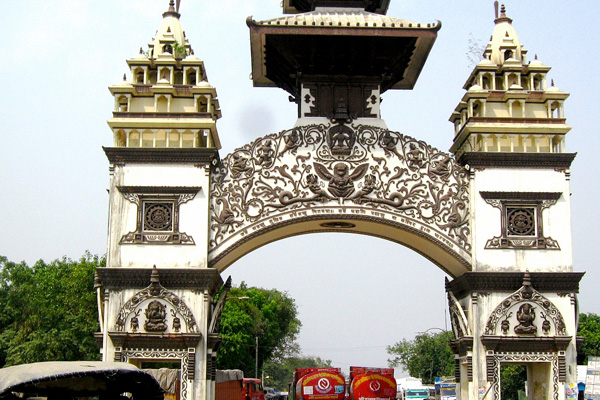 Kakarbhitta, which lies at the eastern end of Nepal, is one of the main border crossing points from West Bengal and Sikkim to Nepal. This small town on the Indo-Nepal border can be used by both locals and foreign travelers and is a major option for those from the northeast of India for traveling into Nepal. Hotels in the area are moderate in price for tourists to Nepal, and the transport system has regular buses running to Kathmandu several times a day. The trip to the Nepali capital takes around 15 hours. There is also the option of flying from Bhadrapur, around 25km southwest of Kakarbhitta, which takes around 3 hours 30 minutes to Kathmandu.

Birgunj is the main entry point for Nepal from India and is the most-used border crossing between the two countries. It is also the main entry point for Indian nationals from west and central India to Nepal and is around 210 kilometers from Kathmandu. On the Indian side of the border is the railway station of Raxaul, which has rail connections to majority of the stations across India and is widely used by tourists both Indian and international when traveling to Nepal. There is also an airport at Simara, around 20km from Birgunj, which has regular flights to Kathmandu that take around 20 minutes.

Also known as Siddharthanagar, Belhia in Bhairahawa is around 280 kilometers from Kathmandu and is an important crossing point for trade and commerce between India and Nepal. Close to the Indian border, the town of Belhia is also the gateway to Lumbini, the birthplace of Buddha and is a popular place to shop for imported Chinese goods. The airport at Bhairahawa has regular flights to Kathmandu which take around 30 minutes and there are local buses that take 6 hours to make the trip to the Nepali capital.

Jamunaha is the border town in Nepalgunj that is the crossing point for many Indian and international tourists. Around 530 kilometers from the capital of Nepal, it takes around 12 to 13 hours to drive, and buses can take as long as 15-18 hours to make the trip. Well connected to the major Indian cities by both road and railway, Nepalgunj is one of the major trading centers of Nepal. Regular flights run to Kathmandu daily, taking around 3 hours.

Gadda Chauki in Mahendranagar is a small town that lies I the far west of Nepal around 695 kilometers from Kathmandu. There are no regular flights from anywhere nearby, and it is a 16 to 18-hour drive to the capital of Kathmandu. However, it is a great place to be for the Royal Bardia National Park which is just a short distance away.

Flights to Nepal from India are a popular way to travel to the Himalayan kingdom and can be found relatively cheaply on the internet. There are direct flights to Kathmandu’s Tribhuvan International Airport from New Delhi, Bangalore, Kolkata, and Mumbai, and indirect flights from more than a dozen other airports across the country. Flights start from around 10,000 Indian rupees, or around US$ 150 for an economy one-way flight, although this does depend on discounts available at your departure airport at the time of travel. 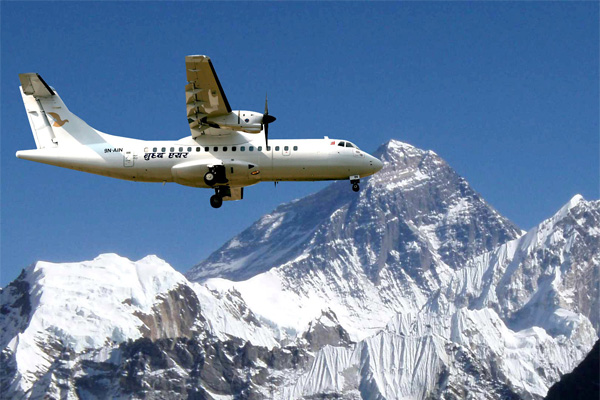 Get to Nepal from India by flight

Flights from New Delhi cost around 134 dollars for an economy flight which takes around 1 hour 35 minutes to cross to Kathmandu. There are more than 20 flights per day to Kathmandu from New Delhi, several of which are connecting flights that are a lot longer.

There is only one direct flight from Mumbai to Kathmandu daily, which takes around 2 hours 50 minutes to make the trip. Direct flights can cost around 200 US dollars for a single economy ticket and around 300 dollars for a connecting flight, many of which travel through New Delhi.

From Southern India, there is only one flight per day to Kathmandu from Bangalore (in the Indian state of Karnataka), which takes around 3 hours to make the trip. Indirect flights also run from Bangalore to Kathmandu, though New Delhi and Kolkata, which can take as long as 8 hours. Direct flights cost from around US$ 160 for an economy flight and leave Bangalore in the late afternoon.

Located in East India, Kolkata is the capital of the Indian State of West Bengal. There is only one daily flight that runs direct from Kolkata to Kathmandu, and which costs from around 180 US dollars for an economy ticket. With a flight time of around 1 hour 20 minutes to Kathmandu, it is a preferable method of travel from the west of India to Nepal, as the trains and driving to Kathmandu across the land border is a long and tedious journey. Indirect flights run regularly via New Delhi, which can take as much as 9 hours to get to Kathmandu with a long layover in the Indian capital.

0 Comment ON "Is a Visa Required for Entering Nepal from India? "