Delhi to Tibet Distance: How Far is It and How to Get to Tibet from Delhi

Officially known as the National Capital Territory (NCT), Delhi is a union territory which holds the capital of India. Located in the north of the country, Delhi is bordered by the Indian States of Haryana on three sides and by Uttar Pradesh in the east. This vast city has a population in excess of 26 million people, making it the second largest urbanized city in the world. The capital city, New Delhi, lies within the urban district of Delhi, and is the seat of all three branches of the Indian Government.

For most Indian citizens living in Delhi, Tibet is a distant land where the most sacred mountain in the world lies, Mount Kailash. And for many of the people of India, Tibet is a major pilgrimage location in Asia, because of the sacred Mountain Kailash and the stunning Lake Manasarovar, also a sacred site in the region.

Where is Delhi and Tibet

In relation to Tibet, Delhi lies on the other side of the Himalayas, far to the west of the region. And at just 216 meters above sea level, the Indian capital is around 3,000 meters lower than the Tibetan capital of Lhasa.

Distance from Delhi to Tibet by Road

If you are planning to take a Tibet tour from Delhi to Lhasa by road, then you are in for an immense journey that covers a total distance of 2,008 kilometers, taking the shortest route. The fastest route, however, is a distance of 2,175 kilometers. While it may be longer, and take a more roundabout route, the state of the major roads it uses makes it much shorter in terms of time, by around 6 hours.

How to Get to Tibet from Delhi by Road

Traveling to Tibet from Delhi by road is an immense trip that will take around 9-10 days if traveling to Lhasa. The route takes you from New Delhi, the capital of India, across the Indian State of Uttar Pradesh, to Nepalgunj, the Indo-Nepal border town in Nepal that is one of the most popular border crossing points from India in to Nepal. 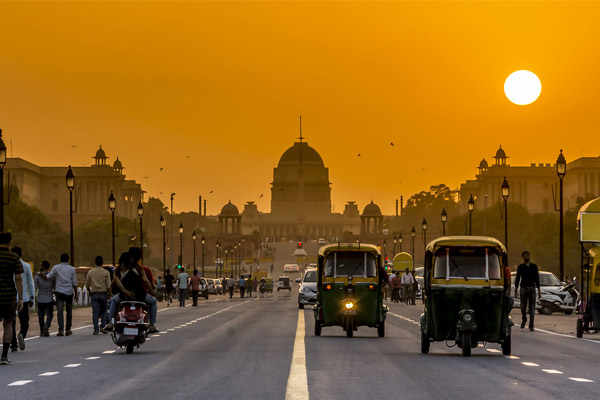 The immense trip to Tibet from Nepal by road will start from New Delhi and take around 9-10 days.

The fastest road to take travels through the city of Agra, the capital of Uttar Pradesh, and loops around to the south, heading northeast again after bypassing the city of Kanpur, and heading towards the Indian border town of Rupaidiha. Once across the border and into Nepal, it is a short drive to the Nepali town of Kohalpur, from where you will join the H01 Eastern highway, which runs all the way to Bharatpur, a distance of around 376 kilometers.

From Bharatpur, you take the Narayanghat-Mugling Highway (H05), which takes you to the main Prithvi Highway, the main road to Kathmandu, 160 kilometers from Bharatpur. From Kathmandu, it is a drive of around 6 hours to the border crossing at Rasuwa Gadhi, a distance of around 140 kilometers, most of which is on gravel or dirt roads as you get closer to the Sino-Nepal border.

While driving from Delhi to Tibet is one option for travelers from India, it is not a very efficient way to travel, as Indian nationals are not permitted to drive or travel independently in Tibet, so will have to leave their cars at the border with Tibet in Nepal. Buses can be used for this trip and while it would be a lot less expensive than driving your own car, it would take around twice as long to make the journey, as there are a lot of connections to be made on the route, and several do not have matching buses and will require up to a day of waiting for the next transport.

>> Check our 16 Days Highlights of India, Nepal and Tibet Tour by road.

Distance from Delhi to Tibet by Air

If you are flying from Delhi to Lhasa, then you are not going to be able to do it in one flight, as there are no direct flights from India to Tibet. By air, as a single flight as the crow flies, it is a distance of 1,361 kilometers from New Delhi to Lhasa, or around 839 miles.

How to Get to Tibet from Delhi by Air

Getting to Tibet from Delhi by air requires you to take a connecting flight to either China or Nepal. There are two ways to get to Tibet from India by flight, through Nepal’s Tribhuvan International Airport in Kathmandu or through one of the major airports in mainland China. 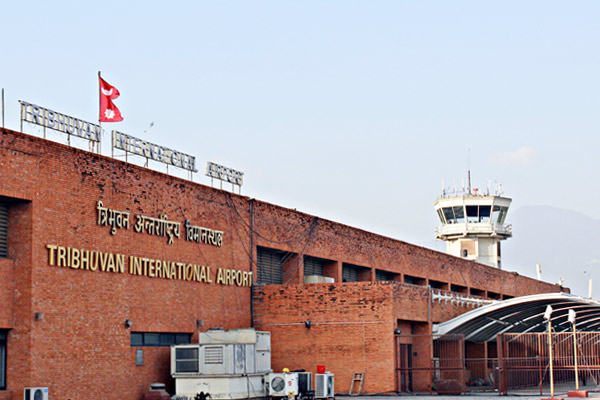 Getting to Tibet from Delhi by air requires you to take a connecting flight to either China or Nepal.

If you are traveling through Nepal, then you are going to need a flight to Kathmandu, the only place outside China that has direct flights to the Lhasa Gonggar International Airport. There are plenty of flights that run from New Delhi to Kathmandu, which can take as little as around 90 minutes or as long as 2 hours. Seven direct flights leave the Indira Gandhi International Airport in New Delhi daily, starting at around 6:45am, with the last daily flight leaving at around 7:40pm. Direct flights cost from around 273 US dollars to as much as 394 US dollars for a one-way economy ticket.

Indirect flights to Kathmandu from New Delhi, which can be useful if you are unable to get one of the seven direct flights, are a little more expensive, and the cost increases depending on which airport it stops at. Prices for indirect flights start at around 600 US dollars for an economy one-way ticket, and fly through either Mumbai, Bangkok, or Sharjah in the UAE.

Flights from Kathmandu to Lhasa run daily, and the number of flights per day depends on the season in which you are traveling., in the low seasons for Tibetan tourism, there is usually only one flight per day, but in the high season, normally the Tibetan summer from June to September, there can be as many as ten daily flights to Lhasa. Flights can be expensive, costing from around 350 US dollars and up, and are even more in the peak season for tourism in Tibet.

You can, alternatively, take a flight to China from New Delhi, and fly to Lhasa from one of the many airports in China that have regular, daily, direct flights to the Tibetan capital airport.

Flights from new Delhi run to Guangzhou, Shanghai, and Kunming as direct flights, although there are indirect flights to many other cities. All three of these locations have flights that run direct to Lhasa, and from Guangzhou and Shanghai, you can also get the train to Tibet. 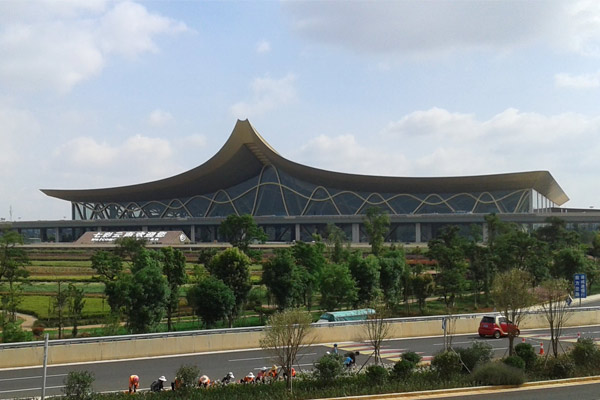 Kunming Changshui International Airport is one of the closest airports to Lhasa in mainland China.

A flight from New Delhi to Guangzhou takes around five hours, and can cost from as little as 561 US dollars for an economy ticket. Only two direct flights run to Guangzhou per day, which depart from Indira Gandhi International Airport at 11:55am and 11:30pm.

Flights from New Delhi to Shanghai are limited, with only one daily direct flight to the Chinese metropolis on the eastern coast of the country. The flight takes around 6 hours and ten minutes to cross the vast 4,252 kilometers between the two cities, and can cost from around 464 US dollars per person for a one-way economy ticket.

From New Delhi to Kunming, there is only one flight that runs direct, which runs every other day. The flight takes around 4 hours 40 minutes to get to the small yet international airport in Yunnan Province of Southwest China. The cost of the flight to Kunming Changshui International Airport from New Delhi is around 234 US dollars in the low season, and can go up to as much as 500 US dollars in the peak season for tourism in China.

Once in China, you can then get the flight to Tibet, and flights run from all three of the destination airports listed.

Flying from Shanghai is one of the longest flights from mainland China to Lhasa, and can take as long as 37 hours, if you are looking for the cheapest flight to the Tibetan capital. There are no direct flights to Lhasa from Shanghai, although the fastest indirect flights to Lhasa from Shanghai take only 7 hours 40 minutes, and can cost as little as 440 US dollars for an economy one-way ticket. The cheapest flights cost around 219 US dollars, and have layovers in Ningbo and Xi’an, before continuing on to Lhasa, while the fastest flights have a brief stop in Chengdu for an hour to take on passengers there.

Kunming Changshui International Airport is one of the closest airports to Lhasa in mainland China, with a travel distance of just 1,256 kilometers (780 miles). However, while it is the closer airport of the three, there is only one flight per day to the Tibetan capital, though it is a direct flight. The flight leaves from Kunming Changshui International Airport at around 12:40pm every day, and lands in Lhasa at around 3:45pm, a flight time of around three hours and five minutes. The flight costs around 187 US dollars in the low season for Tibetan tourism, and can go up to as much as 230 US dollars in the peak period.

0 Comment ON "Delhi to Tibet Distance: How Far is It and How to Get to Tibet from Delhi"