When is the Best Time to Visit the Indian Himalayas

Mighty Himalayas inspire awe in many ways. It is a region of the immense natural beauty unlike any other. The Himalayas consist of various mountain ranges spread throughout several countries – India, China, Nepal, Bhutan and Pakistan. Due to peaks featuring everlasting snow, the name of the range actually means “Abode of Snow.”

India has the largest part of the Himalayas. The Indian Himalayas boast endemic flora and fauna. Some wildlife species inhabiting these vast regions are snow leopard, Himalayan Yak and horned rhino. Furthermore, the Indian part of the mountain range features various pilgrimages. There, you will find Hindu, Buddhist and Sikh places of worship.

So, a journey through the Indian Himalayas isn't only about conquering mountain summits. It is also about admiring wildlife in national parks and learning about the local culture. Traveling on the world's highest road or railway is another spectacular solution. Every experience has a place and time when you should enjoy it. "So, when is the best time to visit the Indian Himalayas?" - You must wonder. Here we offer you the useful guide about where the Himalayas in India and when the best time is to visit these regions of Himalaya in India.

Where is the Himalayas in India?

The Indian Himalayas span northern regions of India. In northwestern parts of the country, these mountains extend through Jammu & Kashmir, Himachal Pradesh and Uttarakhand states. In the northeast, the mountain range spreads through Arunachal Pradesh, Assam, Sikkim and West Bengal.

Sikkim boasts Kangchenjunga (8586 meters/28169 feet), the world's third highest summit. The Hemis National Park, the habitat of snow leopard, is in Jammu & Kashmir. Find the Kaziranga NP, a home to horned rhino and barasingha, in Assam. Go to Mandi in Himachal Pradesh for the best spiritual experience in the Himalayas in India.

The Best Time to Visit the Himalaya Regions in India

Everlasting snow on the Himalayan Mountains makes people think that the weather of Indian Himalayas is mostly uniform. But that is far from the truth. Precipitation and temperature levels vary to a large extent. Temperatures tend to differ greatly, so you should prepare for any weather in this regard. The monsoon season is another main determinant about when and where you should go. The Himalayas in India feature different rainfall depending on the region. 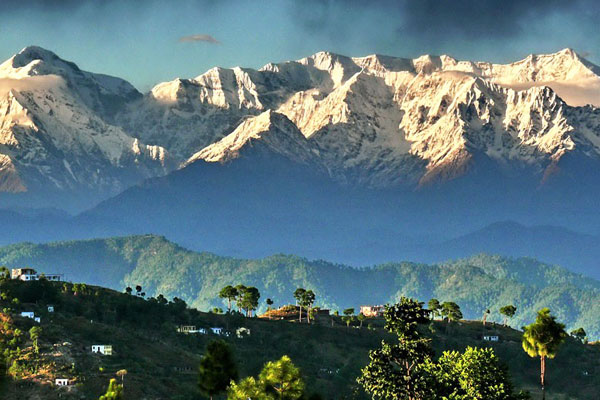 The best time to visit Himalayan mountains in India depends on many factors.

Rains are heavy in the eastern states of the country (Arunachal Pradesh, Sikkim and Assam) during summer. From June to August, the Jammu & Kashmir state offers the best outdoor experiences. As for Uttarakhand and Himachal Pradesh, they are also under the influence of the monsoon. But, certain peaks are suitable for scaling during summer, including mounts Kamet and Shivlinga among some others.

Winters are snowy in the Himalayas. Temperatures tend to be very low, down to -30˚C (-22˚F). So, you should avoid coming here during this season, in general. Yet, winter is the best time to visit the Himalayas in India for joining certain treks. Chopta Chandrashila, Lake Dodital and Dayara Bugyal are a few of them.

Summer is the best time for visiting the Himalaya regions in India given that you avoid the monsoon season. Prepare light cloth since temperatures reach their peak (up to 40˚C/104˚F).

Temperatures drop at a fast rate during autumn. Average lows decrease from around 25˚C/77˚F in September to around 10˚C/50˚F in November. In general, average highs remain above 25˚C/77˚F throughout. Autumn scenery makes this season the best time to visit Himalaya from the visual perspective. Snows usually start falling in November.

The Best Times for Himalaya Hiking and Mountain Climbing in India

Treks in the Himalayan Mountains are among the most popular treks in the world, such as the popular Everest Base Camp Treks in Tibet and Nepal. In fact, there are also popular trekking routes in India. For the best experience in winter, visit lower altitudes. You are likely to spot an elusive snow leopard in the Hemis NP this time of year. In Uttarakhand, a frozen freshwater Lake Dodital, surrounded by mountains, grants a scenic experience. Threading on the frozen Zanskar River during January and February is also unforgettable. 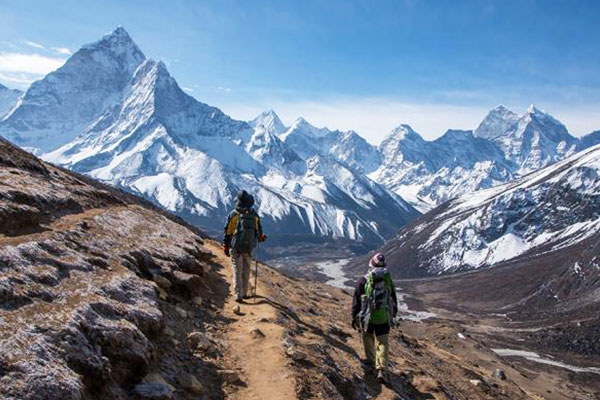 Himalaya trekking in India is popular among travelers.

The high trekking season kicks off in March and lasts until October. During the spring months, the countryside is verdant and colorful. Rivers are most powerful because of snow melting. But, if enjoying scenic views is your first priority, arrive in October or November. In these autumn months, views of mountain tops are clearest.

If you wish to test your mountain-climbing skills, some regions are better than others. In this regard, Jammu & Kashmir, Uttarakhand, Himachal Pradesh and Sikkim stand out. The best time for mountaineering typically lasts from May or June to October. Still, slight variations between the states of India are possible.

If Mount Jopuno in Sikkim is on your list, you can start in March and end in November. Make sure to avoid the summer months in this destination for the best experience. Mount Satopanth in Uttarakhand is another exception from the rule. The season there kicks off in late May and ends in October. June and September are other ideal months for climbing Mt Satopanth.

Travel Tips for Visiting the Himalayas in India

What to Pack for Your Indian Himalaya Tour?

Suitable gear is essential for trekking the Himalaya Mountains. Make sure that your footwear is sturdy, waterproof and reliable. In all probability, you will traverse windy areas, so bring windproof and waterproof cloth. Sunscreen and sunglasses are also mandatory, regardless of the season. Secure waterproof rucksack to keep your belongings dry. Double check the equipment provided by a trek operator so you don’t miss something.

First aid kit containing antibiotics and remedies for headache, nausea and other ailments is essential. Keep yourself hydrated with a lot of water and bring snacks. Finally, don't underestimate the importance of trekking pole.

How to Avoid Altitude Sickness while Trekking in Indian Himalayas?

Setting a proper pace is important for avoiding symptoms of the altitude sickness. Such symptoms start to appear at the altitude of around 2400 meters/7875 feet. Headache, nausea, fatigue and loss of appetite are some common manifestations.

The thing is that these troubles aren't caused by altitude itself. Rather, their appearance depends on the rate of your advance. If you advance slowly, your body has time to accommodate to the lack of oxygen. That's why people capable of setting up a quick pace often suffer from the altitude sickness.

Gaining up to 460 meters (1510 feet) in altitude per day is an ideal pace. Also, try to rest at a lower altitude than the highest you reached that day. Finally, rest every third day during your ascent (spend two consecutive nights at the same spot).

How to Be Safe?

Mountains tend to be perilous, the Himalayas most of all. Hence, you are strongly advised to hike these mountains in a group. Some people are after a personal experience, which excludes trekking with other tourists. If you are one of them, hire a reputable local guide (the Sherpas before others) to assist you during the expedition.

As a reliable Tibetan local travel agency, we offer kinds of tours in India, Nepal and Tibet, which take you to fully explore the Himalaya regions. No matter you are looking for a long vacation to these destinations or just a short break, or a specific adventure in one of them, you can contact us for professional travel advice. Our seasoned travel experts will help you arrange your lifetime trip to the great Himalaya kingdoms.