Planning a trip from Tibet to Bhutan is not a straight route across the Himalayas. Instead of being able to travel straight south from Lhasa to Thimphu, you will need to travel via Nepal and India to get to Bhutan when traveling overland. With no border crossing between China and Bhutan, travel across the Himalayas that way is impossible. The best option is to travel across the border at Gyirong Port and into Nepal, then travel to Bhutan from Nepal. The route is long and arduous, and would take several days to get to Thimphu, the Bhutanese capital. Road conditions in Nepal and parts of India are not the best in the region, and you would need visas for all four countries before traveling.

Traveling from Tibet to Bhutan is an epic adventure that would take around 33 hours of continuous driving. With average distances and hours per day, it would normally take around four days to complete the driving part of the trip, though in reality, with stops for touring and sightseeing, you can expect this kind of journey to take around seven to ten days, plus the time you would spend in Bhutan.

The total overland trip covers a huge distance across four different countries, totaling around 2,013 kilometers (1,251 miles). An immense journey, the road conditions on the trip do vary depending on which country you are in.

Tibet to Nepal Overland: 1,194km and how to travel

Across the Tibet Autonomous Region of China, the roads are relatively good, having been replaced with asphalt surfaces for the entire distance from Lhasa to Gyirong at the border with Nepal. The section heading down to the Everest Base Camp (EBC) is a dirt road, and not too good. However, it is only a short distance, compared to the rest of the trip across Tibet. The total route from Lhasa to Kathmandu covers a distance of 1,194 kilometers (742 miles), including the side-trips to Gyantse and EBC.

Once you cross the border into Nepal, the roads do get worse for a while. From Rasuwa Gadhi to around Bidur, the road condition is awful, with dirt and gravel roads combining with very low quality and damaged tarmac roads in some places. From Bidur to Kathmandu, the roads are much better, and paved well with asphalt. The same goes for the road from Kathmandu to Kakarbhitta, with the first section of the road being well-paved, and the rest being generally pretty bad. 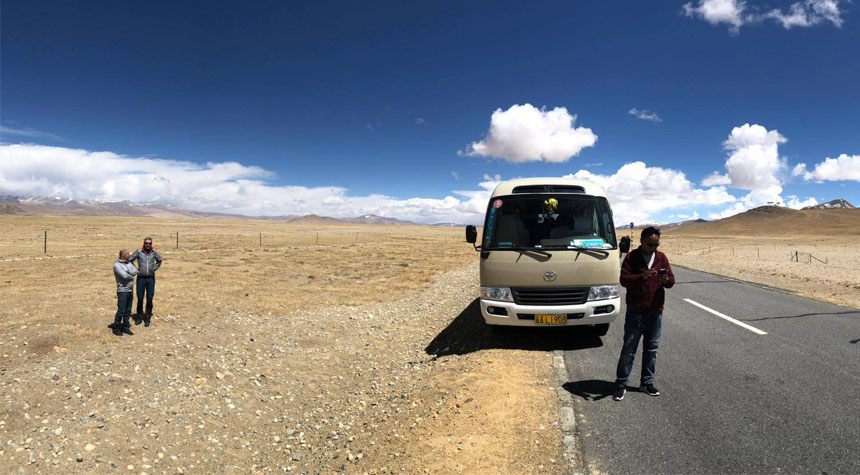 Make a stop while traveling overland from Lhasa to Kathmandu

However, despite having some poor road conditions, this is one of the most outstanding trips in the world, taking the overland route from the City of Sunshine, Lhasa, to the exotic capital of Nepal, Kathmandu. The route, once you depart from Lhasa and the stunning sights of this amazing city, takes you through Gyantse and Shigatse, and on to the famous EBC. Then you backtrack to head northwest to Gyirong, to cross the border and travel to the beautiful capital of Nepal. And before you head off any further, you can spend a few days exploring the beauty and culture of the amazing Kathmandu Valley.

Traveling from Tibet to Nepal does require visas and permits, and some of these need to be obtained by your travel agency before traveling. Before you can enter Tibet, you need to be booked on a pre-arranged tour with a registered travel agency. Independent travel is not permitted in Tibet. As well as the Chinese Entry Visa, you will also need to have the travel agency arrange the Tibet Travel Permit and Alien’s Travel Permit in order to travel across the plateau to Nepal. And when you arrive at the border, you will need to apply for the Nepal Entry Visa to enter the country from Tibet.

Nepal to Bhutan Overland: 816km and how to travel

The roads in Nepal are not as good as across Tibet, and while some roads to major destinations are better and asphalt surfaced, most of the route to Kakarbhitta in eastern Nepal is average to low quality roads. A little-used route, since it is easier to fly to Bhutan, this road is mostly used by local buses, which run between the major towns and cities. However, there is a long-distance bus that runs the route in around 17 hours. The road is relatively good for the first part through the Kathmandu Valley, but as it gets further from the capital, the road conditions do deteriorate somewhat. 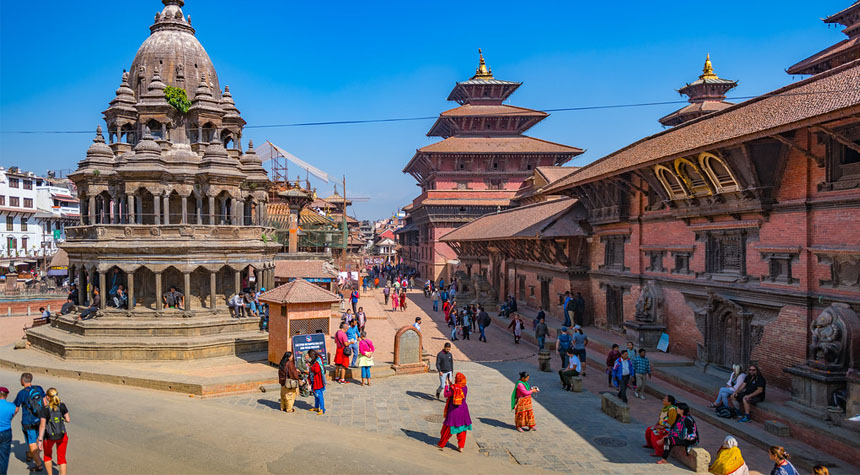 The route from Kathmandu to Kakarbhitta on the eastern border with India covers a distance of around 480 kilometers (298 miles). There is little to see along the route after you leave the Kathmandu Valley except for the natural landscapes and the beautiful scenery of the southern Terai region of Nepal. While attractions are few, the views of the Himalayas to the north are spectacular, and you can often see wildlife running through the plains and along the fringes of the dense sub-tropical jungles along the border with India.

Once you reach Kakarbhitta, you will need to cross the border to Panitanki, from where you can connect to Siliguri to get across the Indian State of West Bengal to reach the border with Bhutan. This can be done by road or rail, and the rail journey is preferable, as the roads are not in such great condition. Trains can be boarded at Siliguri, not far from Panitanki, and you can ride the rails to Hasimara, the closest railway station to Jaigaon, on the India-Bhutan border. By road and rail, the distance to Jaigaon is around 173 kilometers (107 miles). Once across the border, you will normally be met by your guide and driver, and will be driven to the Bhutanese capital, Thimphu. The drive takes around four hours, and covers around 163 kilometers (101 miles). 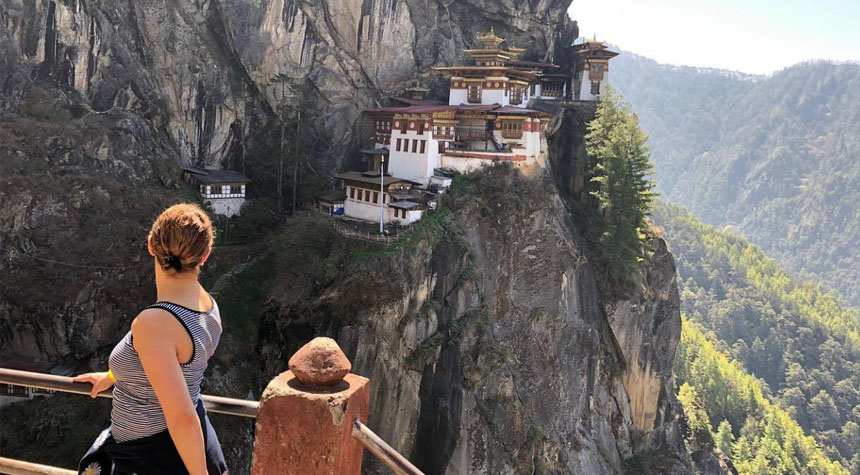 Travel from Nepal to Bhutan requires visas for both Bhutan and India. While you can get a transit visa for India, it is actually cheaper and easier to just get a normal 30-day multiple entry visa for tourism. The transit visa only allows you three days of transit through India, and costs around 25 dollars per person. If you are coming back the same way from Bhutan, you will need another transit visa. The multiple-entry tourist visa allows you to cross in your own time, as many times as you like, and costs less than two transit visas. You also need the visa for Bhutan, which is applied for by the travel agency on your behalf when you book your required tour of the kingdom. Independent travel is not permitted in Bhutan for international tourists, so you need to book your pre-arranged tour with a local travel agency.

Instead of traveling overland to Bhutan from Nepal, it is much better to take a flight from Kathmandu. And there are several reasons why this is an advantageous route choice. Travel overland from Nepal to Bhutan means crossing India. And with the cost of the travel and the need to apply for visas, which have to be done in advance, it can be a lot easier to travel to Bhutan by flight. 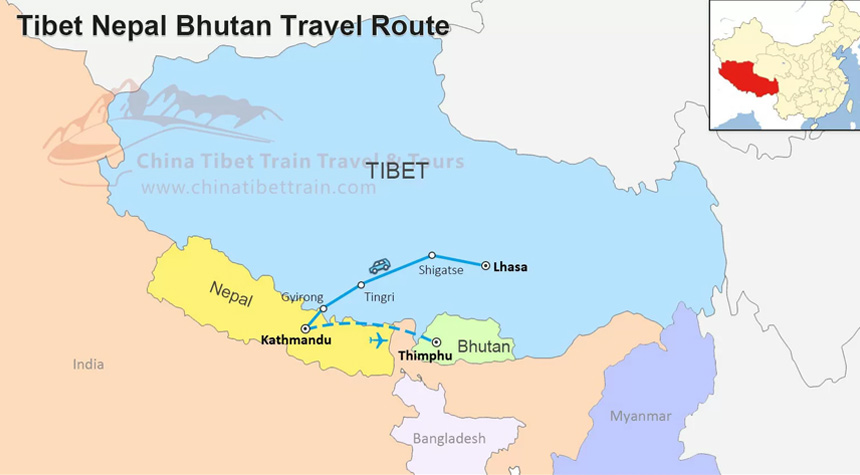 Once you have completed the overland trip from Lhasa to Kathmandu, and spent the time you need in the Kathmandu Valley and Nepal in general, you can get the flight direct from Tribhuvan International Airport to Paro. Flights from Kathmandu to Paro take around 2 hours, and cost from as little as 230 US dollars per person for a one-way economy flight.

Combining your overland adventure from Tibet to Nepal with a flight to Bhutan and tour of the last true Himalayan kingdom is a great way to make the most of your time in the Himalayas. And as a major tour operator for Tibet Nepal and Bhutan, we can handle all of your permit and visa requirements to make this the trip of a lifetime.
>>Here you can take a glance of 13 Days Classic Tibet Nepal Bhutan Overland Tour

Nepal and Bhutan have very similar climates, with the peak seasons for travel being in the spring and autumn, from March to May and September to November. These spring and autumn peak seasons are the best times to travel to both Nepal and Bhutan, and are when the skies are clear and bright, temperatures are generally comfortable, and there is little to no rain at all.

Spring and autumn are also good times to visit Tibet, as the main period for tourism in the region runs from April to October. The spring and summer seasons in Tibet are also clear and bright times of the year, with very little rain and clear skies for the best views of the mountain peaks.

Hotels on this trip are going to be very different, and your choice of hotel normally depends on your own personal preference, as well as your budget. In Bhutan, hotels are included as part of the overall package price, known as the Minimum Daily Package (MDP). The inclusive hotels are normally at three-stars, and are comfortable and pleasant, with heating, restaurants, hot and cold running water, and all the amenities you would expect. And if you want to upgrade, you can do so for an additional fee on top of the MDP.

Hotels in Tibet and Nepal vary depending on what you are looking for and where you are traveling. In the major cities in Tibet, you can find all of the range of accommodation, from small local guesthouses to four or five-star hotels. However, outside the cities, you will find only more basic accommodation, though some of them may surprise you with their modern amenities. In the most remote areas, basic accommodation is all that is available, with no running water, no showers, and usually no heating.

In Nepal, you have the options for staying in 4-5 starred hotels down to small local guesthouses and backpacking hostels. Nepal has hundreds and hundreds of cheap places to stay, so you are never far from a great little guesthouse. And the hostels are great places to meet new people for trekking companions. The major basic accommodations are found on the trekking trails as teahouses. These are simple places to stay in when hiking in the Himalayas, and are a great way to trek, with real beds to sleep in, even if there is no heating or running water.

Taking the epic tour of Tibet, Nepal, and Bhutan together is an awesome experience, and one that you should not miss out on. Traveling overland is also a great way to explore the best of the destinations you are visiting, and is one of the cheaper options when it comes to travel. However, flying to Bhutan from Nepal is the better choice, as overland travel through India can be expensive and complicated. But whichever way you choose to travel, you are guaranteed to have the time of your life in the mighty Himalayas.