Nyingchi Mainling Airport is the only airport served in eastern Tibet that opened for ordinary tourists. It brings great convenience for tourists to get to Nyingchi directly.

Recently, only few domestic cities in mainland China offer daily flights to Nyingchi, such as Chengdu, Chongqing and Xian. Here are the detailed information about the flights schedule to Nyingchi Mainling Airport and how to get to the town upon you arrive at the airport.

Located in the Mainling County of Nyingchi, Nyingchi Mainling Airport (IATA Code: LZY), also known as the Lin Zhi Airport, is one of five airports in Tibet, though only the Lhasa Airport offers international flights.

The third airport in Tibet, the first two being Lhasa Gonggar International Airport and Qamdo Bangda Airport, Nyingchi Airport was opened in August 2006, shortly after the first trains made their way along the Qinghai Tibet Railway to Lhasa.

Difficulty of Landing at Nyingchi Airport

Probably the most challenging airport in the world for pilots to land at, all landings at Nyingchi Airport are classed as instrument landings due to the winding natural valley that makes up the approach to the airport’s single runway. 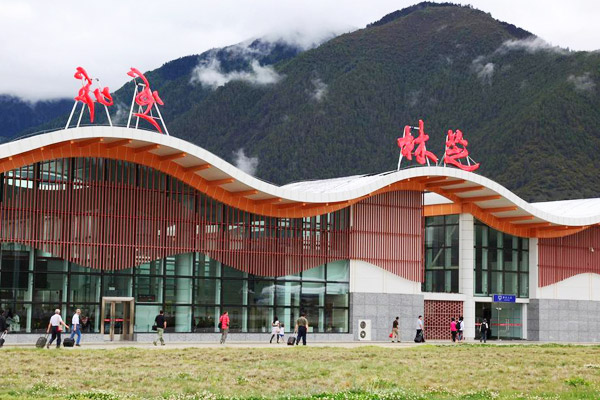 Nyingchi Mainling Airport is known as "the world's most difficult airport for planes to reach".

Nyingchi Airport lies at an altitude of 2,949 meters above sea level, and while it is not the world’s highest airport (that honor belongs to the Daocheng Yading Airport in Garzê Tibetan Autonomous Prefecture of Sichuan Province at 4, 411 meters above sea level), it is the airport with the least number of days suitable for landings due to extreme weather conditions. Landings at Nyingchi Airport can only be done on around 100 days per year.

The cost of the flight does depend largely on the airline carrier, with Tibet Airlines being the less costly of the three at just US$ 128 per person for a one-way economy ticket. Sichuan Airlines is the most costly of all three flights, with the 2 hour 15 minute flight costing as much as US$ 133 for the same one-way economy flight.

While Xi’an Xianyang International Airport has hundreds of flights from all around the world landing at Shaanxi Province’s main airport, there is only one daily flight from Xi’an to Nyingchi, which is offered by Sichuan Airlines.

The flight runs daily to the Nyingchi airport, and takes just 2 hours 50 minutes to cross the 1,471 kilometers to the plateau’s third airport. The flights are also reasonable priced, at around US$ 193 per person for an economy one-way flight.

Lanzhou Zhongchuan International Airport in Gansu Province currently has one daily flight that runs six days per week, with no flights currently running on Fridays.

The flight, which takes around 2 hours 5 minutes to cross the 1,133 kilometers from the Gansu provincial capital to Nyingchi in southeast Tibet, costs from around US$ 180 per person for an economy one-way ticket with Tibet Airlines. The flights depart daily at around 9:10am.

Shenzhen Bao’an International Airport in Guangdong Province currently has just one daily flight to Nyingchi Airport, which is provided by China Southern and leaves daily at around 6:00am.

The flight takes around 3 hours 55 minutes and costs from around US$ 327 per person for an economy one-way ticket.

How to Get to Nyingchi Mainling Airport

While Nyingchi Mainling Airport may be one of the hardest places to land in the world, it is a very busy airport, and is swarming with tourists through the summer months.

With more than a dozen daily flights into and out of the airport, it is a good idea to book tickets early.

Getting to the airport from places nearby is not too hard, and for most travelers from outside China, you will be taken there by your guide or driver.

Location and Distance to Nearby Attractions

The airport lies around 50 kilometers from Nyingchi City, and it takes around an hour to drive there, using the Mainling Airport Expressway. The airport is ideally located for travelers touring the area, and is close to several popular attractions in Nyingchi. 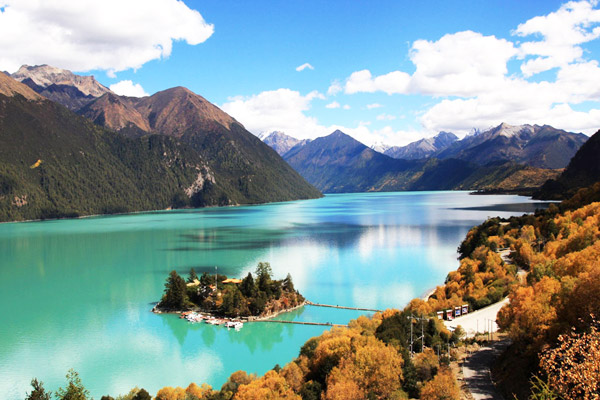 The turquoise Draksum Tso Lake is one of the most famous scenic spots in Nyingchi.

Mount Namche Barwa, the famous mountain at the entrance to the Yarlung Zangbo Grand Canyon, lies around 150 kilometers to the northeast of the airport, and while it is a great place to get to, there are no major roads to the mountain, only dirt and gravel tracks, and some trekking.

The famous Midui Glacier, which is rated as one of the top six most beautiful glaciers in China, lies around 360 kilometers to the east of the airport, and around 100 kilometers from the county seat of Bome County.

Transfer from Airport to Bayi Town

Getting from the airport to Bayi Town, the center of Nyingchi city is relatively easy. It takes about 45 minutes to drive 51km from Nyingchi airport to Bayi town through the Airport Expressway and G318 National Road.

There are shuttle buses and taxis available for local Tibetans and domestic travelers. There are only two shuttle buses per day, and they leave from the Civil Airport Base only when they are full. Taxis are a good option for getting to Bayi Town, and while more expensive, are a lot more convenient.

For international travelers, who are not familiar with the language and the local streets, we offer the airport pick-up service. Upon arriving at Nyingchi airport, you will meet our local Tibetan travel guide, who will take you to your hotel.

Required Travel Documents for Taking a Flight to Nyingchi

If you are planning on taking a flight to Nyingchi from mainland China, then you will need to have certain documents ready with you before you can board the flight.

Your Passport with China Visa

A valid passport and Chinese Entry Visa are essential for traveling to Nyingchi, and will be required before you can even enter China. They are also needed for some of the other permits that you will need in order to get to Nyingchi from mainland China. Visas can be obtained before you leave for China from the nearest Embassy of the People’s Republic of China, and take around three days to process.

For all trips to Tibet, you will need the Tibet Travel Permit before you can travel to the region, and it is actually required to board the flight to Nyingchi. 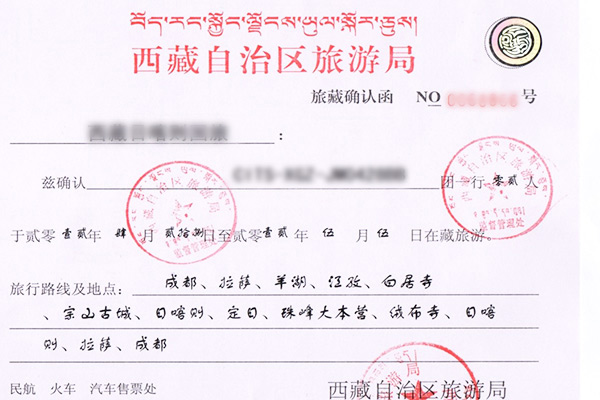 A sample of Tibet Travel Permit.

This permit is required for travel into Tibet and for travel in the area of Lhasa, and can only be obtained once you have booked a tour with a registered Tibetan tour operator.

Once you have booked your Tibet tour, we will make the application on your behalf using scanned copies of your passport and visa.

The processing time is normally up to 20 days, but it can be faster in the low season. Once the permit has been approved and received, we will forward it to your hotel in China.

As Nyingchi lies outside Lhasa, and indeed outside the usual “opened” areas of Tibet, there are other permits that you will need.

The Alien’s Travel Permit is the second-level permit you will need, and is required for travel outside Lhasa, to the “opened” areas of Tibet. The permit is normally obtained by us once you arrive in Lhasa, but since you will travel direct to Nyingchi, the permit will be obtained using the scanned passport and visa, and your Tibet Travel Permit in advance of your trip. This will also be forwarded to your hotel, along with the Tibet Travel Permit ready for your trip.

The Military Permit is required for travel outside the opened areas of Tibet, in parts of the region that are considered to be “military sensitive zones”. This is normally applied for along with the Tibet Travel permit, as it can take up to 20 days to process. Again, this approved permit will be forwarded to your hotel ready for your trip.

When is the Best Time to Fly to Nyingchi

The Best Time for Nyingchi Tours

The best time to travel to Nyingchi is from April to June and September to November, during the spring and autumn seasons. Summer in Nyingchi is the rainy monsoon season, and lying at a lower altitude and in the far east of Tibet, Nyingchi gets more monsoon rains that the rest of the plateau. Heavy rainfall in the area can often cause landslides in the mountainous region, as well as severe flooding and flash floods from the mountains.

The Best Time for Discount Tickets

As with most places in Tibet, the low season often means discounted prices for airline tickets, accommodation, and entrance to many of the attractions in the area. And since Nyingchi is lower than the rest of the plateau, the winter months are not as harsh in much of the area. Heavy snow can often be found in the mountains, but in the lower-lying areas, winters are relatively mild, on a par with a normal European alpine winter.

What if I can’t get a flight ticket to Nyingchi for my Nyingchi tour?

If you are having trouble getting a flight to Nyingchi in the peak season, then there is another option to get there.

Flights to Nyingchi are often fully booked well in advance in the high season for tourism, and this will mean that your best option is to fly to Lhasa and travel overland to the area.

Flights to Lhasa are more frequent than flights to Nyingchi, and can be obtained more easily. Or you can travel by train to the Tibetan capital.

From Lhasa, there is a new expressway that runs from the Tibetan capital to the seat of Nyingchi, which has made travel to the area much easier and faster.

Nyingchi lies around 380 kilometers to the east of Lhasa, and the trip can be done in one day, traveling along the Lhasa-Nyingchi High-Grade Highway.

This four-lane asphalt highway runs direct to Nyingchi, and its faster road surface means that the trip can be cut from eight hours to just five hours of driving.