Tibet is a place that is well known for its festivals. Throughout the year there are a huge number of festivals in the region, both local and national, and spending time in Tibet during some of the festivals can give a unique insight into this mystical, Buddhist culture. From the Tibetan New Year to the Spring Sowing festival and the Butter Lantern Festival to the Nyingchi Peach Blossom Festival, at the right time of the year there is a festival for almost everything. 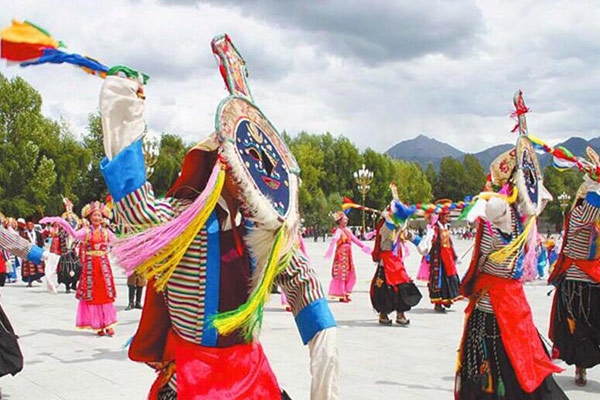 One of the most popular festivals for tourists is the Shoton Festival, that will be held between August 21 and August 27, 2018. And the time to book your trip for this unique event is now.

In Tibet, the Shoton Festival is one of the major festivals in the Tibetan calendar. The celebration marks the end of the Yarné - the 100-day summer retreat of the Tibetan Buddhist monks. The festival traditionally starts on the last day of the sixth month of the Tibetan calendar, and lasts for around 6 days. It consists of celebrations of eating yogurt, Tibetan operas, and the unveiling of Tibetan Thangka paintings. However, the origins of the Shoton Festival are very different than the festival that is seen today. 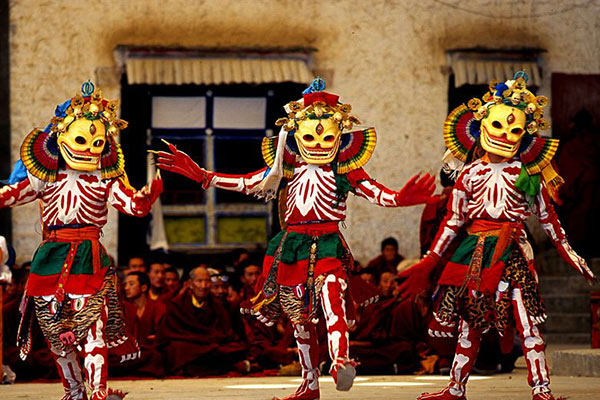 Originally, the festival was purely religious, and focused on the end of the Tibetan monks would end their retreat. It was the tradition for the local people to give yogurt to the monks, which gave the festival its name. In Tibetan, “Shoton” means “yogurt banquet”. According to history, the founder of the Gelug sect of Tibetan Buddhism, Tsong Khapa, ruled that all lamas perform a period of meditation from the fourth to sixth months of the Tibetan calendar. 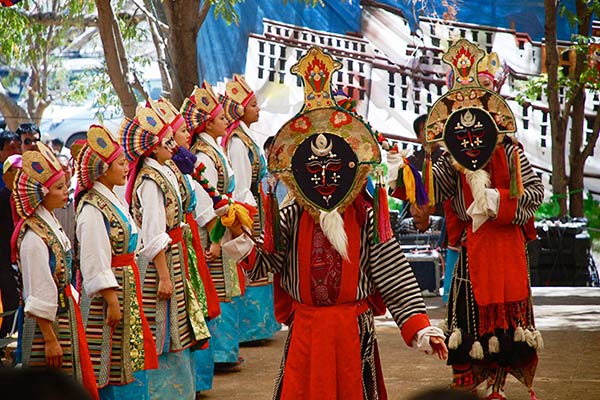 At the end of the meditation, the monks would come out of seclusion, and the pilgrims who came to pray at the monasteries would offer homemade yogurt to the monks, who had been performing religious rituals inside the monasteries. For the pilgrims, it was a way to show their thanks for the love and protection of life that the monks spent months paying penance for.

Nowadays, the festival has incorporated other themes, including Thangka unveiling and Tibetan opera, but the main theme of the festival is still the eating of thick, creamy, Tibetan yogurt. 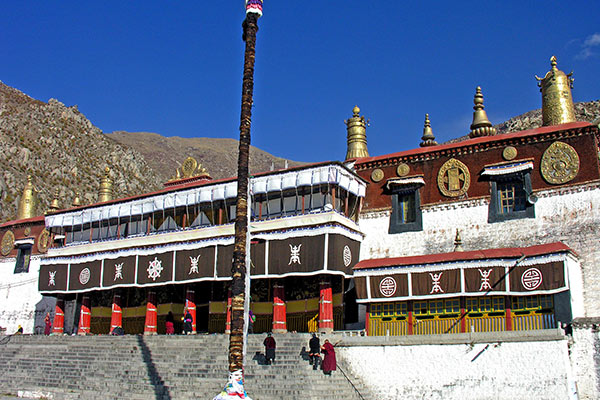 The festival begins with an unveiling of the Thangka at Drepung Monastery, after which the celebrations begin in earnest. The tranquil valley of Drepung becomes filled with excitement as the lamas carry out a huge Thangka painting to the sound of a loud horn that reverberates across the valley. The Thangka is a portrayal of Qamba Buddha, also known as Maitreya, and is carried across to the western wall of the monastery, where it is set upon a special platform. 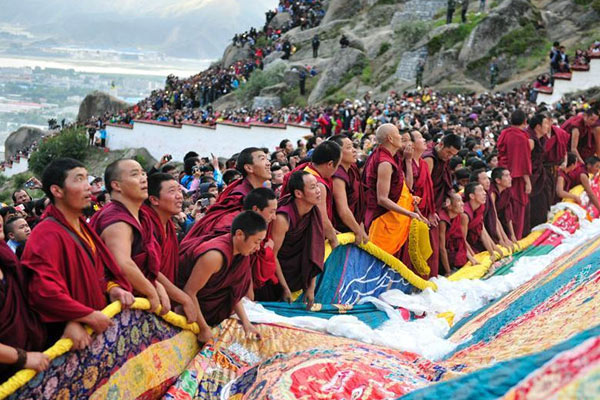 Unveiling of the Thangka at Drepung Monastery

As smoke rises from all around the valley, horns start to sound and the monks and lamas chant the sacred scriptures. The huge Thangka is slowly unrolled to its full size, and the scene goes a little crazy, with thousands of people rushing to offer their white hada. While the painting is open, the air is filled with flying hada, and the ground is covered with pilgrims and locals prostrating themselves before the giant Buddha painting. After just two hours, the Thangka is rolled up and removed to the monastery, where it will stay until the next Shoton festival.

The day after the unveiling, residents of Lhasa and tourists alike gather in the park of Norbulingka, the summer palace of the Dalai Lama, and celebrate the festival by eating yogurt and watching the many Tibetan operas that are shown. Opera troupes from all over Tibet gather at the park to perform various Tibetan operas, from professional companies to amateur troupes. The operas are performed from around 11am to dusk every day, at the Norbulingka park and at the park near the Potala Palace. Both parks are festooned with colorful tents and flags, and both old and young alike attend. 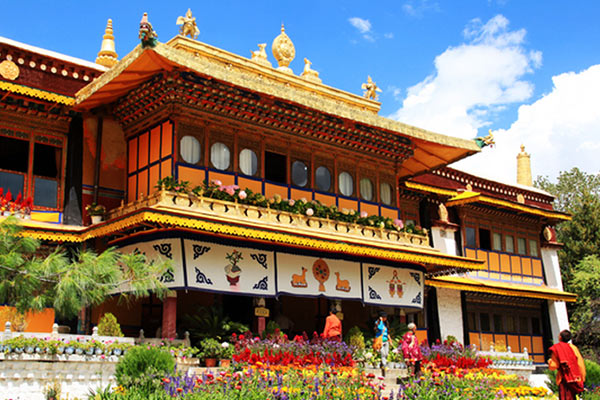 Tibetan operas are normally very long, and can go on for days, so the operas performed at the Shoton festival are shortened versions of the originals. Time is limited, and the performers all want to have their performances shown, so the operas are a distilled version of the real thing.

The Shoton Festival is one of the grandest occasions for Tibetans, and is a major event in the Tibetan calendar. And for getting a view of real Tibetan festival culture, there is nothing better than Shoton for the thousands of foreign visitors to Tibet.