2019 Chunyun is Coming: How to Visit Tibet during the Spring Festival Travel Rush

From January 21 to March 1 is the 2019 Spring Festival Travel Rush in China, which is also known as Chunyun in Chinese. During this time, billions of Chinese will return to their hometown from where they work, reunite with their families, and be aware of the traditional Chinese New Year. The annual Chunyun period is also known as the world's largest human migration. 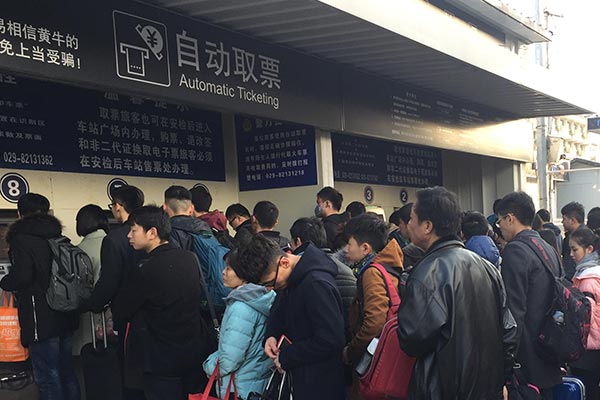 Many passengers lineup to pick up their train tickets at the station.

Though most China train tickets are under great demand during this period, it is relatively a low season for trains to Tibet. There are still some Tibet train tickets from Beijing, Shanghai and other cities available. To catch the last chance to visit Tibet before the Spring Festival this year, it is time to book your Tibet train tour now.

Winter is too cold to visit the remote areas in Tibet, such as Mount Kailash and Lake Yamdrok in Ngari. And the road to Lake Namtso is often closed due to the heavy snow.

However, it is alright to visit Lhasa and Shigatse, the central Tibet and go further to the Everest Base Camp. If you plan a Tibet tour in winter, you can spend a week to the Mount Everest or just a short stay in Lhasa, the holy city, for about 4 days. The general trip to Shigatse from Lhasa can be finished within 6 days.

Notice: Please apply for your Tibet travel permit at least 15 days before you go.

1. Book your train ticket as early as possible, especially the train tickets from major cities, such as Beijing, Shanghai, Guangzhou, etc.

2. It will be very crowded with a huge flow of people during the Spring Festival travel rush. As a result, it usually takes more time to pass the security check and queue up for the pit stop. Therefore, it is highly suggested to arrive at the railway station at least 2 hours in advance.

0 Comment ON "2019 Chunyun is Coming: How to Visit Tibet during the Spring Festival Travel Rush"