Standing tall at 6656 meters, Mount Kailash is one of the world’s most revered places. It is recognized as the center of the world by Hinduism, Tibetan Buddhism, Bonism, and Ancient Jainsim. As the main peak of the Gangdise Mountains, Mount Kailash is located in remote region of western Tibet. Close to the south of this scared mountain lies the holy Lake Manasarovar, which is known as the “invincible lake”.

Every year, a significant number of pilgrims make their devout journey to the center of the universe, namely, the Mount Kailash and Lake Manasarovar region in Tibet. Though an ultimate dream trip for all pilgrims and lots of adventurous tourists, the Kailash Manasarovar trekking tour requires great endeavors, owing to its special geographical location, rough environment, and long distance from other places. This guidance will give you a clear idea about the Kailash Manasarovar distance from different places, and help you to understand how to reach this holy area from each departure point.

Distance from Tibet to Kailash Manasarovar

Situated in the southwest of Tibet, Mount Kailash is about 100 km to the north of Purang County of Ngari Prefecture. As Lhasa is in the eastern part of Tibet which covers a large land on the high plateau, the road distance from Lhasa to Kailash Manasarovar is quite long, approximately 1400 km. Between Lhasa and Mount Kailash lies the important county of Saga, a key point to Mount Kailash. The distance from Saga to Manasarovar is about 450 km by road. The following are the Kailash Manasarovar distances within Tibet area.

Note: Takalakot is known as Purang (Burang) in Tibetan, is the administrative center of Purang County, Ngari Prefecture of the Tibet Autonomous Region.

Travel from Lhasa to Kailash Manasarovar

For people planning to travel to Kailash and Manasarovar from Lhasa, there are a few routes to take. Among them, the most popular one is the southern route, which is shorter and extends along the well-paved highway. Starting from Lhasa, the southern route leads west to Mount Kailash, via Shigatse, Lhatse, Saga and Paryang, before reaching Darchen, the small village at the foot of Mount Kailash.

The traffic condition on the road is good and worry-free, with the first part along G318 Highway and the last part along G219 Highway. And it is suggested to spend two days in Lhasa for sightseeing and acclimatization to high altitude before this road trip.

Besides, for foreign travelers who want to experience a Mount Kailash tour, one must join in an organized Tibet tour and obtain the required Mount Kailash travel documents. Travel permits for Mount Kailash can take up nearly one month to process, thus it is advised to contact a local travel agency in Tibet at least 8 weeks before your scheduled day of your trip.

Distance from Kathmandu to Kailash Manasarovar

As the capital of Nepal, Kathmandu is in the central region of Nepal. The distance between Kathmandu and Kailash Manasarovar by road is about 984 km. Although the distance is shorter compared to that from Lhasa, travelling from Kathmandu to Mount Kailash needs to traverse the lofty and continuous Himalayas Mountains, crossing some of the most precipitous terrains in the world.

Travel from Kathmandu to Kailash Manasarovar

There are mainly two ways to get to Mount Kailash and Lake Manasarovar from Kathmandu, Nepal. The first route is to fly from Kathmandu to Lhasa, and then follow the overland route from Lhasa to Mount Kailash. This route is quite easy to take, suitable for tourists who want to enjoy the best of both Tibet and Nepal. 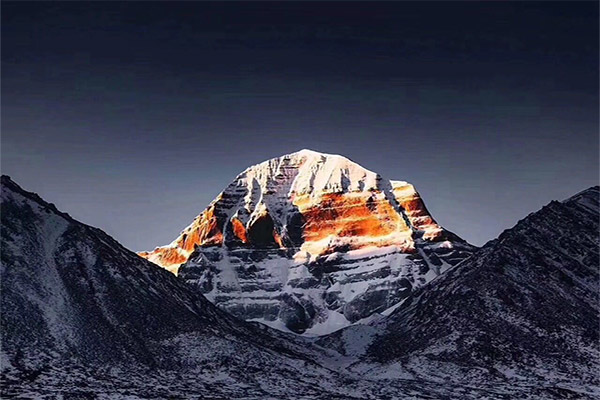 Travelling from Kathmandu to Moutain Kailash can be done either by flight or road trip.

The second route is to take an overland trip from Kathmandu to Mount Kailash, by crossing the border of Nepal and China. You will drive from Kathmandu to the Nepal border at Rasuwagadhi, and then cross Gyirong Port, the border at Tibetan side. After entering Tibet, there is a long drive from Gyirong Town to Darchen, covering about 593 kilometers. The driving route first reaches G219 Highway at Saga, and then continues northwest to Darchen, via Paryang.

Similarly, when traveling to Tibet from Nepal, tourists need to obtain some required travel documents, including Group Tourists Visa and Tibet Travel Permit, as well as Frontier Pass, Alien’s Travel Permit and Military Permit for Kailash tour. Tibet Visa in Nepal should be obtained by your tour operator, which also handles your tour in Tibet. For more detailed information, please feel free to contact us.

Distance from India to Kailash Manasarovar

Separated by the Himalayas Mountains running east to west, the distance from India to Mount Kailash by road can be very long due to terrain reason. Check the following table for the detailed Kailash Manasarovar distances from different place of India.

Note:
1. Sikkim is an inland state of India, located in the south of the Himalayas, bordering China to the north and Nepal to the west.
2. Nathula Pass (4310m) is a mountain pass in the Himalayas in East Sikkim district. It connects the Indian state of Sikkim with China's Tibet Autonomous Region, as one of the three open trading border posts between China and India.

Travel from India to Kailash Manasarovar

To reach Mount Kailash and Lake Manasarovar from India, one can cross the India-China border at Nathu La Pass in Sikkim. Located about 56km away from Gangtok, the road to Nathu La Pass via Tsomgo Lake is motorable and suitable for senior citizens unable to undertake arduous trekking. On the way, you will pass Kangma, Lazi, Zongba, before reaching Darchen. This 1500-km road journey from Nathu La to Kailash Manasarovar is shorter and comfortable compared to the old route via Lipulekh Pass.

Besides, Indian pilgrims can, take the route to Mount Kailash via Nepal. You can first enter Nepal at Nepalgunj, on the Indian border, and then cross the country to Hilsa, where you will cross the border bridge into Tibet. Once you enter Tibet, your driver and guide in Tibet will meet you and drive you to Purang, following the S207 road north to Kailash and Manasarovar. It is suggested to stay a night or two in Purang (3890m) before you head to Lake Manasarovar and Darchen. This route requires both time and energy, and the cost on the journey will not be cheap. But the route is an awesome one that very few foreign travelers take.

One thing should be noted is that: for Indian pilgrims travelling to Mount Kailash, there are only two organizations that can authorize the Indian pilgrimage in Tibet: The Foreign Affairs Office and the Pilgrim Center. The two organizations can arrange the itinerary, transportation, accommodation and any other requirements on the trip. And the visa for pilgrims is issued jointly by the Tibetan Foreign Affairs Office, the Tibet Military Region, the Armed Police Tibet Frontier Corps, and the Department of Public Security.

After travelling a long journey to Mount Kailash and Lake Manasarovar, both tourists and pilgrims will welcome the Kailash kora, the holiest and most challenging part during the Kailash Manasarovar Yatra. The kora around this holy mountain takes about 3 days, covering a total distance of 56km in a clockwise direction. Generally, it starts from Darchen, then passes through three valleys, before finally goes back to Darchen. On the way, tourists would spend one night in Dirapuk monastery and another night in Zutulpuk monastery. 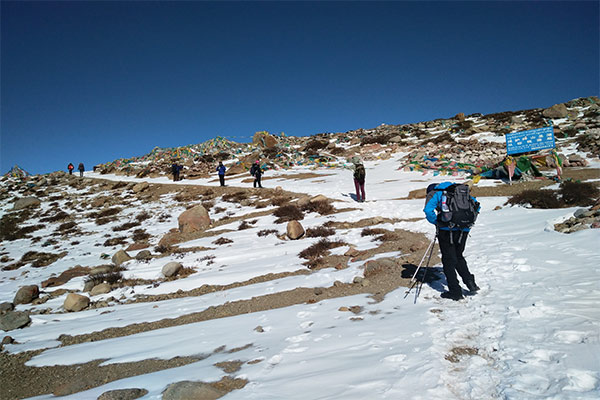 It will normally take 3 days to complete the kora around Mount Kailash.

Day 2: Drirapuk Monastery (5,210m)- Zutulpuk Monastery (4,790m) (18km) The second day of the kora is a total trekking trip for 18 km. You will trek over Dromala Pass (5,630m), the highest pass during the Kora. On the way, you will see locals prostrating in the Kora path. It will take about 7 to 8 hours to reach Zutulpuk Monastery.

The best time to visit Mount Kailash and do the Kailash kora is from May to June and September to October, since the roads is closed during winter and spring. And it is suggested to bring some food and warm water during the kora, since the food sold in the tents on the kora circuit is much higher. To experience a complete pilgrimage tour to holy Mount Kailash and Lake Manasarovar, we recommend the classic 15-day Tibet and Mount Kailash tour, which covers all the highlights of Tibet and can ensure you a comfortable and pleasant journey along the pilgrimage path.