How to Get to Mount Kailash and Lake Manasarovar

Located in the far west of Tibet, in the Ngari Prefecture, it is a long journey to get to Mount Kailash and Lake Manasarovar. Generally, it takes at least four days from Lhasa, and often a lot longer. No matter you are ordinary travelers enjoying a Tibet tour with Mount Kailash trek from Lhasa, or as a pilgrim to do the Kora from India and Nepal, there are several routes that you can take to the holy Mountain. You can choose where you are starting from, and check the detailed transportation guide about how to get to Mount Kailash and Lake Manasarovar.

From Tibet to Mount Kailash and Lake Manasarovar

For people traveling to Kailash and Manasarovar from Lhasa, there are a few routes that you can take, although the southern route is the most popular, as it is shorter and travels over less rough terrain. Whichever route you took to get to Lhasa – whether from Kathmandu by flight or from China by Tibet train or flight – you will need a couple of days to acclimatize to the altitude. Travelers normally spend two days in Lhasa, touring the sights, before heading out on the road to Kailash and Manasarovar, to better acclimatize to the altitude of the plateau, before traveling to even higher altitudes in the far Ngari Prefecture in the west of the region.

From Lhasa to Mount Kailash by Road

When you take a Mount Kailash tour from Lhasa, first, you can drive through the G318 from Lhasa to Shigatse, often via Gyantse for those who are touring the region en route to the holy mountain. Then it is on to Saga, where you can stop for the night, and Paryang, where it is a good idea to spend a day acclimatizing before you reach Darchen, as the altitude at Paryang is a lot higher than in Lhasa. 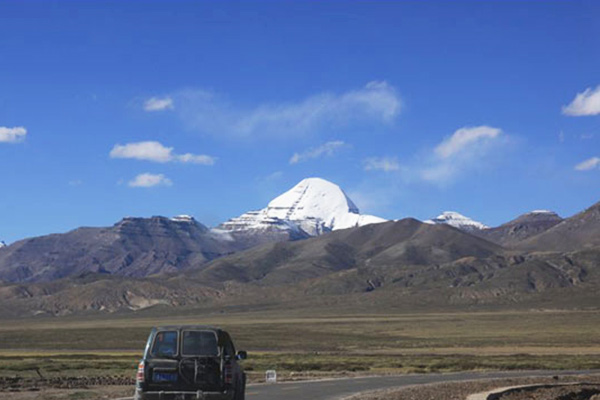 Lhasa to Mt. Kailash by road

For those traveling to Kailash from Lhasa, you need to be on an organized tour, booked through a registered tour operator, which supplies the permits, guide, driver, and private vehicle. While it is not a requirement to be part of a group for your tour, it is useful to do so as it can reduce the cost quite drastically, and save you money.

Before traveling to Lhasa from China, you will need to arrange your tour with the tour operator, and let them organize your permit. For all foreign visitors to Tibet, a Tibet travel permit is required, which the tour operator obtains from the Tibet Tourism Bureau (TTB). This is required to get on the train or flight from China to Lhasa, and to travel anywhere in Tibet. 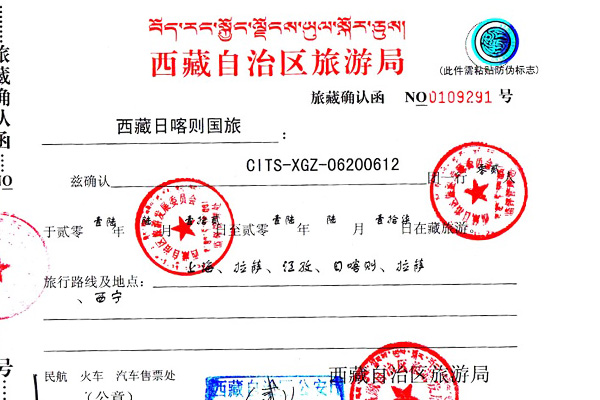 For getting to Kailash from Lhasa, you also need a couple of other permits, which can be obtained from the respective departments in Lhasa by your tour guide. The Alien’s travel permit, which is provided by the Public Security Bureau in Lhasa, is required to travel outside the area of Lhasa itself, and off to the western areas of Tibet, which are not restricted for access.

Another required permit is the Frontier Pass, which you will need if you are planning to visit any area near the border with Nepal, such as Mt. Everest and Mt. Kailash, or are exiting Tibet into Nepal. It is applied for through the Armed Police Tibet Frontier Corps in Lhasa by your guide. And finally, for access to Mt. Kailash and Lake Manasarovar, visitors are also required to obtain the Military Permit, which is to allow travel to certain parts of the military restricted zones in Ngari Prefecture. This is also obtained by your tour guide before you leave Lhasa.

It should be noted that only the tour operator can obtain the necessary permits to travel to an in Tibet, and individual applications for the Tibet Travel permit will not be accepted by the Tibet Tourism bureau.

From Nepal to Mount Kailash and Lake Manasarovar

For all visitors traveling from Nepal to Tibet, there are two ways to get to Mt. Kailash and Lake Manasarovar. The first, and easiest route, is to fly from Tribhuvan International Airport in Kathmandu to Lhasa Gonggar International Airport in Tibet, and then follow the overland route from Lhasa to Kailash. This is by far the easiest route to take, and tours to Kailash and Manasarovar are available from the major tour operators in Tibet and China. 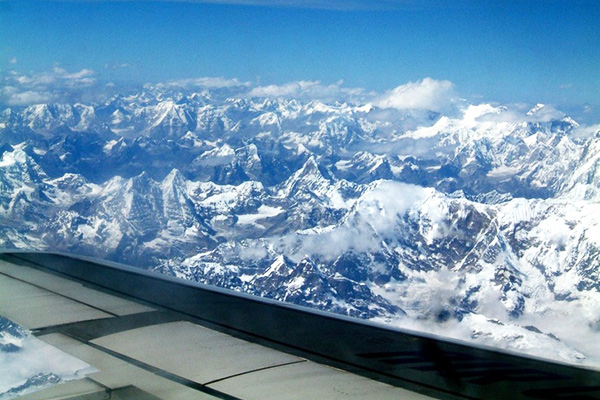 Fly to Lhasa from Kathmandu over the eastern Himalaya

The second route is to take the overland road from Kathmandu to the border crossing at Rasuwagadhi, and crossing the border to Gyirong port, before traveling overland to Mt. Kailash. From the Tibetan side of the border, an organized tour is required, with guide and driver, who will be there to pick you up from the border crossing point. From there it is a short drive to Gyirong Town, which is normally the first stop for the night.

From Gyirong Town to Darchen is a route that covers 593 kilometers and takes around 11 hours of non-stop driving. However, if you are on a tour, then there will be other stops along the way. From Gyirong the road heads north until you reach the G219 at Saga. From there the road turns northwest and heads to Darchen, the staging point for the Kailash kora trek, via Paryang.

Altitude Changes along the Way

With the trip from Kathmandu to Mt. Kailash, there is an altitude change of more than 3,200 meters, which means that you would be likely to get altitude sickness if the trip is done too quickly. With the massive increase in altitude from Kathmandu (1,350m) to Gyirong (2,700m), it is advisable to stop there for a day to acclimatize, before continuing the trip. After acclimatizing, you can drive on to Saga, at 4,450 meters, and Paryang (4,600m), where you can stop for a day, and give yourself time to acclimatize before the final leg to Darchen.

As the altitude at Paryang is similar enough to that of Darchen and Manasarovar, there is no further need to acclimatize once you reach Darchen, and you can spend some time exploring before taking the kora around the mountain and visiting the lake.

Traveling to Tibet from Nepal also requires certain visas and permits before you will be able to get into the region. There are subtle differences in the permits required for travel from Nepal than from China. The first thing that is different is the Chinese Entry Visa. This is not required for travel into Tibet from Nepal, and is replaced with the Group Tourist Visa, which will cancel any other Chinese visa you have in your passport. The application for the Group Tourist Visa can take from 4-5 days to process, so it is important to arrange your trip through a registered tour operator as early as possible before your planed date of travel. Once you have booked your tour, your operator can apply for your Tibet Travel Permit for you, using the scanned copy of your passport. 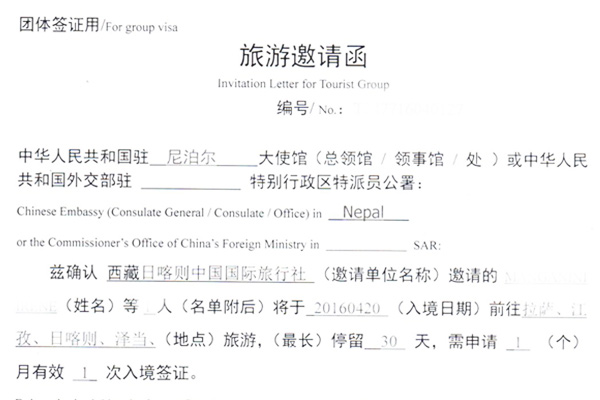 You will also need the Frontier Pass, the Alien’s Travel Permit, and the Military Permit, which the tour operator will also obtain on your behalf. It should be noted that the Chinese Embassy in Kathmandu does not accept individual applications for the Group Tourist Visa, and all visitors to Tibet from Nepal must use a registered tour operator to obtain the visa.

From India to Mount Kailash and Lake Manasarovar

Unlike most other nations, Indian travelers to Tibet are classified into two different groups for their trip to Tibet. For those who are traveling to Tibet to tour around the region other than Mt. Kailash, you will be treated as an ordinary tourist, whether you enter from China or from Nepal. However, if you are traveling to Tibet specifically for the Mt. Kailash pilgrimage, or are intending to visit Kailash and Manasarovar as part of your tour, you will be classed as pilgrims, for whom there are a separate set of rules. 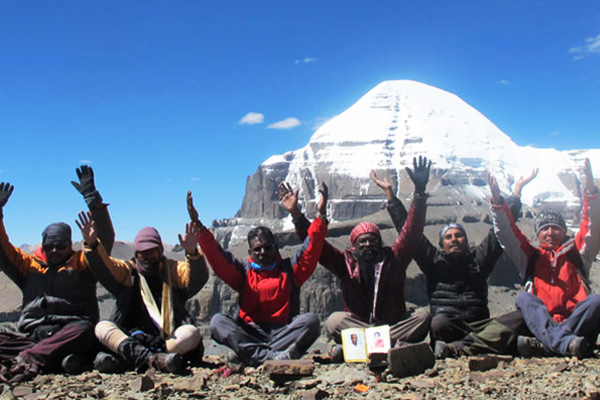 Travel to Kailash as Indian pligrim

For those traveling as pilgrims to Mt. Kailash, or are including Kailash as part of their tour, the Tibet Visa for pilgrims is a completely different process for application. The visa for pilgrims is issued jointly by the Tibetan Foreign Affairs Office, the Tibet Military Region, the Armed Police Tibet Frontier Corps, and the Department of Public Security.

For Indian’s traveling as pilgrims, there are only two organizations that can authorize the Indian pilgrimage in Tibet; the Foreign Affairs Office and the Pilgrim Center, which is short for the Tibet-India Pilgrim Reception Center, which is located in the Tuanjie New Village, in Lhasa. These two organizations can arrange all of the practical aspects of the trip, including the accommodation, transport, guides, yaks, itinerary, and any other requirements.

Apart from the usual routes to Tibet through China and Nepal, Indian pilgrims can take another route that brings them across the border a lot closer to Kailash than Gyirong Port. The route enters Nepal at Nepalgunj, on the Indian border, and crosses the country to Hilsa, on the Nepali border with Tibet. Crossing the border at Hilsa, pilgrims can then go through Burang in Tibet, and follow the S207 road north to Manasarovar and Kailash. The trek to Kailash from Burang takes around three days.