Located in the far west of Tibet, in the Ngari Prefecture, Mount Kailash is the sacred mountain of four religions and the location of the most popular high-altitude trek in Tibet. The highest mountain in the Gangdise Range of the Transhimalaya in Tibet, Mount Kailash lies at an altitude of 6,638 meters (21,778 ft.) above sea level.

Set in one of the harshest environments on the plateau, the climate around Mount Kailash has generally warm days for the spring, summer, and autumn months, but with colder nights often dropping to around or below freezing. In its remote location in the far reaches of western Tibet, this amazing mountain is best visited from April to June and September to October, when the weather is at its best for tourists and pilgrims alike.

With the remote location and harsh climate, the best times to visit this sacred mountain are in the spring months of April, May, and June, and the autumn months of September and October.

April is the start of the tourism season in Tibet, and is one of the best times to visit Mount Kailash. As the spring starts, the cold winter temperatures that have had Kailash in their grip begin to warm up, reaching to almost 0°C during the day, although still dropping to as low as -15°C at night. While the kora trek is once again open for tourist to tackle, majority of the area is still covered with snow, which normally does not melt until around mid-April. Fierce winds across Dolma La Pass can also be a hindrance to the trek, but the general visibility is excellent and some of the best views of the summit of the sacred mountain can be had in early spring.

Kailash Manasarovar Weather in May

May is generally considered the “true” beginning of spring in Ngari, and the temperatures around Mount Kailash are finally creeping up above the freezing mark, with highs of around 15°C throughout the month and average temperatures hitting around 8°C. However, nights are still pretty cold, ranging from 1°C to around -1°C, and leaving frost on the ground in the mornings. While the tourists are now in full swing, the mountain is still warming up to the season, but the weather in general is comfortable and makes trekking even more pleasant. Winds have dropped a little through the valleys, but can still reach up to 11km/h through the Dolma La Pass.

June in Ngari is still spring, while in the eastern and central areas, it is the beginning of summer. While Lake Yamdrok, Lhasa, and Nyingchi are seeing rains of up to 100mm this month, Kailash barely sees as much as 12mm for the whole month, leaving it dry and comfortable for hiking. Temperatures during the daytime have increased greatly, averaging around 13°C, and reaching as high as 19°C on especially warm days. Lows of around 6°C at night also mean that the nights are not so cold now, and with clear skies throughout and great views of the mountain, June is still one of the best times to take on this arduous trek. 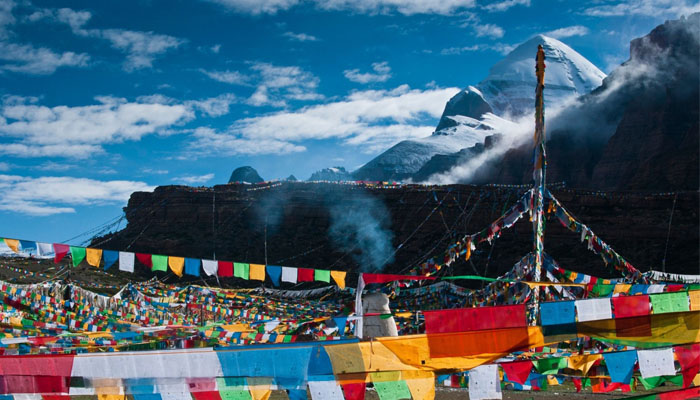 Kailash Saga Dawa Festival usually falls between May and June.

May or June is also the time of the famous Saga Dawa Festival in Tibet, depending on the Tibetan calendar. One of the most outstanding festivals in Tibet, the Saga Dawa ceremonies and celebrations at Mount Kailash outstrip the rest of the region in traditional authenticity and spectacular experiences.

During the devout religious ceremonies, which always consist of lots of chanting of sutras and smoking branches of mulberry and juniper, the flagpole at Tarboche is taken down and the prayer flags replaced to send new blessings across the world. After the religious ceremonies, the tourists and pilgrims all take to the trail to make the ritual kora trek around the world’s most sacred mountain. As the absolute best time to be in the area of Mount Kailash, this stunning festival, which celebrates the birth, enlightenment, and death of Buddha, is one you should not miss. - See more at our Kailash tour.

After the long rainy season of the monsoon in Tibet, temperatures start to cool a little from the heat of August, from the summer 22°C to as cool as 20°C. While it may not appear much, this is a huge drop in Ngari, where the winds make it feel cooler still. Average temperatures across the month range at around 10°C, with the nights finally dropping down to around freezing again. September is one of the best times to trek around Kailash, as the clear weather has returned bringing bright sunny skies, while the landscape is still in its lushest from the monsoon rains of August. Once again, that warm jacket is now a requirement in your packing. 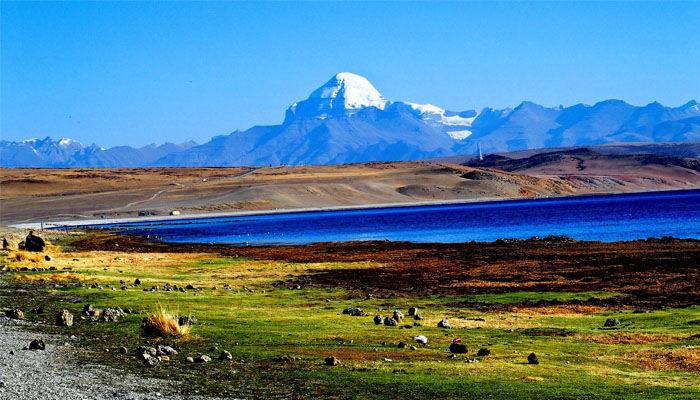 Scenery around Kailash Manasarovar in September

As October rolls around the temperatures in Ngari are starting to drop faster, and at Mount Kailash, the weather is beginning to get colder. Winds are picking up more, hitting speeds of around 15-18 km/h through Dolma La, and the land is drier, with less than 2mm of rain for the whole month. Temperatures average as low as around 6°C for the month, with highs of only 19°C and lows dropping to as cold as -7°C at night. However, despite the colder nights, October is still one of the best times in the year to visit Kailash, as it is also when most of the Tibetan pilgrims make their way across the vast plateau to perform the ritual kora around the mountain. Walking and prostrating for hundreds, or even thousands of kilometers across Tibet, these devout pilgrims them commence their hike around the mountain, many completing one circuit in a single day. 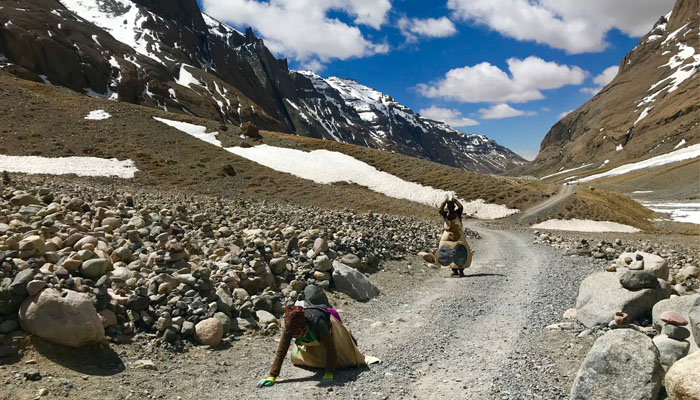 Can I tour Kailash Manasarovar in monsoon season (July and August)?

Unlike some areas of Tibet, the summer months of July and August are nowhere near as wet in the area around Mount Kailash in Ngari. The mountain’s beautiful pyramidal peak is still clearly visible in the bright summer sky, despite the region seeing more rain per month in the monsoon season. The area can sometimes be a little wet, but overall, it is still possible to take on the kora trek in the summer. Just bring your rain mac.

While you can expect around 190mm of rain in July around Ngari Prefecture, there is actually not as much that falls on the mountain, as it is a little more protected by the surrounding range than the flatter areas of western Tibet. Temperatures around Kailash average around 15°C, with highs of 22°C during the day, dropping down to just 8°C at night. With warmer nights, and most of the rain falling late in the day, the warmer days make the trek a little more challenging, but not impossible.

Once again, you can expect rain around the mountain through August, though not as much as most of Tibet sees. And with most of the rainfall coming down in the late afternoon and evening, there is little to stop trekking around the mountain. Temperatures are at their highest, reaching highs of as much as 23°C during the hottest days of the month. Nights are also warmer, reaching around 6-8°C with average temperatures throughout the month of around 15-16°C. August can see a few more clouds around the peak of the sacred mountain, but you should still get enough clear days to get a good view of the Kailash summit.

Is it possible to travel to Kailash Manasarovar in winter (November to Next March)?

As the winter months come around, November begins to get very cold in Ngari, and it is often the start of the snowy months around Mount Kailash already. Daytime temperatures in winter are already dropping to below freezing, and nights can see lows of around -15°C in November to as low as -18°C in January. Snow covers the high pass of Dolma La, and the roads around the mountain and Lake Manasarovar to the south are often snow-covered as well by January, making it almost impossible to get to the sacred mountain. For the best winter tours of Tibet, and for the best views of outstanding mountains, you can still travel to the Tibetan capital of Lhasa throughout the winter. And for those that love the snowy weather of the plateau, it is still possible to take the long road out to the Everest Base Camp throughout all of the winter months.

Where to Check Current Weather in Kailash Manasarovar

The internet has a great number of sites that can give you the current weather statistic from anywhere in the world, and that includes the area around Mount Kailash. Since this sacred mountain has become so popular, many of the weather sites have the mountain in their daily database, so you can get a good idea of the real temperatures and weather conditions, which is useful for planning your own tour to the region and the mountain. A simple Google search is all that is needed to stay up to date with up-to-the-minute weather conditions at Mount Kailash. And our Tibet travel gurus are already here to sort out more details for you. Just feel free to send us your inquiry and the reply will reach you within 24hrs.

What to Pack for a Kailash Manasarovar Tour

What you take to Mount Kailash in terms of clothing really depends on the time of year you are visiting. In general, the main packing list for clothes you need for Tibet and Mount Kailash should really include thick woolen sweaters, thick warm pants and warm fleece or down jacket, waterproof/windproof jacket, a warm hat or hooded jackets, several T-shirts, and decent warm gloves. On top of the usual gear for Tibet, you also need a good pair of hiking boots, with ankle support and good grip, as the route around the mountain is rough and rocky. 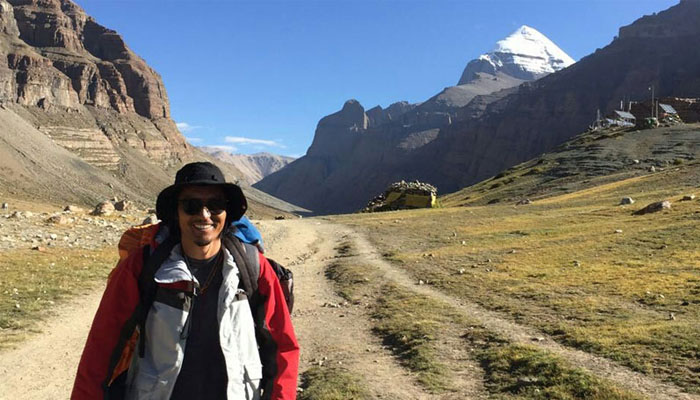 Packing right is very important for the 3-day Kailash Kora.

You will also find it useful to bring sunglasses for the bright sunlight throughout the whole season, as well as sun block, moisturizers, and lip balm, to protect your face and lips from sunburn and wind chaffing. A good backpack is essential, and it must be comfortable enough to carry all the gear you need for the whole trek, as the vehicle cannot meet you anywhere in the kora route. Leave any non-essential gear with the driver in the vehicle, and bring only what you really need, to keep the weight down. Hiking poles are also useful, as the rough and rocky climb up to the pass at Dolma La is steep and arduous. - See more at what to pack for Mount Kailash trekking tour

The best travel time to Kailash Manasarovar are from April to June and from September to October for the comfortable weather and stunning landscapes. And you can still see Mount Kailash clear in month of July and August but it’s not suggested to visit Kailash and Manasarovar in Winter from November to next March for the chilly weather and bad road conditions.