The epic Mount Kailash Kora trek is the hardest trek in Tibet and lasts for three days. Covering a distance of around 52 kilometers, the trek has two overnight stops, usually at two of the five monasteries around the sacred mountain. Accommodations on this trek are basic, to say the least, and you should not expect the style of comfort you can get in Lhasa. Similarly, the food you can find is also basic, and mostly Tibetan dishes, though some simple Chinese noodle dishes can be found here too. For most travelers taking on the trek around the sacred mountain, we can provide here the details you need to know so that it does not come as a surprise when you reach Mount Kailash.

The first day of trekking around Mount Kailash is the leg of the route from Darchen, the small village at the foot of the southern face of the sacred mountain, to the Drirapuk Monastery, the second monastery on the outer kora route. The first day is not the easiest, but it is not as hard as the climb up to the Drolma La Pass on the second day. The first day of trekking normally starts from Sarshung Village, and runs for around 14 kilometers to the first night’s stop. 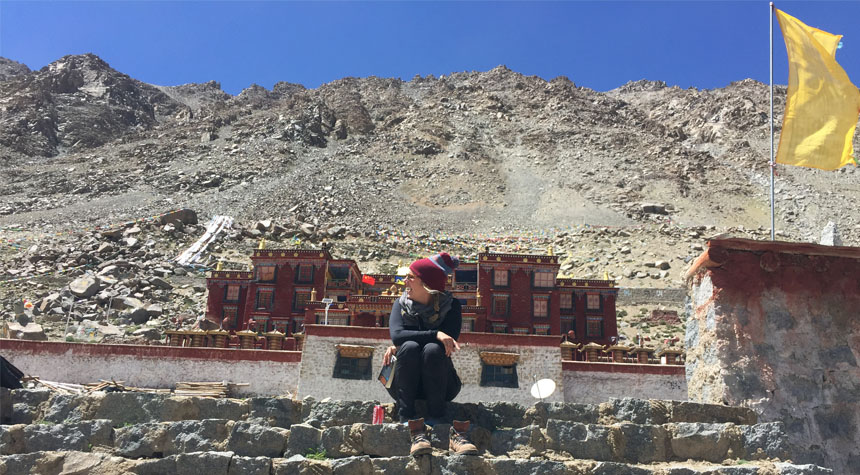 Rest in front of Chuku Monastery

Most people take the eco-bus to Sarshung Village, and begin the trek there, at the Two Legs Pagoda. A few kilometers after you leave the village, you come across the first of the monasteries, the Chuku Monastery. Legends say that the three artifacts in the monastery were once stolen to be taken back to Guge, but they scared the robbers so much they gave up and left them behind. Below the monastery is the bridge across the Lha-Chu, the river that flows down the valley below Kailash’s western face. To get there, you pass a number of long Mani-stone walls.

After passing the bridge, you can choose to trek on the eastern or western bank of the river, and the eastern bank is the usual pilgrimage trail. The western bank has some lush grasslands alongside it, and you can get your first views of the western face of the mountain to your right as you walk.

You do have the option to stay in the monastery guesthouse at Drirapuk when you arrive, though it is not always possible due to the large number of pilgrims in the peak seasons. The guesthouse is rather basic, and charges just 50 yuan for a bed for the night. Rooms are generally clean, though the bedcovers are often not changed between users, so it is a good idea to bring a sleeping bag. There is no bathroom, and the toilets are located in a small hut outside the main guesthouse. Hot water is only available for hot drinks, and cold water is available from the pump for washing. There is no Wi-Fi and power supplies are limited. 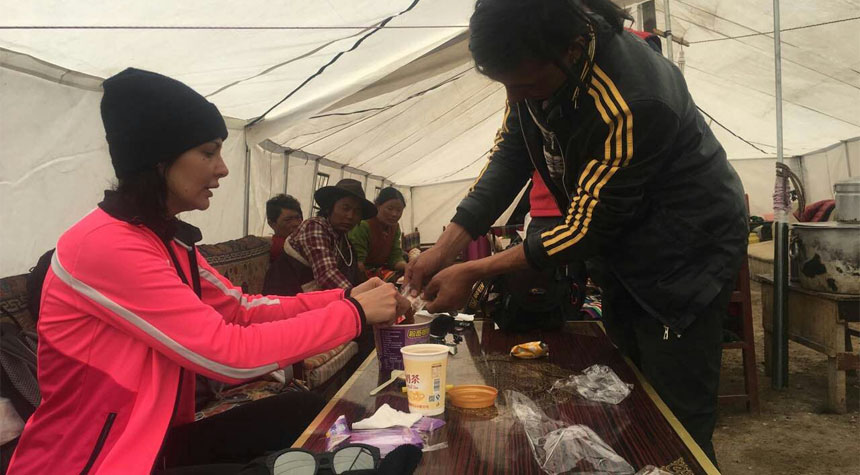 The other option for sleeping is to camp overnight in tents of your own, and many people prefer this in the summer months. There are camping spots just below the monastery which are open and free to use. You can also turn right before the iron bridge below the monastery, and stay at the Shishapangma Hotel, though the rooms are just as basic as the monastery and more expensive. However, it is a good spot for sunsets on the mountain’s northern face.

The duty room of the monastery has packet noodles for sale, and hot water to prepare them, as well as tea and coffee for those that want it. The Shishapangma Hotel also sells just instant noodles and packet food, and has hot water available only for guests. The best option for dining on at the Drirapuk Monastery is to bring your own food from Lhasa when you travel here.

The trek on the second day takes you from Drirapuk Monastery to Dzultripuk Monastery, the last of the monasteries on the outer kora. The trek follows the natural valley up to the Drolma la Pass, and then down the other side, to Dzultripuk. Overall, it is around 18 kilometers between the monasteries, and takes around 7-8 hours, depending on how fast you reach the top of the pass.

The biggest highlight of the day is reaching the crest of the Drolma La Pass, at 5,630 meters above sea level. The pass is one of the best locations on the hike to get a good view of the summit of Mount Kailash, and has some amazing views out over the Gangdise Mountains.

Around half way between the Drirapuk Monastery and the Dzultripuk Monastery lies the sky-burial site that sits a little higher than up the southern slopes of the valley. 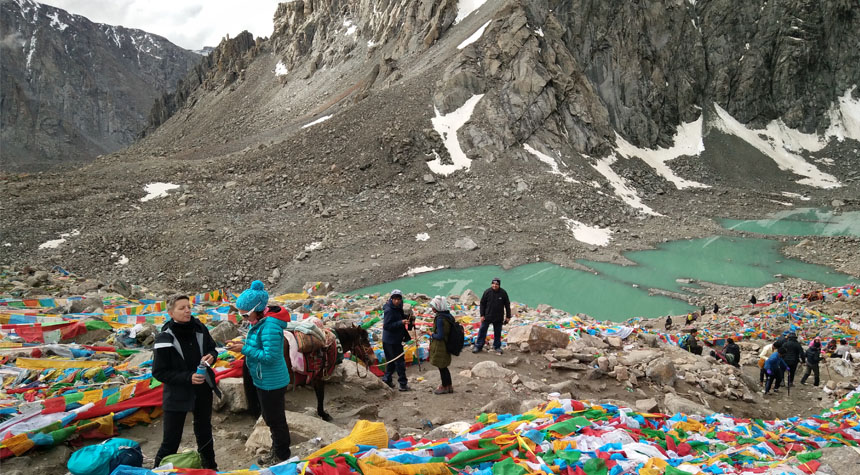 Just below the crest of the pass, on the way down towards Dzultripuk Monastery, lies the high Kadoe Lake, where legend says Parvati, the wife of Lord Shiva, bathes. The lake lies at an altitude of 5,568 meters, which technically makes it the highest actual lake in China. The lake is variably known also as Gauri Kund and Tuoji Lake.

The hike follows the lush green valley of the Lham-Chhu River all the way down to the monastery, passing by a number of Mani walls on the route.

Dzultripuk Monastery Guesthouse may be old, but the rooms are clean and dry and relatively comfortable in comparison with other monastery accommodation. Rooms have either four or eight beds, with outdoor squat toilets and freely available hot water. There is no electricity or Wi-Fi, and no bathrooms for showers.

Once again, the monastery guesthouse does sell some packet and instant foods, mostly noodles, which you can just add hot water to, which is available in the guesthouse.

The last day of the trek is the easiest and shortest, and lasts for around 3-4 hours of trekking. The trek to Zongto is around 7 kilometers, and you can get the eco-bus there to take you back to Darchen and a warm shower. 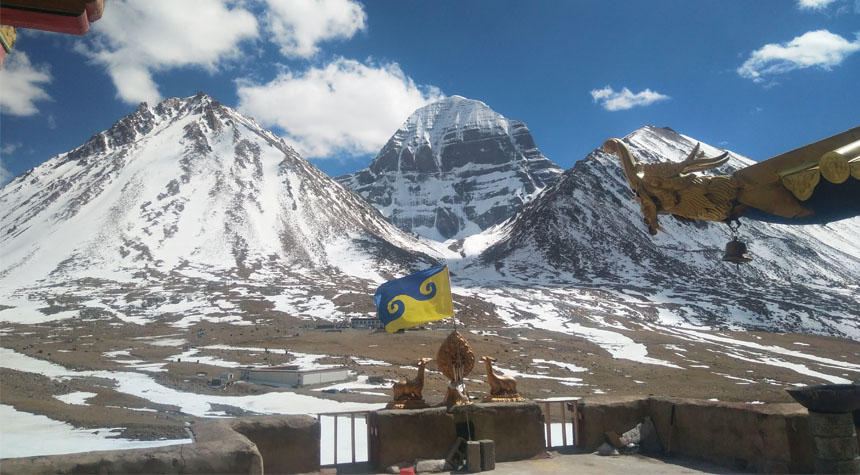 The route along the trek passes even more Mani walls as you descend the valley, and as you enter the narrow canyon, you should look for the holes in the walls. These are made by pilgrims digging for holy stones in the canyon walls.

At the end of the canyon, the valley widens out again, and you get an amazing view out over the Barkha Plain to Lakes Manasarovar and Rakshastal.

You have a choice of accommodation in Darchen to suit most tastes, including guesthouses and hotels, most of which have Wi-Fi and hot running water. Power is also available throughout the day in some, and rooms are generally clean and comfortable. Toilets are also of the western type, as most of these hotels cater to tourists, rather than local pilgrims.

In Darchen, you do have a range of places to eat at, which serve all kinds of foods from typical Tibetan teahouse snacks to Salar Muslim or Sichuan cuisines. You can choose from such awesome (after the food of the trek) restaurants as the Chongqing Canteen, the Chuanxiangyuan Restaurant, the Qinghai Salar Noodle Shop, the Heruitang Fandian restaurant, and the Markam Teahouse. You can also find food in some of the hotels in the village.

Warm Tips on Hotel and Food in Kailash Trekking

A sleeping bag is a necessity on the long Kailash Kora trek, and you will be very glad of it by the end of the first night. While the beds are comfortable enough (if you are lucky enough to find room in the monastery guesthouses), the bedding is often only changed very infrequently, and you will need the sleeping bag, as you do not know who else used the bedding before you. It is often dirty too, so best to stay off it. The sleeping bag will also keep you warmer in the cooler nights.

Toilets are only found in the teahouses and guesthouses around the kora route, and are basic squat-style toilets, often little more than a hole in the ground with some walls around it. It is essential that you bring enough toilet tissue and wet wipes, as there are none available in the toilets themselves. And with limited washing facilities, the wet wipes are a godsend.

While you can survive on the snack noodles and packet or dried foods on the trek, you will be expending a lot of energy along the trail as you hike each day. It is a good idea to have some food supplements, such as vitamins and minerals, to help sustain your needs. It is also useful to bring snacks like chocolate, cookies and biscuits, nuts and dried fruits, and other high-energy snacks to give you a fast energy boost along the trail as you need it.

The trek around Kailash Mountain is a hard one, and is made harder by the most basic of services in terms of accommodations and food availability. Guesthouses have basic dormitory accommodation, with no heating and electric, and definitely no Wi-Fi. Food is either basic Tibetan cuisine, which is not palatable for many, or packet and instant foods. These are the best options, though they are often rather expensive. Better to bring your own packet and dried foods with you, and just get hot water to cook it with. Overall, the trek is a little like a survival exercise, with guides and yaks to carry stuff for you. And a lot better views than you would ever have imagined.