Which Lhasa Monastery is Most Worth Visiting

Tibet is a land of mystery and mysticism, one of the last places on the planet where you can experience on of history’s most timeless religions and where you can visit the stunning monasteries that Buddhism has brought about. In this ancient and timeless land, Buddhism is the major religion, one which has become so intertwined with the Tibetan culture that it is almost impossible to tell one from the other. Every aspect of Tibetan life has some form of religious ritual to it, many of them forming part of the Tibetan’s devout religious belief and the journey towards enlightenment.

Lhasa is one of the world’s most stunning cities, and with all that it has to offer, you should give yourself plenty of time to explore its mysteries and wander the cobbled alleys and backstreets to discover its secrets. With its deep-seated roots in the Buddhist religion, any traveler to Lhasa will be amazed at the impressive palaces and ancient monasteries that the city has to offer. You can check the most recommended monasteries in Lhasa city as below and pick up your favorite ones for your Tibet tour.

The most visible landmark in all Lhasa city tours, which can be seen for miles around the outside of the city, Potala Palace lies on the small hill known as Moburi, over 100 meters above the city itself. The palace is actually the highest ancient palace in the world, and at its highest point, it reaches an altitude of 3,750 meters above sea level. The palace lies on the site of an ancient 7th century fortress and was constructed in its present form by the 5th Dalai lama in 1645.

Once the seat of Tibetan government, the palace has more than 1,000 rooms and covers an area on the top of the hill of around 32 acres. Its massive stone walls measure more than 3 meters thick at the base, tapering up to the higher ramparts, which are still more than a meter thick at the top of the structure. 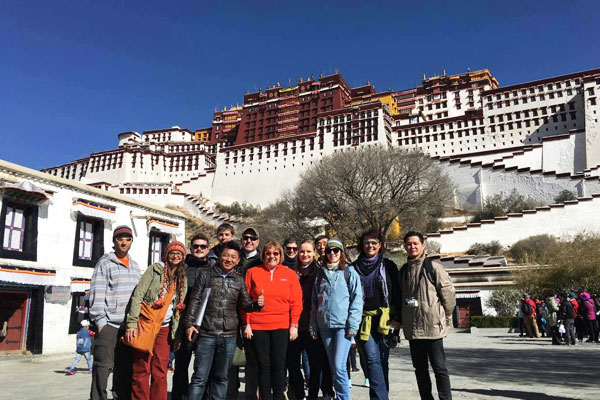 Taking photo in front of the Potala Palace

The palace has stood for more than 350 years as a testament to Tibetan architecture and is revered around the world as one of the most stunning buildings in Tibet. Built in two parts, the Red Palace and the White Palace, this monumental building is topped by a gilded roof that shines in the sun, reflecting the glory of the building itself.

The Red Palace is the main prayer house of the monks and the Dalai Lama and is dedicated to the study of Buddhism in Tibet. Containing more than 20 chapels, the Red Palace also contains the mausoleums of the previous Dalai Lamas, each built to honor the dead incarnation of the living Buddha. However, the mausoleum of the 5th Dalai Lama dwarfs them all, standing five stories high and covered in gold, pearls, and rare diamonds.

The White Palace was the part of the Potala that once housed the offices of the government of Tibet during the time of its theological rule by the Dalai Lama and was home to ten successive incarnations of the Dalai Lama as his personal apartments. Constructed by the fifth Dalai Lama, a part of the ancient fortress built by the Tibetan king, Songtsen Gampo, still remains I the west of the White Palace.

Inside the Potala Palace you can find some of the most ancient and sacred artifacts in Tibetan history, as well as many Buddhist artifacts that are literally priceless. Antiques and murals that date back more than a thousand years to the beginnings of Buddhism in Tibet and amazing works of Tibetan art grace every room and hallway. Many of the murals tell the stories of the people of Tibet and its history, as well as the story of the Dalai Lama in each of his incarnations with one massive wall fresco telling of the life of the fifth Dalai Lama and his amazing works in Tibet.

If you are planning a visit to Tibet and the Potala Palace, then summer is often the best time to do so, despite the huge crowds of people that the peak season brings. The view of the Potala Palace from the Potala Square at the foot of the hill is best with the bright sun shining in a clear blue summer sky, and the lamplit view of the palace on the cool summer evenings is unbeatable.

Jokhang Temple in Lhasa, whose name means “House of Buddha”, is the spiritual center is Tibetan Buddhism and the oldest temple of its kind in Tibet. The primary seat of the Gelug School of Tibetan Buddhism, it was originally constructed in 647 AD to house the statues of Buddha that were brought to Tibet by the wives of Songtsen Gampo. The temple lies in the middle of Lhasa, on the site of what was once a small lake in the city that was filled in to counter the evil demons that resided within.

The most sacred temple in Tibet, the Jokhang is the terminus of thousands of pilgrims that travel the length and breadth of the plateau every year to prostrate themselves in prayer at its gates. Every day, in the courtyard in front of he gates of the temple, many pilgrims and local Tibetans can be seen performing the five-point prostration, a form of prayer in Buddhism that is deemed to be the ultimate in worship rituals. 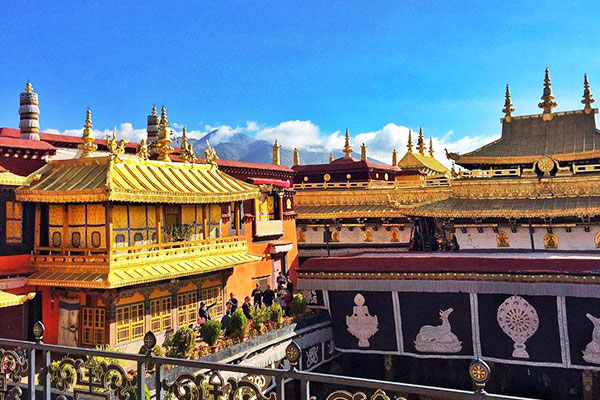 Jokhang Temple is most sacred temple in Tibet.

The temple is not solely Tibetan in its design, with aspects of Tang Dynasty Chinese architecture in its construction, as well as Nepali and Indian influences from the many and varied craftsmen that aided in its design and construction. Covered with golden roofs that are crafted with a multitude of birds and beasts, bells, and other ornaments, the roof area offers one of the best views of the Potala Palace in Lhasa, looking across the city to the hill in the east.

The central hall of the temple is where the life-sized statue of the Sakyamuni Buddha resides, which was brought to Tibet by the Tang Dynasty Princess Wencheng on the occasion of her marriage to the Tibetan king. This stunning gilded statue of a 12-year-old Buddha sits in the most elaborate setting, covered with clothes and robes adorned with gems and jewels and fringed with gold brocade. For centuries, it has been the object of prostration by pilgrims from all across Tibet, and even other places around the world.

The monastery has a huge number of statues of Buddha and other saints and deities, and the many halls contain some of the world’s oldest and most spectacular murals that depict the history of Tibet from its early Buddhist beginnings. 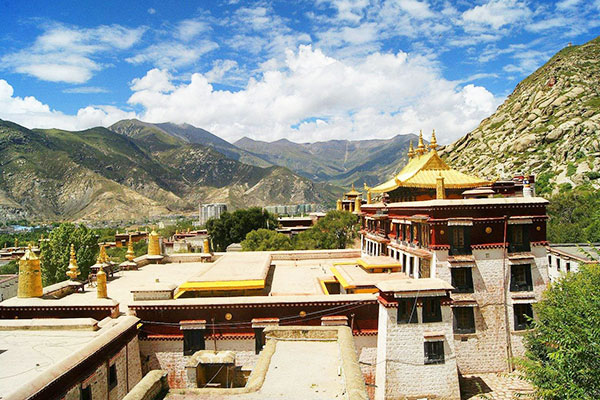 Sera Monastery is one of the largest monasteries in Lhasa

However, the main attraction for the tourists to Sera Monastery is the unique debates of the monks that happens every afternoon in the debating courtyard. The debates are centered around the Buddhist doctrines, and the monks debate the theological and theosophical aspects of the scriptures as a means to learn more of the doctrines and gain a better understanding of their meanings.

The debates are lively and articulate with many gestures, including the clapping of hands and stamping of the feet. The debates are open for onlookers to see, and the debating courtyard is a delightful gravel courtyard dotted with ancient elms and birch trees to provide shade from the afternoon sun. Visitors are advised to remain silent, however, so that they do not disturb the monks in their debates.

A collection of grand white buildings, the monastery stands out starkly against the dark backdrop of the surrounding mountains. One of the most prized relics of Tibetan Buddhism is housed in the Great Sutra Chanting Hall of the Drepung Monastery. According to the local records, when the monastery was constructed, a magical conch shell was discovered by the founder, Tsongkhapa, which is believed to have been buried there by Buddha himself. Visitors are allowed into the halls, but only during the morning, as they are closed for prayers in the afternoons. 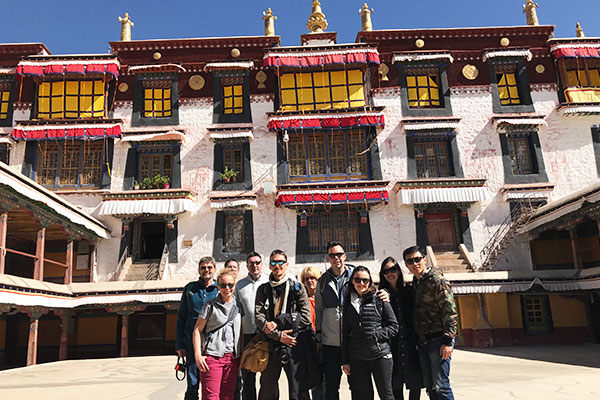 Drepung is the first of the Great Three monasteries of the Gelugpa School of Tibetan Buddhism.

The most significant event at the Drepung Monastery is the spectacular Shoton Festival, which is held every year in August. One of the most important festivals in the Tibetan Buddhist calendar, the Shoton festival celebrates the end of the 100 days of fasting of the Tibetan Buddhist monks, and is the time when the huge Thangka painting is unfurled on the hillside behind the monastery.

A popular festival for the Tibetan people, thousands gather from before sunrise to await the unveiling of the thangka, gathering in front of the stairs that lead up to the thangka platform. The thangka is around 20 meters wide and 30 meters high, and once it is unfurled the thousands of onlookers pray in front of it and throw hada on the thangka as a ritual sacrifice.

During the period while the thangka is laid out on the hillside, thousands of Tibetans make a ritual circumambulation of the painting, praying and chanting as they walk around it in a long line. The Thangka unveiling attracts visitors from all across Tibet, as well as from around the world to come and see this amazing spectacle.

Located on the southern bank of the Lhasa River, around 60 kilometers from the center of Lhasa, Ganden Monastery is one of the earliest Buddhist monasteries in Tibet. One of the largest monasteries in Tibet, it was built in the 15th century by the founder of the Gelugpa School of Tibetan Buddhism, Tsongkhapa. As the highest-ranking monastery in the Gelug School, its abbots are also the abbots of the entire school of Tibetan Buddhism and outranked only by the Dalai Lama and the Panchen Lama. 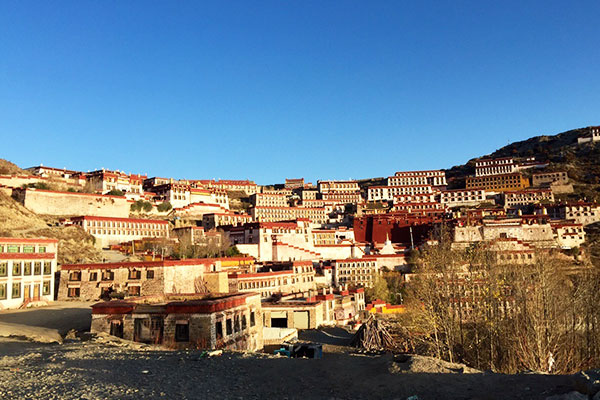 Ganden Monastery is the highest-ranking monastery in the Gelug School

The monastery is made up of more than 50 structures and the main halls and Main Assembly Hall are found in the main temple structure. The monastery has four main halls, the Coqen Hall, the Sutra Hall, the Buddha Halls, and the Holy Stupa Hall, as well as many other rooms. The main buildings also house the famous Tri Thok Khang, the bed-chamber of Tsongkhapa and the abbots that followed. The hall houses statues of the Sitatapatra and Manjushri Bodhisattva and the windows are made of ornately carved wood in the style of the Central Plains of Tibet.

The monastery also contains two colleges of tantric Buddhism, known as Zhacangs, which are capable of holding more than 1,500 student monks within their halls and dormitories. With nine debating courtyards, 95 holy stupas, and thousands of preserved relics, including the jewel-studded armor of the Qing Dynasty, a visit to Drepung Monastery really needs a full day to see it all properly.

0 Comment ON "Which Lhasa Monastery is Most Worth Visiting"