Top Things to Do During Your Lhasa City Tour

Lhasa city is the administrative capital of the beautiful Tibet region of the Peoples Republic of China. It translates to the Land of Gods and is an over 1,300-year-old city with many attractions for travelers. The city is 3650 meters above sea level based on the northern slopes of the famous Himalayas.

The city of Lhasa is accessible by plane, bus, and even train. When in the city you will experience a unique and exciting culture that remained for thousand years. What are the most important things to do and see during your Lhasa city tour? How to plan your days in Lhasa since it is the first stop of your Tibet tour? Here are the highly recommended things to do that rated by thousands of customers who visited Lhasa city. You can get some ideas while arranging your days in Lhasa.

The Patola Palace is a white palace, 13 stories in height covered in snow. It is a must-see World Heritage Site based in Lhasa. This historic building was once the residence of the spiritual Dalai Lama until the 14th Dalai Lama which was till 1959. The Potala Palace is covered with Tibetan history, art and is a worshiping place which is unique. Seeing it with your own eyes is a magical feeling with a sense of peace and tranquility. A fully explained history of the palace will be described by the tour guide, with an interesting story of how the palace came to be. 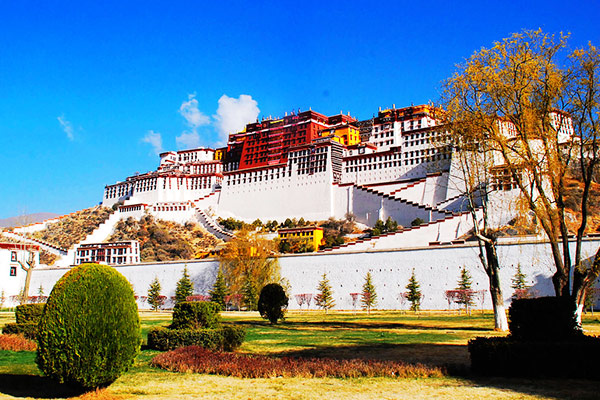 The palace is in two parts, the Red Palace and the White Palace which tells a story of Tibet. The Red Palace contains the main ceremonial hall with the throne of the Dalai Lama. It also has various rooms such as the private monastery of the Dalai Lama along with objects of gold and silver beaming into your eyes. Overlook the city from the Golden Roof Group which is on top of the Red Palace. The White Palace is filled with the offices of the Tibetan government and Governmental assembly halls.

Don’t forget to experience the spiritual Kora, which is a prayer around the palace. It ranks amongst the top things to do in Lhasa.

Lhasa is known for being an ancient Buddhist city where you can join in the Buddhist path of righteous and pilgrimage. Visiting the Tibetan monasteries will highlight your stay in Lhasa, with its traditional architecture and a culture which is refreshing. 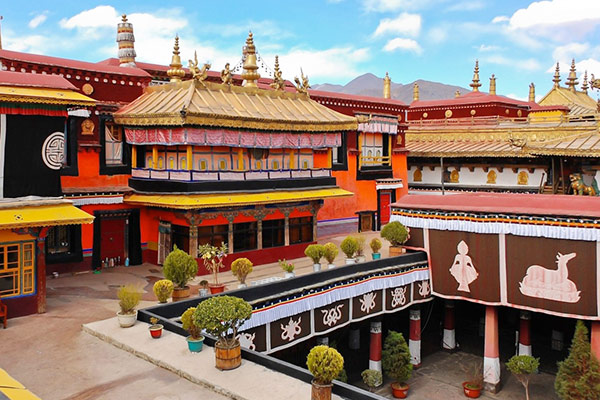 Jokhang Temple is the most sacred temple with Buddhist pilgrims from all over the world visiting throughout the year. It is located in the busy Barkhor Street which is in the heart of the city. It has a history of 1,360 years built by Songam Gambu the King of Tibet. The temple is known for the Jowo Buddha. Your wishes are said to be fulfilled in partaking of prostrating in the temple or going around the temple.

Besides the Jokhang Temple in the center of Lhasa city, you will not miss the chance to travel towards the great three Gelug university monasteries of Tibet. The first one is Sera Monastery, which is at Tatipu Hill on the northern side of Lhasa. It is a magnificent monastery which is 28 acres in area. If you are fond of watching monks’ debates, do go over to the section of monks debating at 3 PM which happens every day.

The second of the great three is the Drepung Monastery which is situated at the Mountain Gambo Utse in the Western suburb of Lhasa. It is very grand and is the largest Tibetan Buddhist Galug temple concerning size and historical status. It’s known to have had over 10,000 monks before Liberation. From this Monastery, you can view the whole Lhasa City which is beautiful. 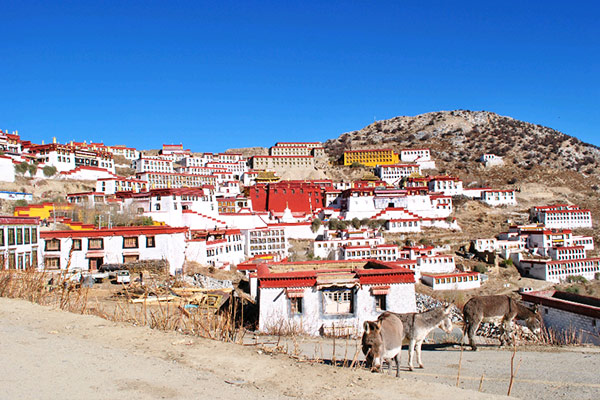 The last but certainly not the least of the Great three monasteries in Tibet is Ganden Monastery. It is situated on Wingbur Mountain on the southern bank of Lhasa River. It is on top of the Mountain at the height of 3,800 meters above sea level which makes the views spectacular. This Monastery is famous for the Buddha Painting Unfolding Festival which attracts thousands of pilgrims and visitors alike. When you visit the Ganden Monastery, you can also enjoy a popular trekking tour from Ganden to Samye.

Relish the Buddhist tradition in Lhasa by burning incense sticks and offering khata scarves which is a traditional ceremonial scarf. It is a blessing that will last you a life time!

The Tibetans are rich in culture, with a fascinating Tibetan language and beautiful architecture. You will even notice some of the local men and women wearing long sleeves even in the hot summer. Take a visit to a traditional Tibetan house in Lhasa and experience life in a simple yet enjoyable way. 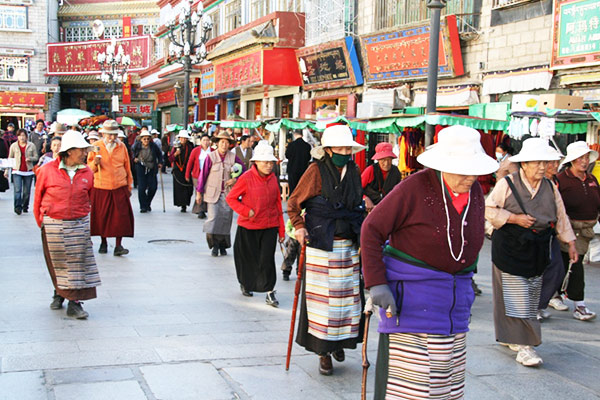 Barkhor Street is the most prominent shopping bazaar in Tibet. It is an excellent place to experience the rush of the locals while shopping for exotic souvenirs. You might get lost in the market, but don’t panic as the experience felt here will be the warmest ever.

Do drink the buttered tea, and quench your taste buds to the warm feeling the tea gives, which is perfect for the high altitude of Lhasa. Do not miss the Momos which are the Tibetan version of dumplings and the Thukpa which is a noodle soup filled with mutton or yak for the meat lovers.

Tea in Tibet is made sweet and is best had in Tea houses. The local Tibetan Tea Houses are the best hangout spots to take a break and enjoy the relaxed lifestyle. The Tibetans love playing Xiu, a traditional Tibetan dicing game which is full of enthusiasm when played. The Cangsui Sweet Tea House is small in size but has an aroma which will catch your attention. Sip on some sweet tea while eating local cuisine here. Other favorite Tea Houses are the Guang Ming Sweet Tea House and Shan Dong Sweet Tea House which is near the famous Patola Palace.

For a city like Lhasa which is slow paced, you will never figure that its nightlife is that of fun and memories. You can spread your nights out in Lhasa to enjoy the night view of Patola Palace, taking a visit to the night market and drinking your way to happiness in a decent bar. The Potala Palace stands out in the night time. Capture the fantastic postcard view from the square palace, and show it off to friends back home. 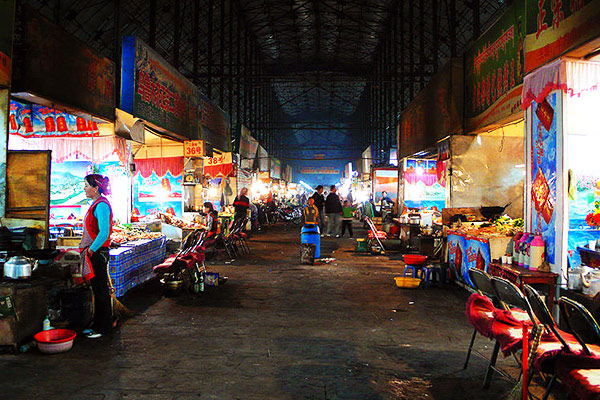 There’s nothing like snacking away to glory in the famous night market in Lhasa called Tianhai Night Market. This is situated in the western part of the city, which is crowded and filled with lights. Munch on the different snacks while browsing through the beautiful handicraft.

Barkhor Street is the place to be for fun-filled nights of drinks and friends. There is the Mayke Ame which is a fantastic place to fill your tummy up with good drinks and food. Drink up with the locals here and here amazing stories which will keep you laughing and entertained throughout the night. There is also the Ganglamedo Café and Bar with you can munch on the Western food you are missing out on while drinking your favourite spirits.

Surrounding the capital city of Lhasa are attractions which are worth traveling. The beauty and serenity are like heaven. Between Damxung County of Lhasa and Bango County of Nagqu region, is the second largest saltwater lake in China called Namtso Lake. It translates to Heavenly Lake which is appreciated mostly in late April when the lake becomes turquoise in color because of ice melting. The weather here keeps changing, and so when you travel don’t forget to bring both your thick clothing and your sunscreens too. Try to stay overnight in this fantastic location, as the sunrise and sunset are breathtaking. 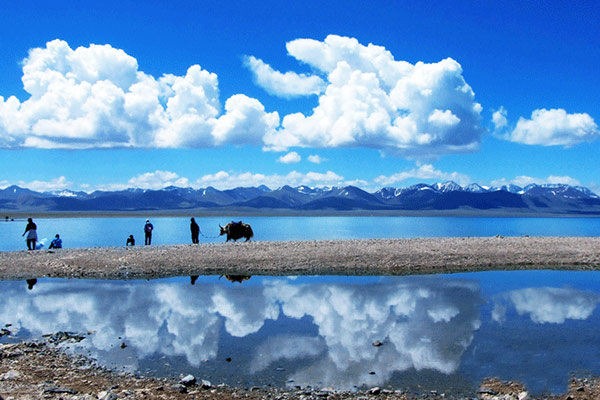 90 Km northwest of Lhasa is Yangpachen Hot spring. It is famous for its geothermal scenery which has hot water at 70 degree Celsius boiling temperature amid thick fog. Do visit the Holy Medical Spring Resort here, to dive into the hot springs which can cure diseases and strengthen the body. It is the only place in the world where you can enjoy a warm water swim at 4,200 meters above sea levels with the excitement of the grand snow mountains.

Overall, Lhasa city is a place to be treasured, and you are bound to return for the everlasting memories to be relived. Enjoy the sites of monasteries, the views of mountains and the culture of the Tibetans when in Lhasa.