In September, Lhasa, Tibet, welcomes good weather for outdoor activities. Tourist crowds dwindle as the high season passes, and travel expenses start to drop. So, if you enjoy sightseeing and exploring the countryside, September is the ideal time for you to visit Lhasa and Tibetan Plateau.

Average Weather in Lhasa During September

In September, Lhasa receives lower precipitation than in August and benefits from clearer skies. Temperatures of air are insignificantly lower, as well as humidity, compared to the last month of summer. Still, the UV index remains at its peak, and you will need to protect yourself from the sun during your trip to the Tibetan capital.

In the first month of autumn, air temperatures remain near average annual highs, but they slowly start to decrease. The beginning of this period features summer temperatures. However, these are usually lower for a few degrees Celsius (several Fahrenheit) by the end of September. 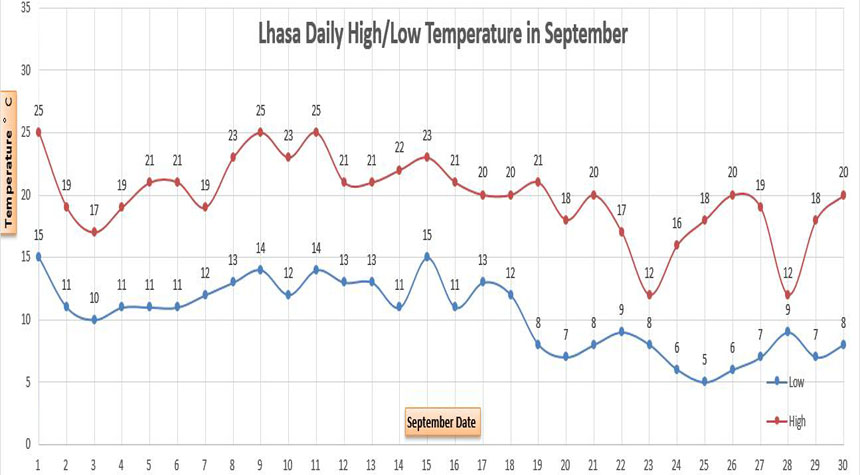 Average highs typically remain around 20°C/68°F, a bit more or less, most of the time. However, these tend to plummet below 15°C/59°F by the end of September.

Therefore, you should be ready for cold weather when visiting the highest capital in the world this time of year.

As days pass, the time window featuring comfortable temperatures gets shorter. At the beginning of the first autumn month, it usually lasts from noon to 8 pm. By the end, it is virtually gone, with prevailing cool daytime and cold nighttime temperatures.

Is Lhasa Wet in September?

September marks the end of the rainy season in the City of Sunshine. Compared to August, the transitional month from the wet to dry season features half the amount of rainfall. 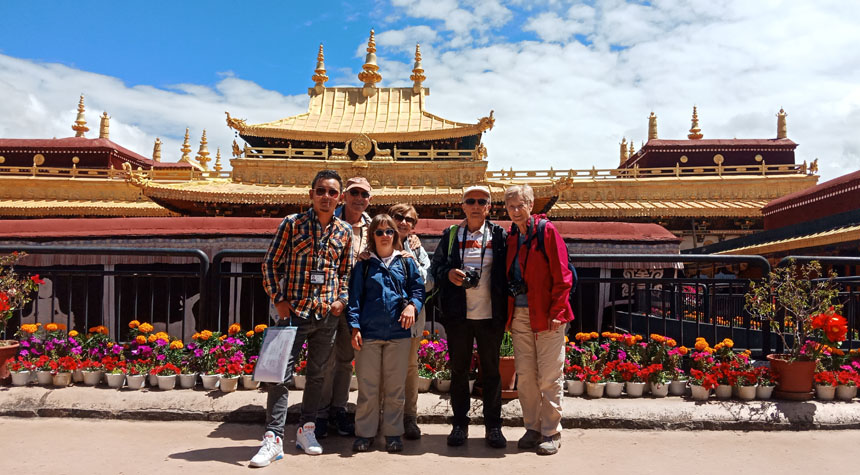 In accordance, the weather becomes less cloudy over time. For example, Lhasa is 60% likely to have overcast or mostly cloudy weather on Sep 1. On Sep 10, this probability is 50%. Finally, the city has around 25% of the chances to have cloud cover on the last day of the month.

As the skies get clear, the average number of sunny hours increases from seven in August to eight in September.

Things to Wear in Lhasa and Tibet This Month

Your packing list for September should contain both light and warm cloth, especially by the end of the month. Additionally, you should bring a raincoat, sunscreen, sunglasses, and lip balm for protection from rain and sun.

If you travel to Lhasa in the first half of the month, you will feel comfortable in minimalist clothing most of the time. So, you should pack thin trousers, short-sleeved shirts and T-shirts, shorts, and a light jacket for cool evenings. Also, prepare sneakers or light shoes to wear in cities and hiking boots for the countryside.

Travelers going to the Roof of the World later during the month should add a down jacket, hat, thicker cotton trousers, and an overcoat. Given that you visit high-altitude places, such as Mount Everest and Mount Kailash, prepare for winter conditions.

The transition from summer to autumn is a great time to visit the City of Sunshine and the Land of Snows. As the rainy season ends and the dry begins, you will enjoy pleasant temperatures, fewer tourists, and beautiful nature.

Tibetan Plateau brims with vibrant flowers and plants this time of year. Green still lingers in the countryside, while warm autumn colors slowly become dominant. Since the skies become clear of clouds, you will be able to observe high mountain peaks and other imposing features.

Prices and Availability of Tourist Facilities and Guided Tours

Since the number of holidaymakers dwindles, it becomes easier to book a Tibet train or flight to Lhasa. Moreover, the costs associated with traveling start to drop, including the price of transport, guided tours, and hotel rooms. For a Small-Group Lhasa Tour, for example, you will pay approximately 15% less in September than in August. 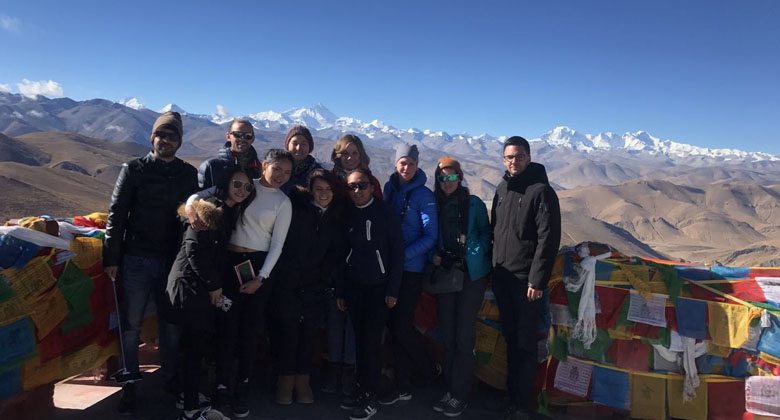 Join in our Tibet small group tour to enjoy the Himalayas at Gawula Mountain Pass.

You will also achieve savings by booking other guided tours in September. A trip to Mount Everest, Tibet-Nepal Overland Tour, and other tours allow you to save up to 10% of the August price, if not more.

This time of year, reserving tickets for Tibet trains traveling from major Chinese cities to Lhasa shouldn't present a problem. However, you might wish to consider making upfront reservations to secure a desired type of sleeper. Trains have Hard and Soft sleepers, with each featuring certain benefits.

Hard Sleeper is about 2/3 of the price of Soft Sleeper. However, the latter provides more benefits, such as better privacy, larger berths, and fewer beds in the compartment. Also, Soft Sleepers are quieter and have a lock on the door.

Lhasa is the top culinary destination in the Chinese Autonomous Region of Tibet. The world's highest capital prides on first-class eateries serving local food. More so, you can find restaurants preparing international specialties, including western, Nepali, and Indian. 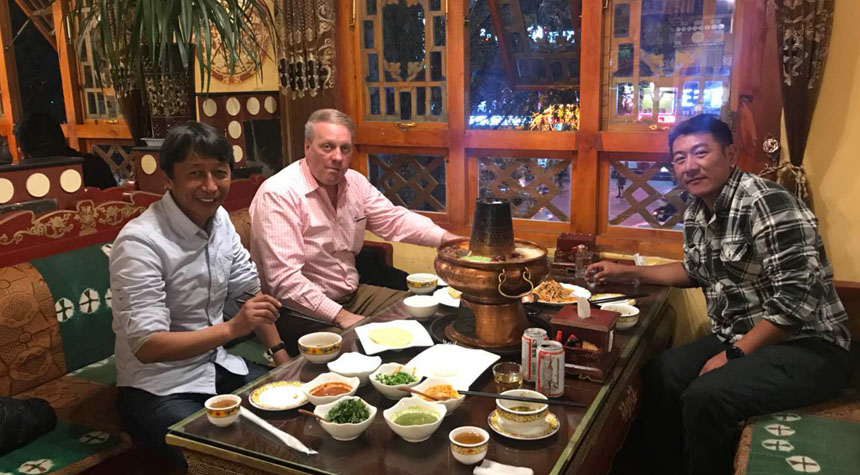 Tibetan food is likely different from anything you have eaten before your trip to the Land of Snows. Because of the specific climate influenced by high elevation, the local diet is predominantly based on high-altitude barley and yak meat and dairy products.

So, you may need to accustom yourself to the local gastronomy before traveling further in the Roof of the World. Elsewhere, finding a restaurant serving international food becomes a challenge. That applies even for Shigatse, the second-largest city in Tibetan Plateau.

Another thing to keep in mind is that some restaurants close for the off-season, which kicks off in November. Therefore, coming to the City of Sunshine in early autumn allows you greater freedom in choosing where to eat.

With autumn and dry season approaching, Tibetan nature is at its best. Sacred lakes of Tibet, such as Namtso and Yamdrok, are full of water, while landscapes countrywide feature combinations of different colors. Trips to Yamdrok and Namtso, which are up to several hours by car away from Lhasa, are the highlights of early autumn. 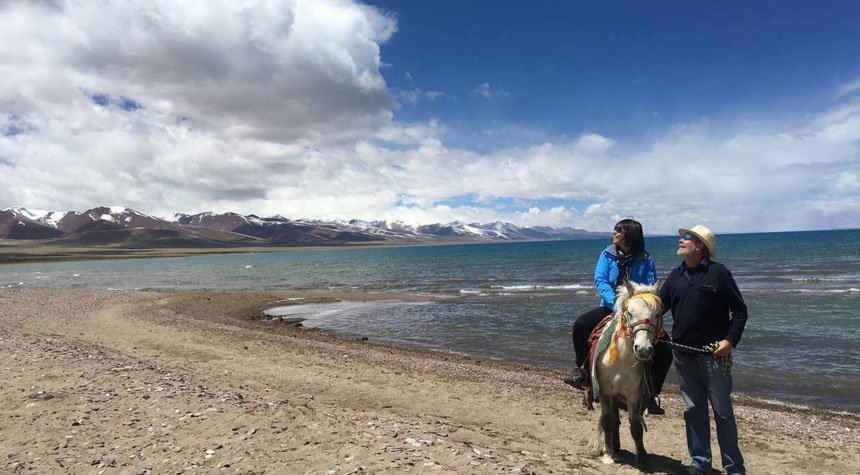 Namtso Lake is one of the must-see attractions during your Lhasa tour.

The waters of Namtso are deep blue, reflecting an occasional cloud on their surface. Moreover, the nearby pastures are green, and you will be able to see herds of yaks around the lake. Around Yamdrok, you will see various birds, migratory included, that reside in the area during winter.

The countryside around the capital of Tibet is quite picturesque. Take a hike or trek to discover colorful fields and forests and visit a few historic monasteries. Also, explore the flow of the Lhasa River and socialize with Tibetans that fish there.

Useful Tips for Traveling Outside Lhasa

North Everest Base Camp and Rongbuk Monastery are the nearest places to Mount Everest in Tibet. They have simple accommodation and are near vantage points offering excellent views of the Himalayan summit. Because of the cloudless sky, observing the world's highest mountain around Everest Base Camp is as good as granted in September.

After taking postcard-quality photos of Mount Everest, you may proceed to Nepal and its capital city. Road conditions of the Friendship Highway are good throughout the year, and the first month of autumn isn't an exception. While traveling through Tibet is mostly smooth and relaxing, the Nepali section features gravel and dirt roads and sharp turns, which prolong travel times. 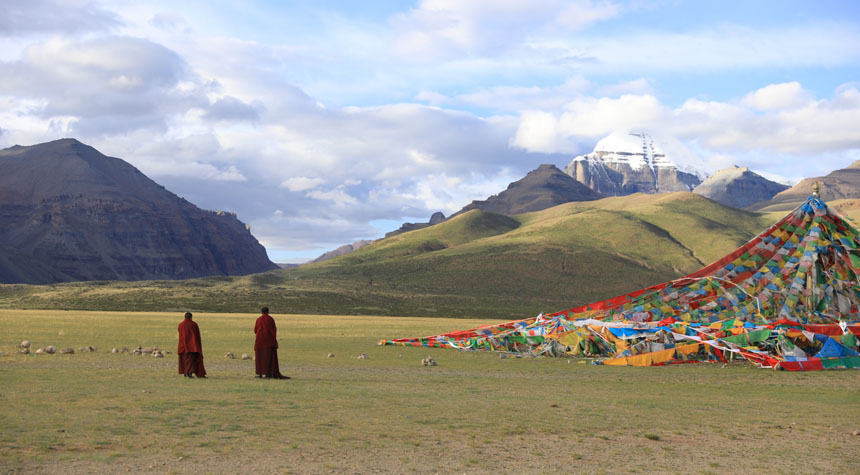 Mount Kailash is also a great place to visit in Tibet in September.

Mount Kailash is a focal point of pilgrimages and treks in September. The weather conditions around the mountain, however, are less favorable than in other regions of Tibetan Plateau. Furthermore, the mountain stands about 6,640 meters (21,780 feet) above sea level, featuring low oxygen.

Physically well-prepared travelers accustomed to high altitudes manage to cover the 52km/32mi distance in three days. So, if you are a hard-core trekker, hit the road from Lhasa to Mount Kailash only in the later stages of your Tibet trip.

With weather conditions improving and tourist crowds dwindling, September is one of the best months for a trip to Lhasa and Tibet. Regarding the weather, there are virtually no limitations for going anywhere in the autonomous region.

Still, taking a trip to the world's highest capital and region involves a lot of planning. Therefore, you should contact proven travel experts of China Tibet Train Tours. Besides acquiring necessary documents on your behalf, our employees can help you plan and schedule everything down to the smallest detail.

Most Recommended Tibet Tour in September