Lhasa weather in October has two different faces. The first half of the month features warm temperatures, while the second part is rather cool. Furthermore, many visitors come to Lhasa early in October, while the number of travelers is low during the rest of autumn.

The average air temperatures are lower in October than in September, minimum temperatures, in particular. Furthermore, the amount of rainfall recedes as the dry season proceeds, reducing the precipitation to insignificant quantities. Consequently, the relative humidity is decreasing.

The daylight is shorter this month, but the capital of Tibet has nine hours of sunlight per day, on average. Compared to the previous month, this is an hour more.

As the temperature graph indicates, highs and lows are on the constant decrease during October in Lhasa. Sudden deviations from this trend do happen on occasion.

The first part of the month features alternating cold, fresh, and comfortable temperatures. The second part of October is mostly cold. 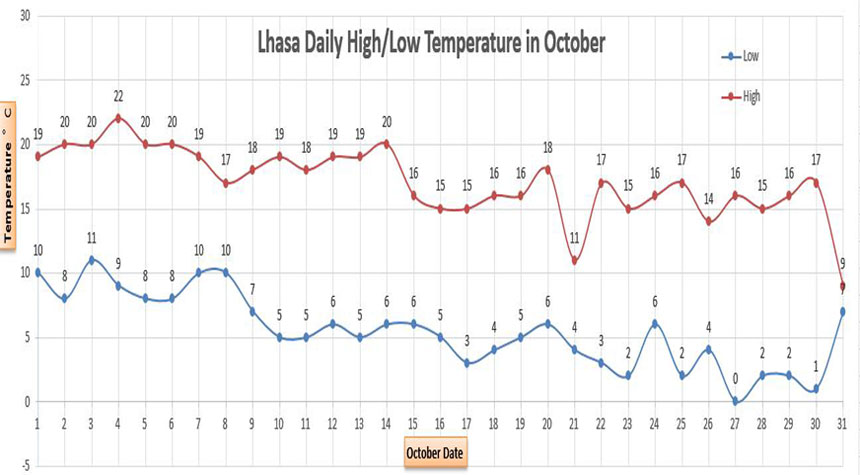 At the beginning of the first month of the dry season, average lows are still well above the freezing point, around 10°C/50°F. These drop as the days go by, being only a few degrees above 0°C/32°F by the end of the interval.

Most of the time, it feels cool or comfortable during afternoon hours in the world's highest capital. Mornings and evenings are typically cold, while night temperatures tend to approach the freezing point.

What Is the Air Like in Lhasa During October?

With the rainy season ended in September, the air becomes dry during the mid-autumn month. Because air temperatures decrease, that is a good thing, especially for cold-sensitive people. When humidity is high, people tend to feel colder than it is. So, you won't have to deal with such an inconvenience when visiting Tibet in October.

Vegetation, however, becomes scarce, which leads to lower levels of oxygen in the air. Moreover, Lhasa and most of Tibetan Plateau lie at altitudes where the air contains less oxygen by default. So, you will need a little more time to adapt to the thinner air when you arrive in autumn than in late spring or summer.

What to Wear in Lhasa This Month?

A combination of light and warm clothing would serve you best in Lhasa and the Roof of the World in October. Since days tend to be comfortable and nights cold, you should dress in layers to address temperature changes efficiently. Also, pack sunscreen, a wide-brimmed hat, lip balm, and sunglasses for protection from intense sunlight. 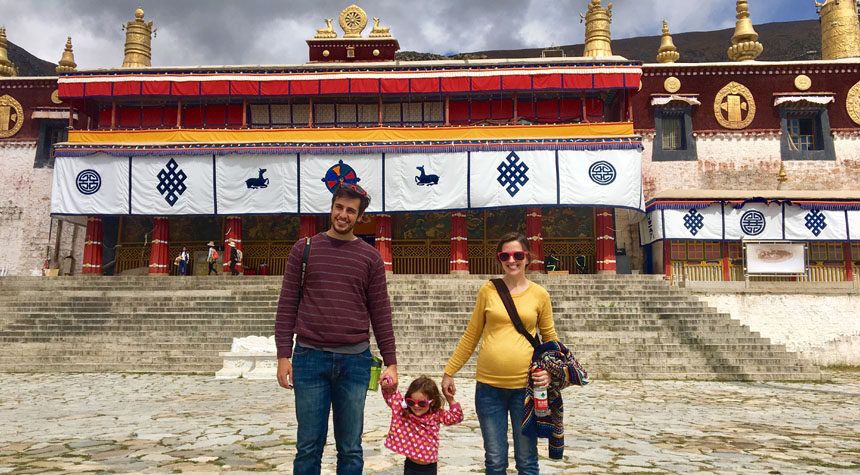 Your packing list essentials for a trip to Lhasa in October are a down jacket, light jacket, shirts, T-shirts, breathable trousers, pullovers, and tuxedoes. You should also include sweaters and down coats, especially if you plan to visit other places in Tibet. Mount Everest and Mount Kailash are among those where you will need winter outfit.

Albeit autumn is a shoulder tourist season in Tibet, early October reminds of the high season because of the National Day holiday. The celebration lasts around a week and draws many travelers from China and abroad.

Consequently, transport fares (flights in particular) and accommodation deals in Lhasa are high during this period. In addition, finding a hotel room or transport option is more difficult.

Most vacationers travel from metropolises of China to the City of Sunshine by Tibet train. Therefore, you should book your ticket well in advance if you plan your trip to Tibetan Plateau around the National Holiday. For a hassle-free booking procedure, contact China Tibet Train Tours, a renowned and expert travel agency specializing in Tibet trips.

Travel Benefits of a Trip to Tibetan Capital in October

As soon as the Chinese National Holiday ends, tourist crowds drop, as well as hotel and transport costs. Prices of guided tours also decrease, allowing you to make significant savings if you start your trip in the second part of October. 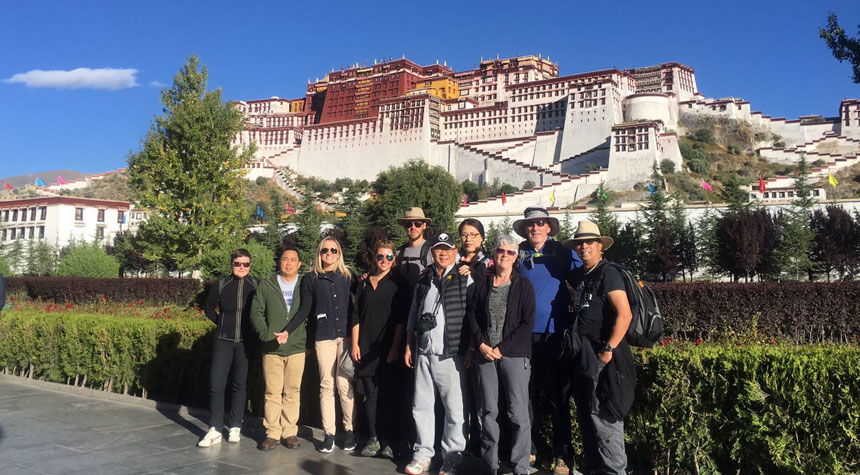 October is one of the high seasons for Tibet tour.

Besides more affordable deals, the second part of the mid-autumn month allows you to explore Lhasa at a relaxed pace. For example, only a limited number of travelers can visit Potala Palace, the ex-residence of Dalai Lamas, per day. And such a limit is much harder to reach during the shoulder than high season.

By visiting the Tibetan capital in late October, you get to know the authentic culture and the ways of the local people.

As soon as you set foot in Lhasa or any other part of Tibet, you will realize how friendly the Tibetans are. Racial, religious, and other differences don't matter to them, and they are welcoming toward guests, in general. You can relax and have a great time with the locals.

Still, you should know the local etiquette and taboos to avoid accidentally causing disrespect to someone:
● As almost every traveler does, you will press the button of your camera before knowing it while traveling Tibet. But, when you visit a temple, hold up a bit until you get permission to take photos.
● Barkhor Street in Lhasa is a one-way street. Therefore, walk in the same direction as everyone else does (clockwise) in this pedestrianized street. The same holds for visiting a place of worship.
● In Tibetan Buddhism, the head is a sacred part of the body. Thus, never cuddle a child's head in the Land of Snows.
● Although they didn't know you until recently, Tibetans may invite you to their home to socialize. Show them respect by buying drawing materials for children and holding an offered wine with both hands.
● When in the company of a local, sit with legs crossed.

In October, the weather is still ideal for exploring the countryside and admiring views of high mountains and blue lakes. Temperatures are somewhat lower than in the previous months, but rain is unlikely to catch you off-guard. Although Lhasa is mostly dry this time of year, late October, however, may bring snow to other parts of Tibet. 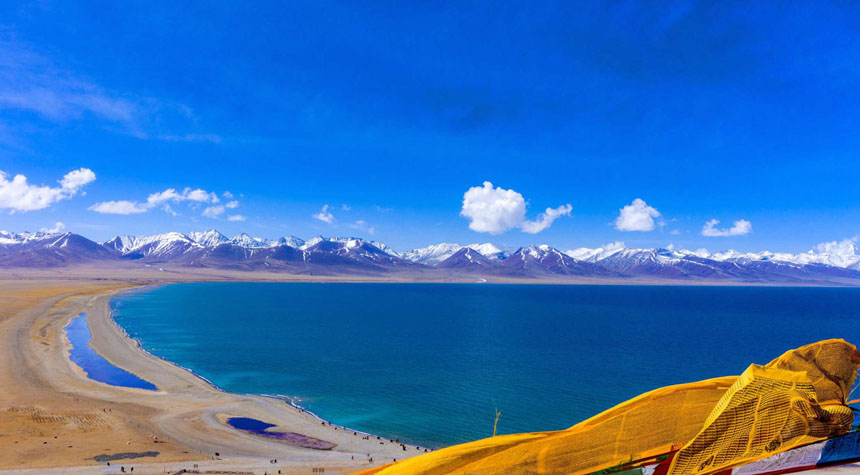 Namtso Lake, one of the three holy lakes in Tibet

So, plan to visit Namtso Lake before the end of the month since early snows might render the roads impassable. Yamdrok Lake is the most beautiful during this period. Accessible throughout the year, it features light blue waters reflecting a cloudless sky, contrasting against brown hills and occasional pastures.

Rongbuk, the world's highest monastery, is an excellent base for viewing Mount Everest. If you are a mountaineer or adventurer, you can try to climb the summit of the Himalayas in autumn. Whatever your preferences, make sure to be awake at sunrise and sunset to take photos of the mountain.

Please note that Rongbuk Monastery is open to travelers in October, while tent guesthouses may close around the middle of the month.

Tips on Traveling Outside Lhasa

Due to favorable weather conditions, undisputed observing of Mt Everest is highly probable in autumn and October in particular. Places that offer the most rewarding views of the Himalayan summit are Rongbuk Monastery and Tibetan Everest Base Camp (EBC). 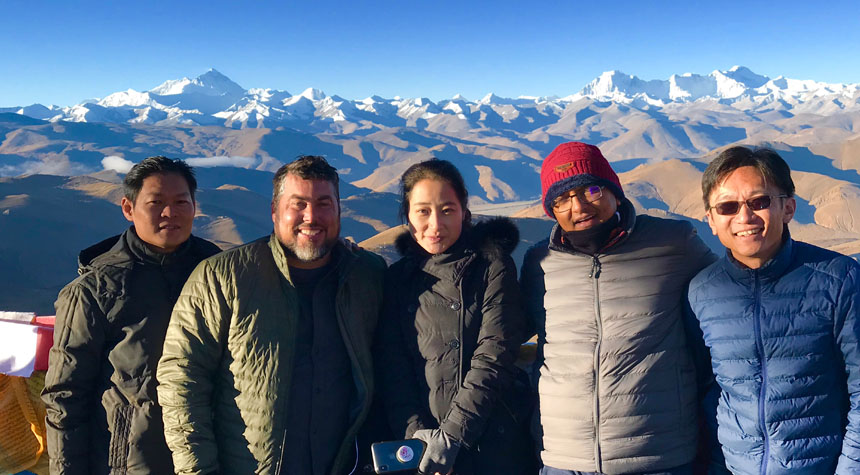 View of the Himalayas at the Gawu La Pass in October

From Gawula Pass, which is along the road from Old Tingri to EBC, you can admire a few peaks of the Himalayan mountain range. Besides Mount Everest, Cho Oyu, Makalu, and Lhotse define the skyline from there.

During autumn, road conditions of the Friendship Highway, connecting Kathmandu, in Nepal, and Lhasa are excellent. The Chinese section is usually dry and secured with safety barriers. Nepal, however, has unpaved roads lacking road barriers, for the most part, rendering driving between the border and the Nepali capital more adventurous.

You can still trek around Mount Kailash and Lake Manasarovar this time of year. The trekking route of the sacred mountain is about 50km/30mi long, featuring the average elevation of 5,000 meters/16,400 feet above sea level. So, adapt yourself well to the high altitude before you take this time-consuming tour.

Before the beginning of your trip to Lhasa and Tibet, though, you need to secure necessary travel documents and permits. China Visa is the first prerequisite you need to satisfy to proceed with your travel plans. Tibet Travel Permit (TTP) is the next you need to acquire.

While China Tibet Train Tours can help you with TTP and train tickets, you need to apply for China Visa on your own. Moreover, you may need to obtain further travel documents for trips outside Lhasa.

For these and other details regarding your trip, feel free to contact us. Our professional staff excels in creating perfect itineraries based on travelers' needs and habits.

Most Recommended Tibet Tour in October

0 Comment ON "Lhasa Weather in October: Tour Lhasa in October"