In April, Lhasa, the capital of Tibet, features the best of spring weather. Air temperatures are firmly above the freezing point, while rainfall is insignificant. Because of comparatively low costs and favorable weather conditions, Lhasa begins to receive more travelers in April than during winter months.

In April, average temperatures below 0°C/32°F are a matter of the past in Lhasa. Precipitation is insignificant, allowing travelers to enjoy hiking, trekking, and other outdoor activities.

An additional benefit for holidaymakers visiting the capital of Tibet is prolonged daylight. However, the UV index reaches its peak in April, calling for efficient and continual protection against sun rays.

Air temperatures increase at a steady pace throughout April in the highest capital in the world. Abrupt rises and falls are possible, but these typically don't last long. Lingering cold at night and in the morning may remind of winter, but days boast spring temperatures for the most part. 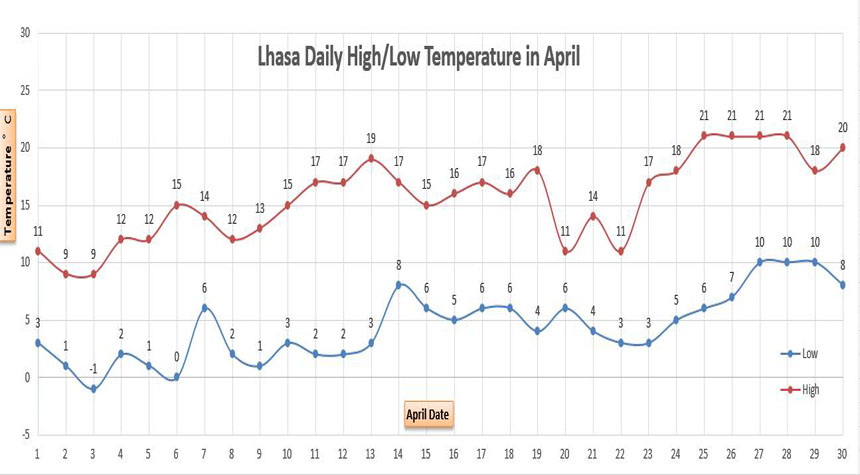 According to statistics, Lhasa features average low temperatures from 1°C/34°F to 3°C/37°F. These tend to fluctuate a few degrees Celsius (several Fahrenheit), but rarely more than that. Occasionally, these dip below the freezing point this time of year, but this is more an exception than a rule.

The air is very cold during night hours, after midnight and before 6 am, becoming less cold during the morning and evening. You are likely to experience cool, even comfortable, temperatures during the afternoon and early evening.

In the first half of April, air tends to be fresh a few hours around mid-afternoon (3 pm). By the end of the month, cool and pleasant temperatures are dominant from noon to early evening (8 pm).

The principal city of the Tibetan plateau receives low rainfall during April. Weather is mostly sunny, with around eight hours of sunlight per day on average. According to statistics, however, cloud cover tends to conceal the sun for a few hours.

Still, these clouds are highly unlikely to produce rain. Lhasa has one rainy day throughout the month, which produces negligible precipitation. Specific analyses determined that the likelihood of rain is just 1% on April 1, increasing to 5% on April 31.

Packing List for a Lhasa and Tibet Trip in April

Because of significant temperature fluctuations, your packing list should include layered winter and spring outfits. So, you need to pack a down jacket, woolen sweater, sturdy boots, thermal socks, thick trousers, and long underwear. Also, have gloves, hats, and scarves at hand. 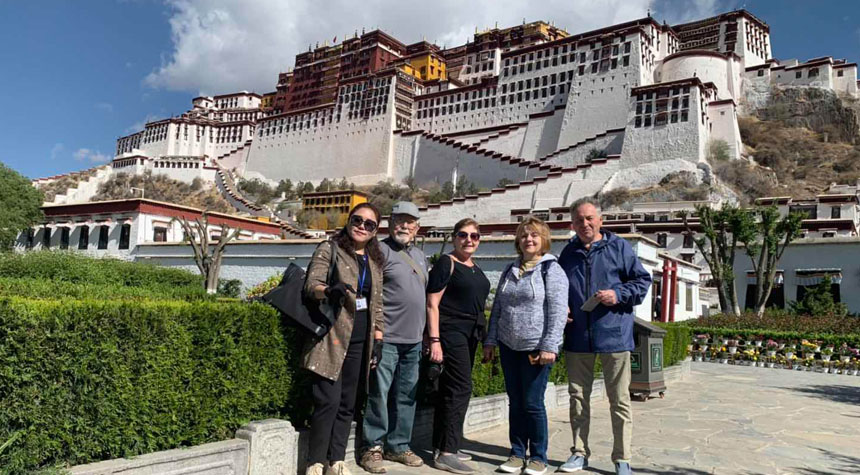 Lhasa in April is a best time to visit since the bright sunshine and warm weather.

For warmer periods of the day, prepare pullovers and tuxedoes, shirts, light jackets, and, when remaining in the city, sneakers.

Because of the high UV index and elevation, you need efficient sun protection while visiting the City of Sunshine. Therefore, don't forget to apply sunscreen with a high UV protection to the face, ears, and other exposed body parts.

Sunglasses, a brimmed hat, and lip balm are other handy accessories you should have while visiting the Roof of the World and Tibetan capital.

With temperatures that remain well above 0°C/32°F most of the time, Lhasa, Tibet, finally basks in spring weather. With an occasional cloud cover forming above the city, the skies remain clear and blue most of the daylight. So, if you are a hiker, trekker, birdwatcher, or devotee of any other outdoor activity, April is the ideal month for you to come here. 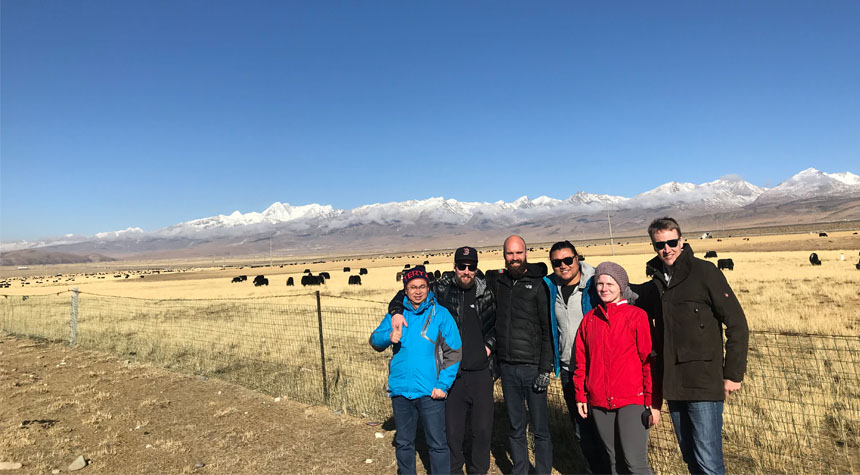 Taking a tour to enjoy the unique scenery in April

The countryside around the city awakens from its winter slumber, as well as other high-altitude regions. Spotting animals, such as yaks, antelopes, and birds (including Griffon birds - iconic Tibetan vultures) becomes easy and worthwhile. Also, viewing the panorama of Lhasa from vantage points in the city offers a premium experience.

Travel-related costs increase this time of year, but not much when compared to previous months. This stands in particular for airline and hotel deals, but also for prices of guided tours.

Depending on the selected tour, April prices may be between a few % and 10% higher than in March. However, the number of departures is significantly lower in the previous month. Therefore, April offers you higher flexibility for the beginning of your Lhasa and Tibet trip for a little higher price.

For example, the typical price of the four-day Lhasa City tour in March is $390. Its cost in April is $420. But as you can see, there is only one scheduled date in the first month of spring, while the second has multiple schedules.

During the guided tour, you will familiarize yourself with iconic tourist attractions of the capital. Potala Palace (a former winter residence of Dalai Lamas), Barkhor Street, and Jokhang Temple (House of Buddha) are some highlights. Also, you will visit two of the Three Great Monasteries of Tibet - Sera and Drepung.

Traveling overland from Lhasa to Kathmandu, Nepal, is the most favorite road trip in the Himalayan region. It includes a stop at Everest Base Camp, from where you can access point for unobstructed views of Mount Everest. For a 10% higher price in April, you can choose among a dozen departures instead of a few in March.

Booking a Flight or Train for Tibet

April is a shoulder tourist season in Lhasa and the autonomous region of Tibet. Compared to winter months, the number of travelers coming to the Roof of the World is on the rise. However, the peak tourist season is still a few months away.

Therefore, you won't have issues booking a seat on a flight or in a train compartment. Most airlines flying to the City of Sunshine depart from major Chinese cities. The only international flight to the Tibetan capital takes off from Kathmandu, the Nepali capital. 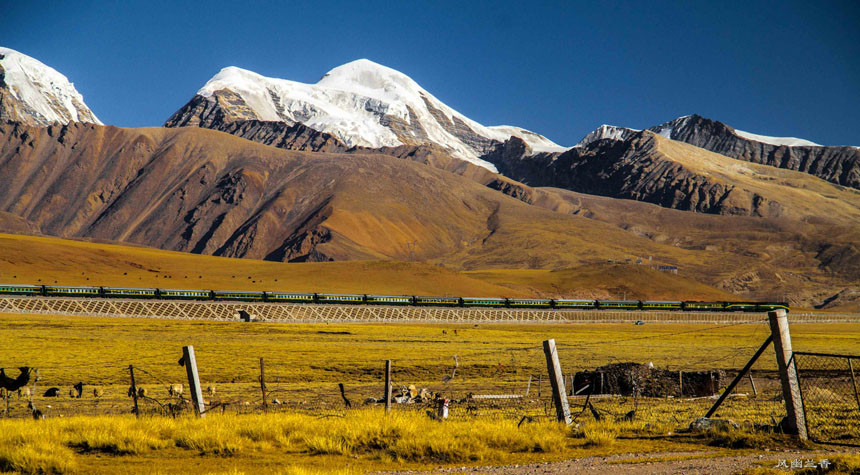 Riding a Tibet train to Lhasa has become a rather good choice of traveling to Tibet.

As for Tibet trains, you can board those in Beijing, Shanghai, Guangzhou, Chengdu, and a few other metropolises in China. Travel times vary depending on the distance, and trains offer a fascinating overview of the Tibetan countryside. Please note that you need to present Tibet Travel Permit to board the Tibet train.

Trains have an oxygen supply and Hard and Soft sleepers. Affordable hard sleepers feature six beds that are smaller in size than those in soft sleepers. Except for fewer beds, travelers in soft-sleeper compartments benefit from better privacy.

Besides touring Lhasa points of interest, taking a trip to Nyingchi Prefecture and Namtso Lake are especially rewarding during this period. 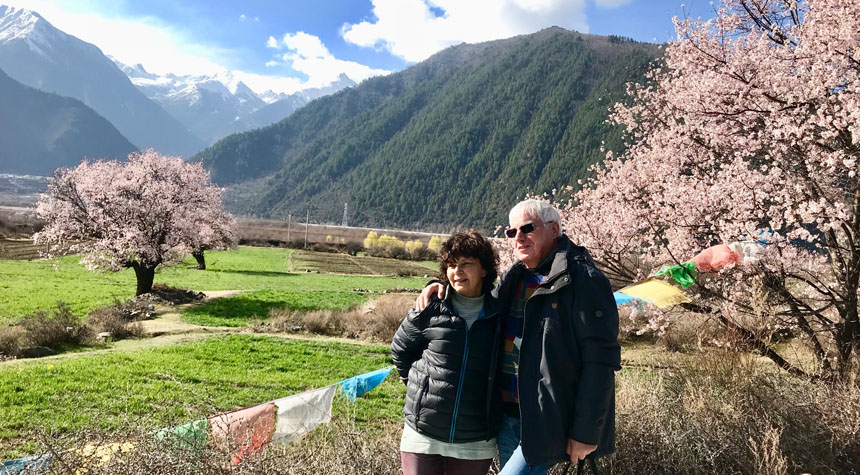 Nyungchi lies at a lower altitude than the City of Sunshine, and spring is in full swing there. The highlight of the prefecture is peach blossoms, which color the landscape in violet and other gentle colors. Snowy mountains and green valleys make a perfect backdrop for first-class photo sessions.

Note that the peach flowering begins around mid-March. So, make your trip to the Nyungchi prefecture early in April to relish the colorful spectacle at its best. Also, you may attend the annual Peach Blossom Festival, which takes place at different dates each year.

Namtso Lake is among the highest lakes in the world and the second-largest salt lake in China. It is also sacred to local Tibetans and, thus, one of the unmissable attractions to visit. Namtso is several hours away from the principal city of Tibetan Plateau by car.

During this period, you may find snow and ice around the lake. Once the ice melts, you can admire crystalline waters reflecting passing clouds. Hills, distant snow-capped peaks, and roaming yaks will be within sight, too.

Tips for Trips Outside Lhasa

Besides March, April is the best month for seeing Mount Everest, the highest peak of the Himalayas, at its best. Due to thin to non-existent cloud cover, views of the imposing mountain are excellent at any time of the day. However, you should take a view of the summit as the sun rises and descends. 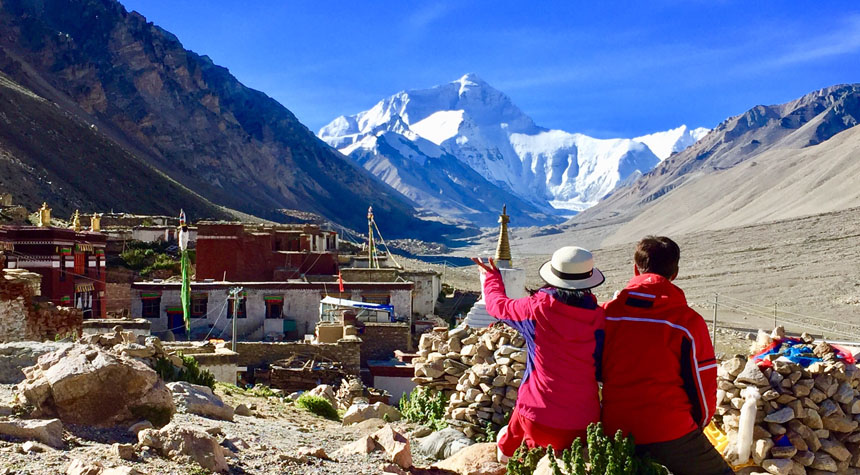 EBC weather in April is a little colder than Lhasa.

Therefore, go to sleep early on the day of your arrival at Everest Base Camp and wake up before dawn. Also, admire the starry sky in its full glory at night. The glow of the stars is so bright due to the absence of pollution.

There might be doubts the road running from Kathmandu to Lhasa is passable in winter. Then, snow can make some high-altitude passes inaccessible. However, the Friendship Highway is fully passable when spring takes hold in Tibet.

Devout trekkers and pilgrims also have cause for satisfaction with the arrival of April. During this month, the trekking season around Mount Kailash and nearby Lake Manasarovar begins.

In April, you can virtually travel around Tibet without limits for the first time since the beginning of winter. As plants start to grow and sprout leaves and flowers, you can capture photos featuring snowy mountains, blue sky, and green oases. In Lhasa, the capital of the Roof of the World, you benefit from low tourist crowds and affordable deals.

When you decide to visit the City of Sunshine and Tibet, get in touch with a proven travel agency for the details. As a reputable tour operator, China Tibet Train Tours can help you obtain necessary documents and make all arrangements for your holiday in Lhasa and Tibet.

Most Recommended Tibet Tour In April