Lhasa Attractions: What to See in your Lhasa Tour besides the Potala Palace

When most tourists think of Lhasa, the top destination of all Tibet tours, they automatically think of the Potala Palace. But Lhasa is so much more than just one ancient palace built on a hill.

From its narrow ancient streets and stunning architecture to the sacred temples and monasteries, there is more to see in Lhasa than you would have thought possible.

Other Must-See Attractions for All Lhasa Tour

When touring Lhasa, there are more things to see than just the Potala Palace, and you will be surprised at the number of amazing attractions this ancient high-altitude capital has to offer.

Known as the most sacred temple in Tibet, the Jokhang is one of the most visited tourist attractions in Tibet. 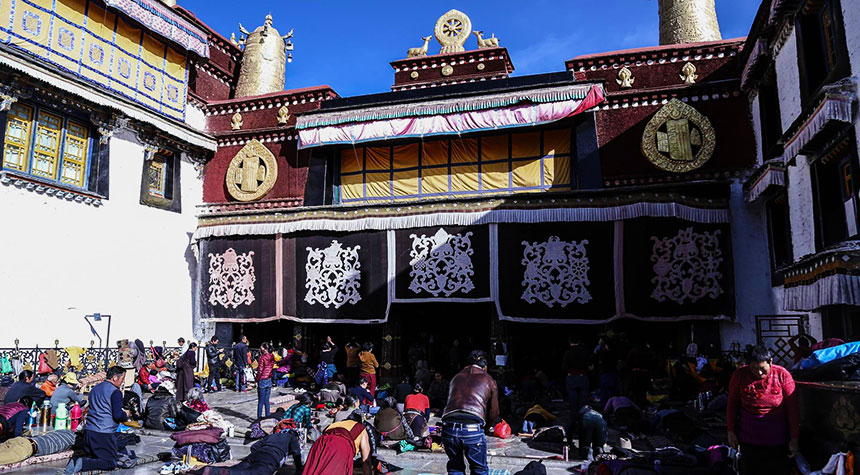 Local Pilgrims praying in front of the Jokhang Temple

Surrounded by the renowned Barkhor Street, this ancient temple is the pilgrimage destination of thousands of Buddhist pilgrims, who come here to pray at the temple.

Home to the famous Jowo Rinpoche Statue, the oldest known statue of Buddha, walking these ancient halls, seeing the variety of statues and murals, and experiencing the serenity that can be found inside is an awesome experience.

The renowned route of the Jokhang kora, the ancient walk around the temple for merits on the journey to enlightenment, this unique road is actually made up of five streets and is well known for being a major shopping area in Lhasa.

Not only can you enjoy the walk around the temple, alongside devout Buddhist pilgrims, but you can actually take part in the kora, and feel the emotions of the people as they trudge around the route.

Also, you can pick up some great souvenirs along the way. 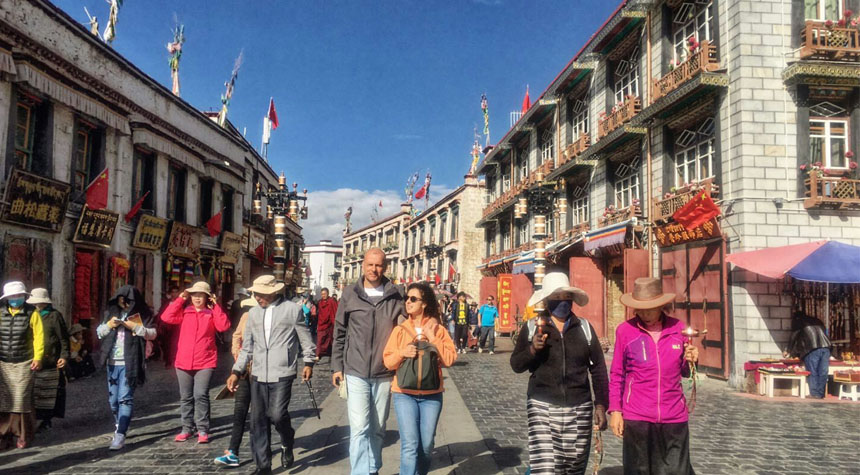 Don't miss the chance to walk along the Barkhor Street in your Lhasa Tour.

One of the major monasteries of Tibet, Sera Monastery lies to the north of the city center and is renowned for its famous monks debates.

Lively and extravagant, the Tibetan monks debates held in the courtyard are a way of teaching and learning the scriptures and beliefs of Buddhism, and are an amazing sight.

Filled with lots of articulate gestures, stamping of the feet, and hand clapping, these debates can go on for hours. 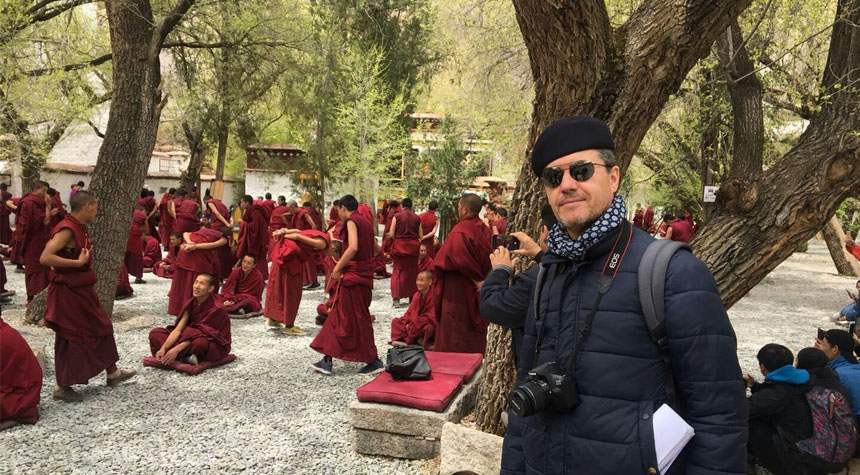 The largest monastery in Tibet, Drepung Monastery is one of the Great Three Gelug monasteries of Tibet.

The original seat of the Dalai Lama, before he gained that title, Drepung is renowned for its rich Buddhist history and is the ideal destination for exploring the Tibetan religious heritage. 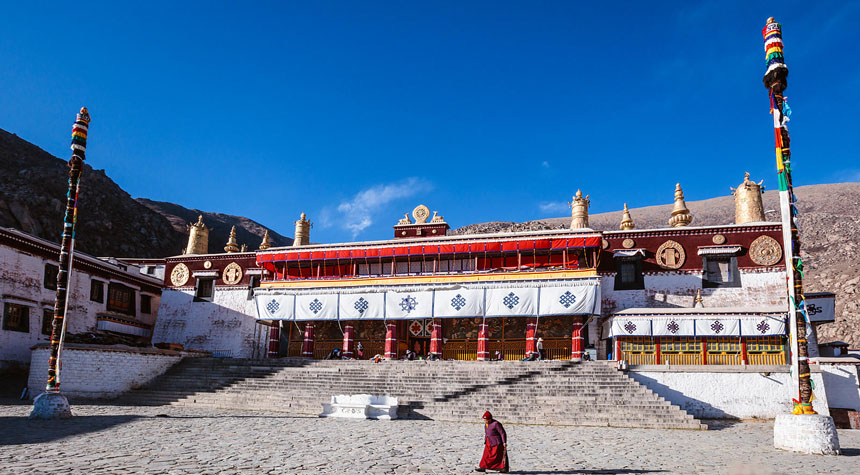 Lhasa is known as the center of Tibetan Buddhism, and this can be seen clearly in the large number of monasteries in Lhasa. As well as those most popular monasteries, Lhasa also holds some of Buddhism’s most outstanding monasteries.

Built by the founder of the Gelug School, Ganden Monastery was once the seat of power in Tibet.

Lying more than 50km from the city center, this ancient monastery is filled with historic and cultural relics and has a charm all of its own.

Renowned for the Tsongkhapa Butter Lamp Festival, in honor of its founder, this is one monastery worth taking the time to visit. 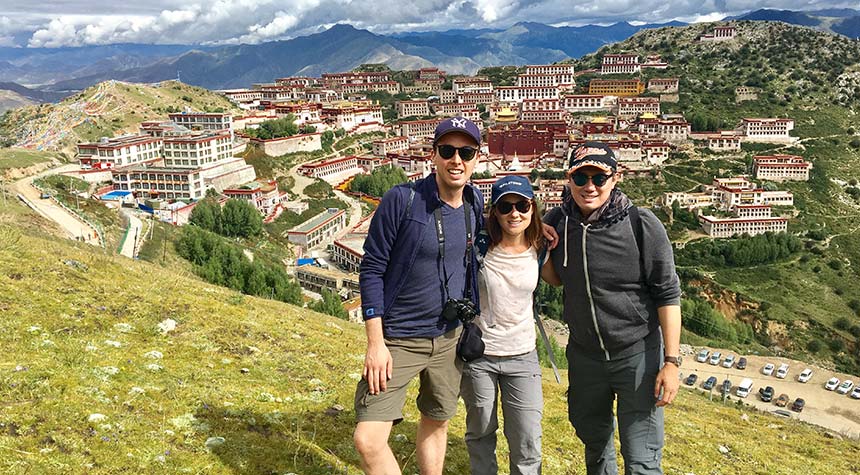 Sister temple to the Jokhang, Ramoche was the temple originally containing the Jowo Rinpoche statue now located in the Jokhang Temple.

Now home to the Jowo Mikyö Dorje, the statue brought to Tibet from Nepal by the wife if the Tibetan king, this 7th century temple has the secret chamber where the Jowo Rinpoche was hidden from the invading Tang Dynasty armies.

Lying around 16km northeast of Lhasa, the Drak Yerpa monastery is an excellent day trip from the city.

Its peaceful and serene location provides amazing views, while its holy cave retreats provide an insight into the lives of the ancient hermits who lived on this hillside for centuries. 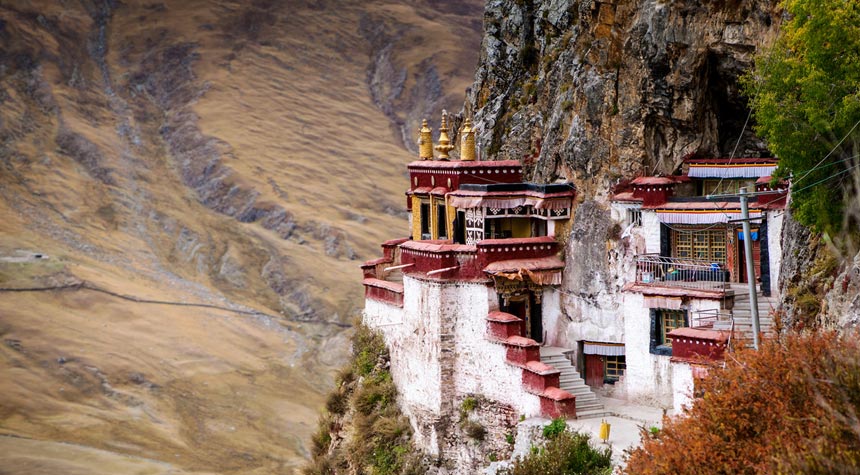 Drak Yerpa Monastery is a less-traveled monastery in Lhasa.

A notable monastery around 150km to the east of the city, Drigung Til monastery has traditionally been one of the main monasteries for practicing the ancient sky burials of Tibetan Buddhists, where vultures eat the remains of the dead.

A place of eternal serenity, the site of the sky burials is sacred and still used to this day to dispose of the corpses of dead Tibetans. 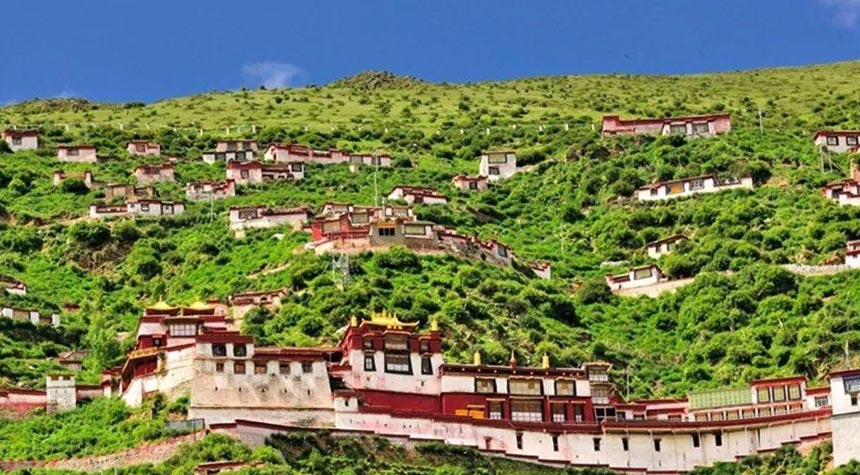 Drigung Til Monastery in Lhasa

While most religious sites in Tibet are focused around monasteries and monks, there are also several notable nunneries in the area which are worth visiting during your Lhasa tour. Less visited than the monasteries, these peaceful sites are no less amazing.

A renowned nunnery belonging to the Gelug School, the Canggu Temple nunnery is home to hundreds of Tibetan Buddhist nuns. Located in the Old Town of ancient Lhasa, this serene nunnery is a popular spot for relaxing and drinking the locally-made tea after a tour of the chanting halls and weisang furnace in the courtyard. 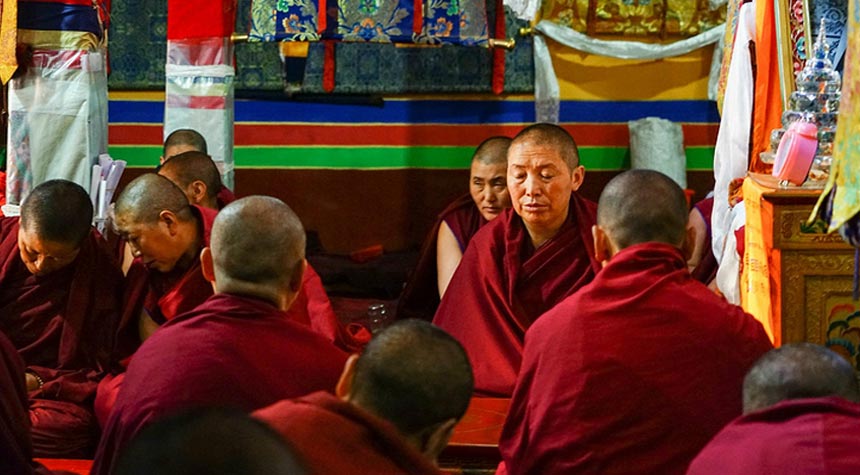 Located north of Lhasa, Chupzang Nunnery was originally just a hermitage that grew in size to become one of the largest nunneries in Tibet. Passed from one sect to another over the centuries, this 17th century site began with just eight monks, but now houses more than a hundred nuns in permanent residence.

Local Parks and Gardens in Lhasa

A unique aspect of life in Lhasa is the penchant for using the local parks. As sites for Tibetan operas, local folk dancing, and a popular destination for picnics, parks in Lhasa are the best places to meet the locals.

Built in 1755, Norbulingka was constructed as the new summer palace of the Dalai Lama, and is renowned for its carefully sculpted gardens.

Located to the southwest of the Potala Palace, this ancient palace lies on 89 acres of grounds, and is considered to be the largest man-made garden in Tibet.

The park is also famous for being the location of the Shoton Festival, one of the biggest festivals in Tibet. During Shoten Festival, many celebration activities will be held in the park, such as Tibetan opera shows and traditional Tibetan dancing performances.

During Shoton Festival, there will be traditional Tibetan operas performance in Norblingka park.

It is also a popular place for Tibetans to spend their leisure time. Enjoy the local Tibetan opera played here daily, while sipping on hot sweet Tibetan tea. 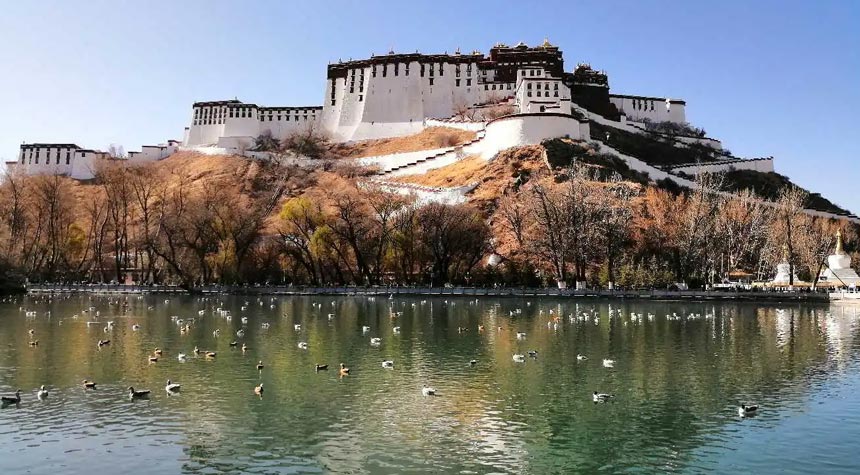 The view of Potala Palace from Dragon Lake Park

Apart from the famous sightseeing spots in Lhasa, there are also some interesting local markets to visit.

You can appreciate the handicrafts made by the local artisans and buy travel souvenirs there.

An amazing experience that rivals any other market street in the world, Barkhor Street is the best place for tourist shopping for souvenirs in Lhasa.

A paradise of Tibetan delicacies and unique architecture, Barkhor Street is the ideal place to find the local traditional handicrafts from across the entire plateau region.

The oldest market in Lhasa, dating back to around 1727, the market sits in the former Qing Dynasty minister’s office and has been the main market in the city for more than 300 years.

Ideal for buying commodities such as agri-products, garments and shoes, snacks, fruit and vegetables, and much more, this is a great place to do shopping and then relax with some tea.

Located in Barkhor Street, this handicraft market is filled with souvenirs and local handicrafts from all over Tibet.

With much more range of locally-made goods than anywhere else, including Barkhor Street, there is no better place for buying your Tibetan ornaments and jewelry, as well as many other local goods and produce.

Tips for Shopping in the Local Markets in Lhasa

Most of the shopping in Lhasa takes place in Chengguan District, which attracts crowds of tourists. If you want to avoid the crowds, go as early as possible, or late in the evening.

There are many jewelry shops in Lhasa selling Tibetan ornaments, Nepalese jewelry, etc. Please double-check the quality of the jewelry before buying.

You can bargain at the local markets to take a discount.

If you want to buy a Tibet knife, please notice that it cannot be carried on the plane, so you need to mail it home.

How to arrange your tour in Lhasa?

Usually Arrange 2 or 3 Attractions a Day

If you are planning a tour of Lhasa, then you should be considering 2 or 3 attractions per day, to make the most of your time here.

For example, a 4 days Lhasa city tour can be well-arranged by visiting the Potala Palace and the Jokhang Temple in one day, and visiting Drepung Monastery and Sera Monastery on the other day.

You can spend time visiting these attractions of this beautiful city easily, without the need to rush around each site. And with the attractions of the city located close together, there is not too much travel between them.

You Can Choose a Hassle-free Lhasa City Group Tour

The best way to see Lhasa is on a hassle-free group tour in Tibet. This gives you the best opportunity to explore this beautiful city, and is perfect for first-time travelers to Tibet and Lhasa. 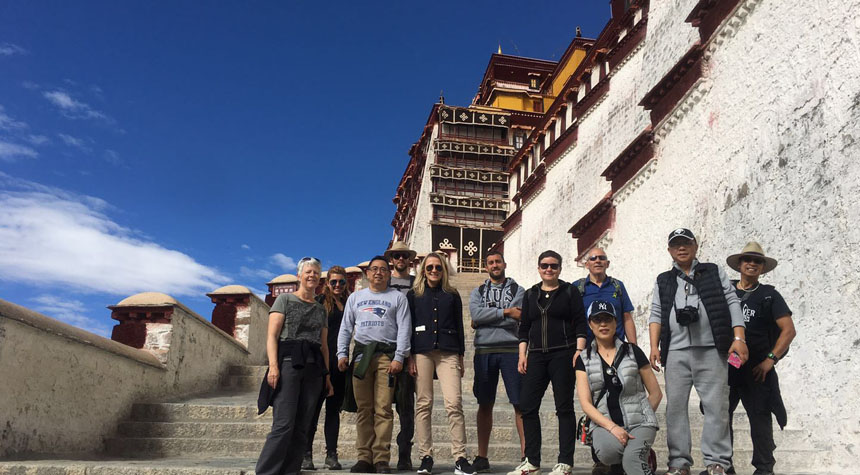 The pre-set itinerary is designed to make the most of the time you have in Lhasa, and covers the essential highlights of the City of Sunshine. And you can make friends with the other travelers, from all over the world.

Or Customize Your Private Lhasa Tour

If you want a little more flexibility in your Lhasa tour, then a private tour is the best option.

By customizing your private trip, you can choose where to go and when, as well as what you want to see, and how long to spend in each destination around Lhasa.

And while it may be more expensive, a private tour allows you to personalize the trip to meet your own specific requirements.

Lhasa is renowned as the highest capital city in the world, and has more attractions that most people would have believed possible in such a desolate and harsh land.

While the capital may be famous for its Potala Palace, the icon of Tibet, this beautiful city has much more to offer international travelers, and is the perfect place to get your first insights into the unique Tibetan culture and religion.

The most convenient way to get the best of Lhasa city is to join in a pre-arranged small group tour. But for more flexible, you can also tailor make your own trip to the holy city.

No matter which way you choose to go, we are always ready to offer you the best travel advice.

0 Comment ON "Lhasa Attractions: What to See in your Lhasa Tour besides the Potala Palace"