Viewing Potala Palace from Your Hotel Room in Lhasa

Reputed as the pearl on the world's roof, Potala Palace is the masterpiece of Tibetan building and the landmark of Lhasa. Besides visiting this grand palace with numerous tourists in the daytime, you can also appreciate it tranquilly from your hotel rooms when traveling Tibet.

International tourists can only stay at hotels which are certificated to receive foreign customers. You can book the hotel by yourself or contact us to book hotel for you according to your requirements.

Within 10 minutes' drive of the Potala Palace, Lhasa Shangri La Hotel lies to the west of the palace, and offers side views of the palace from many of its rooms. In fact, the hotel has the most rooms with a Potala Palace view of all the hotels in Lhasa. The rooms are less available in the peak season than in the low seasons, and its close location to the palace makes it an ideal choice for discerning tourists. 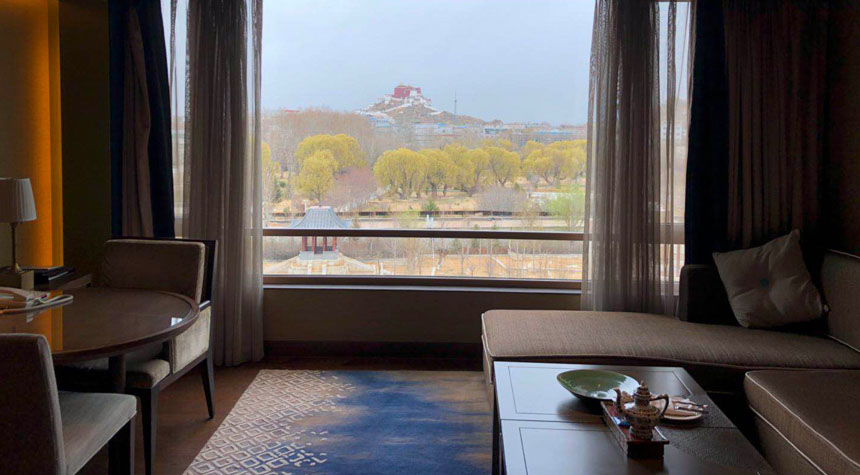 Shangri La hotel has the most rooms with view of Potala Palace.

Ranking first in TripAdvisor as one of the most popular hotels in Lhasa with international tourists, the St. Regis is well designed with a sumptuous interior and comfortable rooms. However, only around ten rooms have a view of the Potala Palace to the northwest, so you need to book in advance to be sure to get one. About 10 minutes’ walk away from Jokhang Temple, you can take a leisure stroll around it to feel the religious atmosphere of Lhasa. 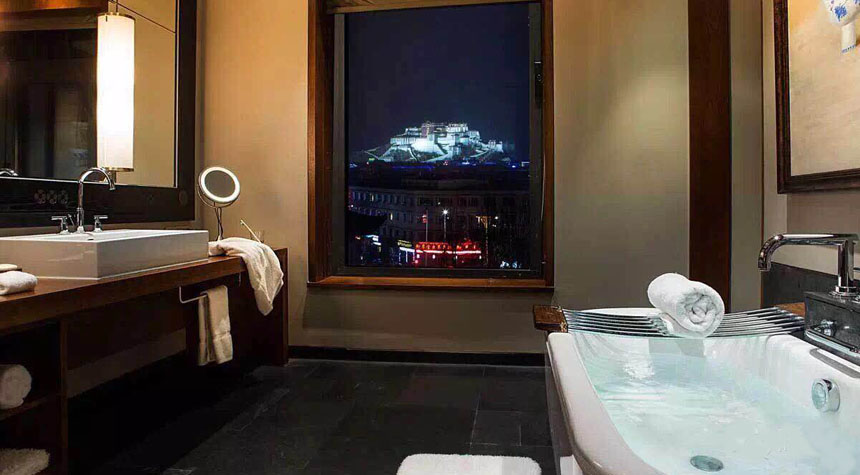 Lying just 4km to the east of the Potala Palace, the Manasarovar Hotel is one of the most luxurious hotels in the city, and has some great views of the palace from its west-facing rooms. The hotel also has great views across the Lhasa River, and is located conveniently close to the Jokhang Temple and the city center, yet far enough out to be in a quieter location.

Sitting just north of the Lhasa River and with great views out across this beautiful river to the south, the Four Points Sheraton is less than 3km from the Potala Palace, and has some great views from around a quarter of the total rooms in the hotel of the Potala Palace to the northwest. The hotel is also ideally located for the city center and the Jokhang Temple.

Sitting close by the Manasarovar Hotel, the Brahmaputra Grand Hotel has some good rooms with a view of the Palace, though they are limited and very popular with their foreign guests. You do need to book early to make sure you can get one of their limited palace-view rooms.

A small but well-kept hotel, the Xin Din lies around 3km to the south of the Potala Palace, on the northern bank of the Lhasa River. All of its north-facing rooms have great palace views, as do several of the east-facing rooms. These are popular with international tourists, so you do need to be specific on booking, especially in the peak season.

Directly east of the Potala Palace, the Lhasa Gang Gyan Hotel also lies just north of the Jokhang Temple, in the center of the city. The hotel is popular with foreign guests that want to be centrally located, and it has a number of west-facing rooms with good Potala Palace views. There is also a dedicated Potala Palace Viewing Balcony on the fourth floor that is open to the general public. 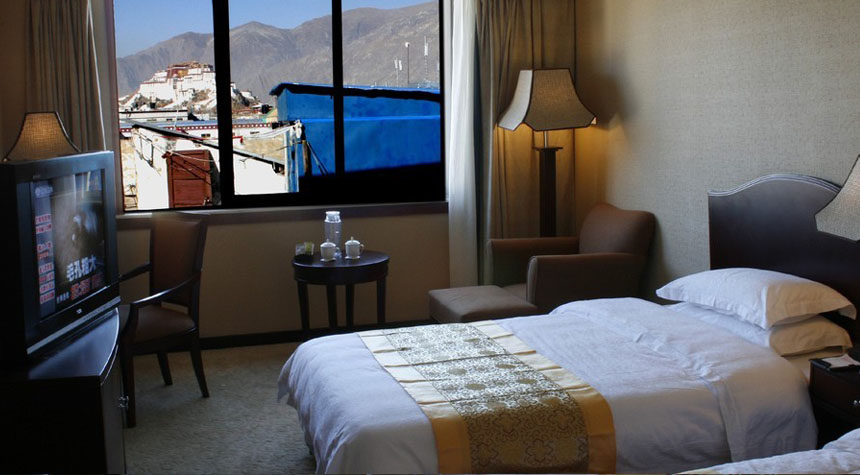 You can admire the grandeur Potala Palace in your rooms or at the viewing balcony of Gang Gyan Hotel.

Located to the northeast of the Potala Palace, the Tashi Nota Khangsang Hotel is a quiet and peaceful place at night, a little away from the busy center of Lhasa. The rooms with the views of the Potala are in the western wing of the hotel, and you have rooms, suites, and family rooms that have a good view of the palace to choose from.

Located just a short distance to the northeast of the Jokhang Temple, the Yak Hotel actually has some great views of the Potala Palace from its west-facing rooms. The palace, which lies directly west of the hotel, can also be seen well from the hotel’s roof garden, which is open to the public.

Hotels without room with Potala Palace views, but still worth staying at

Though without rooms offering views of Potala Palace, the following hotels, which can offer oxygen room for sound sleep or authentic Tibetan-style decoration, are also worth your staying.

Though it doesn’t offer room with view of Potala Palace, it offers free oxygen in rooms and an oxygen bar, which is very helpful for preventing altitude sickness and assuring a good night’s sleep, especially in winter months. Styled after the great pyramids of Egypt, the Intercontinental offers some great river views instead, and has a relaxing atmosphere. 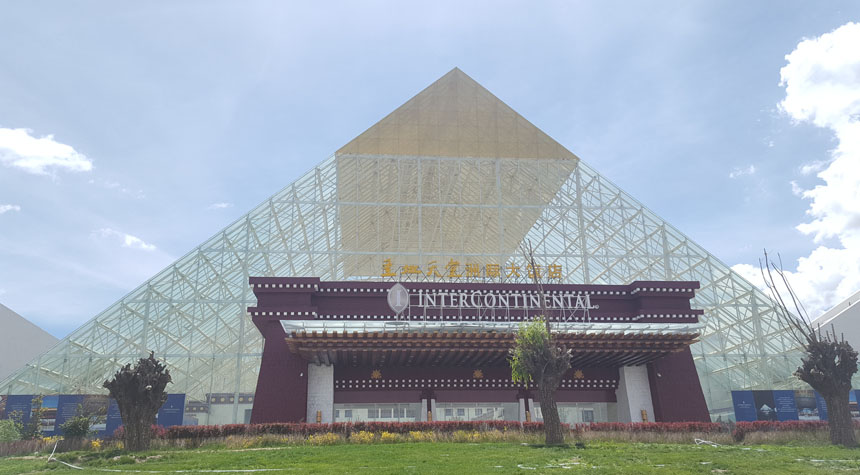 The oxygen rooms in Lhasa Intercontinental Hotel provide you with a sound sleep on the Roof of the World especially in winter days.

Lying far to the northeast of the palace, this delightful hotel does not have the views of the palace that others offer, but it does offer some stunning gardens in its own large grounds that can help you relax and feel the real tranquility of the City of Sunshine. And with all the facilities of a luxury hotel in a four-star setting, you can be sure your worries will wash away in this peaceful hotel.

Hotels in the Old Quarter

If you are looking for a hotel close to Old Lhasa, then you do have some good options. Old Lhasa is the area around the Beijing East Road, with the Jokhang Temple at the center. Here you have such hotels as the three-star Tashitakge Hotel, the delightful Bangdacang Compound with its own al dente restaurant, and the 2-star Daxia Family Hotel, which faces directly onto the Barkhor Street South. 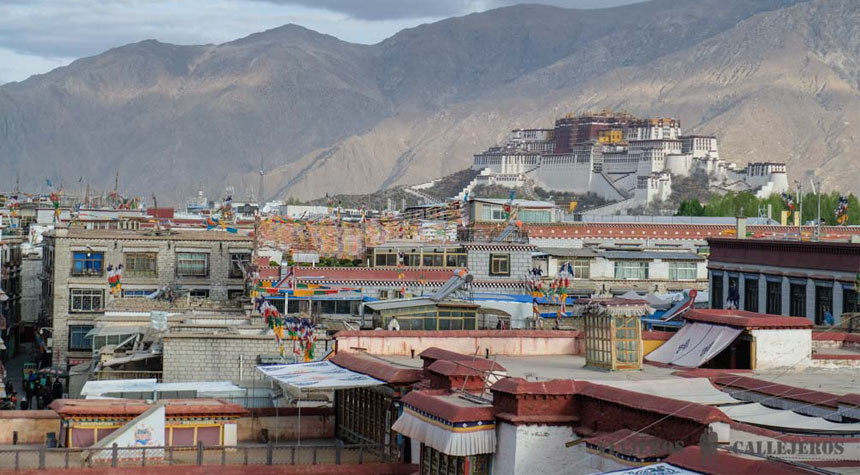 The views of Potala Palace from the balcony of Tashitakge Hotel.

If you are looking for those classic hotels in Lhasa that are renowned for their traditional typical Tibet decors, then you will not be disappointed, as there are plenty to choose from.

The Lhasa Dhood Gu Hotel lies just 2.3km from the Potala Palace and 100 meters from the Jokhang Temple, but has limited views. It is more popular for its traditional Tibetan décor, which the owners have gone to great trouble to restore and preserve.

The Lingtsang Boutique Hotel on Lugu 1st Alley is a traditional Tibetan-styled building, much of which looks like it has stood there for a thousand years already. The interior has all the original Tibetan decorations from before it was ever a hotel, and the typical Tibetan roof garden is the perfect place to relax. 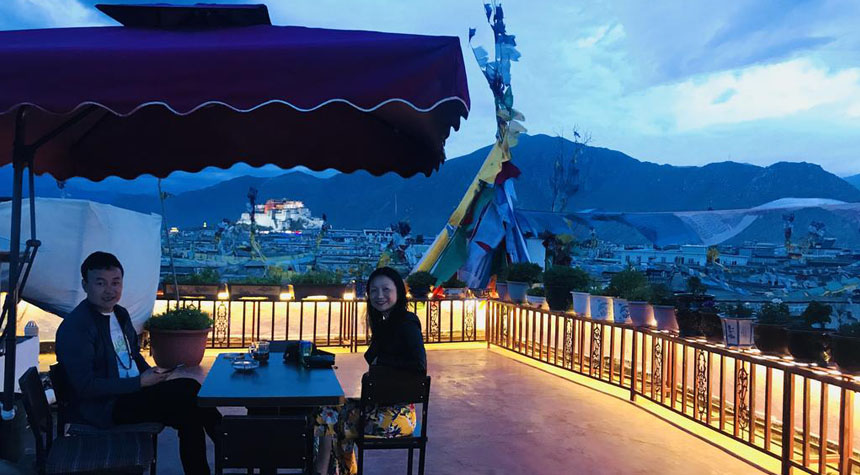 When it comes to typical, Tibetan styling in a hotel, the Kyichu Hotel on Beijing East Road is a perfect example of traditional decoration and styling, as well as having staff that hold the traditional Tibetan values and customs to heart. More like staying in a Tibetan family home than a hotel, this is one of the best cultural experiences in Lhasa for this grade of hotel. Named after the Kyichu River, otherwise known as the Lhasa River, the hotel lies between the Jokhang and the Potala in the Old Quarter of town, and is one of the oldest private hotels in Lhasa.

While getting a view of the Potala Palace from your hotel may be an important option for you for your Tibet tour, there are plenty of other options for hotels in Lhasa if the view is not your main concern. A large number of hotels in Lhasa can see the massive palace on the top of the high Red Hill, so you do have plenty of options to choose from. But if this is not your main concern when it comes to choosing your hotel, you will find that you have a vast choice in front of you, and a much better range to choose from.