The Most Complete Collection of Mount Everest Routes

The classic tour route to Mount Everest on the Tibetan side is one of the most popular tours in Tibet, and incorporates several other stunning sites along the way. Tours normally start in Lhasa, the Tibetan capital, and run along the G318 Friendship Highway to get to the mountain in the west of the region.

Before leaving for Mount Everest, tourists can spend a few days in Lhasa acclimatizing to the increased altitude and seeing the sights of the city, including the Potala Palace, Jokhang Temple, and the Sera and Drepung Monasteries.

Once outside Lhasa, the route takes you through Gyantse, where you get to see the beautiful Gyantse Kumbum, the only stupa of its kind in Tibet, which stands 32 meters tall and houses 108 small chapels. The Kumbum is set inside the Pelkor Chode Monastery, which is famed for being the only monastery in Tibetan Buddhism that houses three separate schools of Buddhists under one roof, the Sakya School, the Kadampa School, and the Gelugpa School. 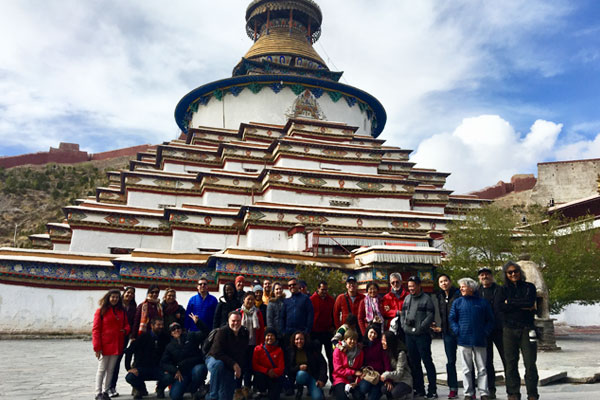 After Gyantse, you will arrive in Shigatse, where you can visit the Tashilhunpo Monastery. Built in 1447 by the first Dalai Lama, it is the traditional seat of the Panchen Lama, the second highest incarnation in Tibetan Buddhism. After leaving Shigatse, you will head for the Rongbuk Monastery and Everest Base Camp (EBC).

The monastery is the highest monastery in the world and has been used as a stopping point for tourists and climbers heading for Mount Everest for decades. It is also the location of one of the best views of Mount Everest in Tibet, and getting up early to watch the sunrise hit the slopes of the world’s highest mountain is worth the lack of sleep.

From the base camp itself, you can get the closest view of Mount Everest in the world. Just 12 kilometers from the actual peak, the base camp in Tibet is the primary spot for photos of the mountain, and is a unique experience that you will never forget.

For those that are interested in trekking to the mountain, there are various trekking routes that you can take, in both Nepal and Tibet. Trekking at high altitudes requires a high degree of physical fitness, and a lot of preparation. However, it is possible for novice trekkers to make the treks as long as they are careful, attentive, and well prepared.

The main route to Everest in Tibet runs from the town of Old Tingri on the Friendship Highway to the base camp, a distance of around 70 kilometers over some of the area’s most impressive landscapes. While it is not the hardest trek in Tibet, it does have its arduous stretches, and has a unique charm in the way you crest each rise and pass and can see the world’s highest mountain getting closer each time. 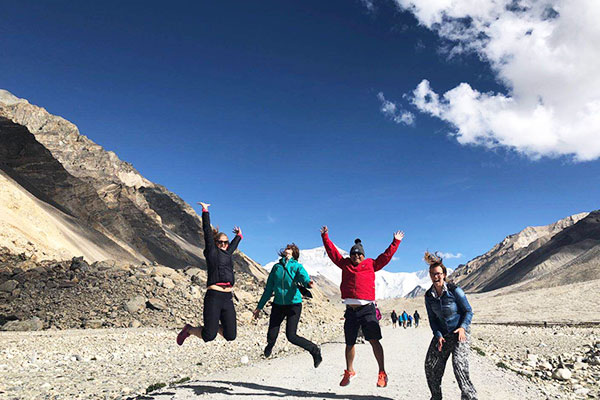 Trek to Everest Base Camp in Tibetan side from Tingri

From the town of Old Tingri, the route heads south through several villages and settlements, where you can see the local Tibetan people going about their daily business, many in much the same way as their ancestors more than a thousand years ago. Life in the far west of the plateau has not changed much over the centuries, and the trek is an ideal opportunity to see some of the ancient hamlets of Tibet, unchanged for centuries, during your Tibet tours.

In Nepal, there are several different routes that incorporate the Mount Everest Base Camp, with the classic and direct route being the most popular. The classic route takes you from Lukla, a town built halfway up a mountain, through the delightful valleys and mountain passes of the Khumbu region to the base camp of Mount Everest. From Kathmandu, you need to take a flight to Lukla, which takes around 45 minutes. From there the trail to EBC passes through several small villages and towns. Many of which are Sherpa towns, including the Sherpa capital of Namche Bazaar.

Along the route, most trekkers take two days for acclimatization, as the trail ascends from around 3,440 meters to a staggering 5,364 meters at the base camp. Namche Bazaar is usually the first rest day, with either Pheriche or Dingboche being the second, depending on which fork in the trail you take to get to Dugla.

Once you get to the last stopping point on the trail before EBC, at Gorak Shep, you would need to take a side trip to view the mountain. The summit of Mount Everest is obscured by the ridge and peak of Mount Nuptse, part of the Everest Massif, so the side-trek heads up to a place called Kala Patthar, on the ridge of Mount Pumori, from where you will get the best view of Everest in Nepal. After taking your photos and contemplating this massive peak, you can climb back down to Gorak Shep and then take the trail the rest of the way to EBC.

Along the route to EBC from Lukla, there are various side trails that you can take to get to EBC in a more roundabout route, which take you to some of the most stunning sights and attractions of the Khumbu Region. These routes include trips to the Gokyo Lakes, which lie on the slopes of Gokyo Ri, a mountain to the east of Everest that has some of the best views of the Himalayas that you will ever see. There is a fork in the main trail about two hours after Namche Bazaar, which takes you on a trek to the summit of the mountain, at 5,36 meters above sea level.

For those that love to climb mountains instead of just photographing them, there are two possible routes to ascend Mount Everest to the summit. And while each has its own good points, neither is actually very easy, so it requires you to be experienced in mountaineering before you make the attempt.

The South Col Route is the route that was taken by the famous climbers, Tenzing Norgay and Edmund Hillary, on their conquering ascent of the mountain in 1953. The ascent via the South Col starts at the base camp, after a long hike from Lukla and several days or even weeks of acclimatization once you get there. The first obstacle is the Khumbu Icefall, which is widely regarded as the most dangerous section of the climb. Sherpas normally set propes and ladders for the climb before it is started. 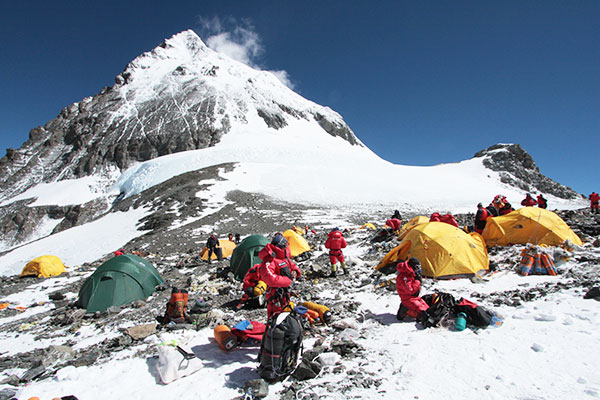 The ascent via the South Col route starts at the base camp.

Once over the icefall, you will make your way up the Western Cwm to the base of the face of Mount Lhotse, at Camp 2 or the Advanced Base Camp. Crossing the Cwm can only be done on the right-hand side, as the ice is full of deep cracks and crevices that make a central climb impossible.

After the Cwm, the ascent of Lhotse is done using ropes up to Camp 3, on a small ledge 7,470 meters above sea level. To get to Camp 4, you will need to climb over the Geneva Spur, an anvil-shaped rib of rock that sticks out from the face of the mountain. Fixed ropes are needed to get around this, and then on to the Yellow Band, an interlayered section that consists of several types of rock, including a layer of marble.

The South Col itself is known as the “Death Zone” to mountaineers, and is the hardest part of the climb, as climbers can rarely stand more than a couple of days at this altitude. If the good weather persists, then a push to the summit can be made, heading over the South Summit and the Hillary Step to get to the main summit of the mountain. However, the peak can only be endured for a short time, and climbers soon descend to Camp 5 to spend the night after reaching the peak.

The Northeast Ridge route, sometimes known as the North Col route, starts in Tibet, on the northern side of Mount Everest, and was the first route that was attempted for scaling this massive peak. Expeditions start in Tibet at the Rongbuk Glacier, just a short distance above the Tourist Base Camp. 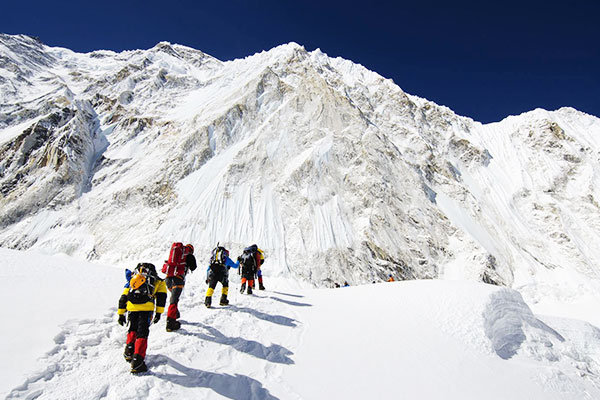 Camp 2 lies above the glacial moraine that descends from the Rongbuk Glacier, which is at the base of Mount Changtse. Camp 3, or the Advanced Base Camp, lies at 6,500 meters, at the edge of the glacier below the North Col. From there it is a hard-technical climb to Camp 4, which is actually on the North Col itself. Fixed ropes are needed her to ascend the North Col from Camp 3 to Camp 5, with the stop at Camp 4 in the middle.

From Camp 5, the route crosses the North Face diagonally, heading up to the Yellow Band and Camp 6. Camp 6 is the final camp, at 8,230 meters, and the last push to the summit is made from there. The route to the summit involves going over three “Steps”, which are the main crux of the climb, and which have taken the lives of hundreds of climbers in the past century, including the fateful attempt by Mallory that ended in disaster.

From the First Step to the Second Step are a series of metal ladders that were put in place by a party of Chinese climbers in 1975, and which are universally used to get to the Second Step. Once over the Third Step, a fairly inconsequential ridge in comparison to the First and Second Steps, it is a short push up the snow-covered slope to the summit ridge and the peak of Mount Everest, the Roof of the World.

If you are looking for some travel ideas to Mount Everest, why not check our Tibet Nepal tours? From the classic sightseeing trips to adventurous trekking tours, you can find something that fit your needs. Or you can just contact us online, and tell us what you are looking for, our experienced travel expert s will help you arrange your favorite tour.

0 Comment ON "The Most Complete Collection of Mount Everest Routes"