Kathmandu to Everest Base Camp: How Far and How to Get There

There are two base camps at the foot of Mount Everest, one in the south in Nepal and one in the north in Tibet. While both are amazing places to visit, they are very different, both in the way you get there and what you can see from the camp itself. Lying at altitudes of more than 5,000 meters, getting the base camps from Kathmandu, the Nepali capital, is a popular choice for many.

Where is Kathmandu and Everest Base Camp?

Located in the Kathmandu valley in central Nepal, Kathmandu is one of the most exotic cities in Asia and is the starting point for many trekkers and tourists traveling to the base camps at the foot of Everest.

The Mount Everest, on the other hand, stands on the border of Nepal and China. The northern base camp of Mount Everest is located in Tingri County of Tibet Autonomous Region, at an altitude of 5200 meters. The southern base camp in Nepal is in the region of Khumbu, being over 5300 meters above sea level.

Get from Kathmandu to Everest Base Camp in Nepal

Fly from Kathmandu to Lukla

Getting from Kathmandu to Lukla is the first leg of this journey, and it is not as hard to do as you might think. Though there are two main routes you can take to get to Lukla, by land and by filght, the most popular way to go that chosen by most tourists is by flight.

Tenzing-Hillary airport in Lukla lies around 140 kilometers to the east of Kathmandu, and it is not the easiest airport to land at. Located in the Khumbu region of the Solukhumbu District, this small town has become one of the most popular in Nepal, thanks to it being the start of the EBC trek. 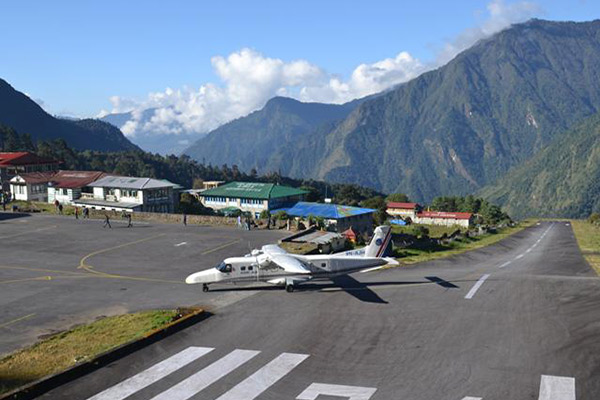 The most popular way to Lukla from Kathmandu is by flight.

Flights to Lukla from Kathmandu run daily, with around 5-6 flights per day, from 6:00 am to around 9:30 am. The flight averages between 30 and 45 minutes, and passes low over some of the Kathmandu Valley’s stunning scenery.

If you are thinking of traveling overland to Lukla, then the normal route is to take the local bus as far as Jiri, then trek from there to Lukla. It generally takes about three days to trek.

Trek from Lukla to Everest Base Camp

The trek from Lukla to EBC is one that normally takes around 12 days, with two days included for acclimatization at Namche Bazaar and Tengboche.

Day 1 runs from Lukla Airport, normally right after you land, to Phakding, the first small village where you can stop for the night. On Day 2, it is on to Namche Bazaar, the first rest day for acclimatization. After the rest day, Day 4 takes you on to Tengboche, at 3,870 meters. The trail heads out of Namche on a steep climb, but soon levels off through the villages of Kenjuma and Sanasa, before heading upwards again for the climb to Tengboche.

On Day 5, you will take the trail from Tengboche to Dingboche (4,350m), passing through the villages of Deboche and Pangboche along the way. There is a small nunnery that is worth visiting just by Deboche, that does not take you off the trail, and is a delightful rest stop for a short while. From Dingboche, Day 6 takes you on to Lobuche, where you will need to stop for the second acclimatization rest day. 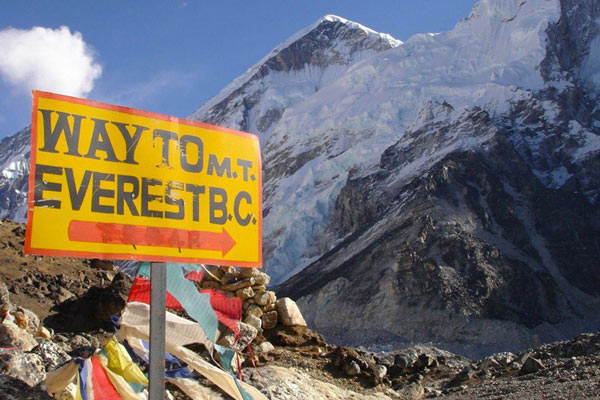 The trek from Lukla to EBC in Nepal normally takes 12 days.

After acclimatizing in Lobuche, Day 8 sees you heading for Gorak Shep, and is one of the best days for views of the surrounding mountains as you are now climbing higher into the Himalayas. After a light lunch at Gorak Shep (5,170m), you can then climb up to the famous Kala Patthar (5,545m), from which you get the best view of Mount Everest from the EBC trail. Since the summit cannot be seen from EBC in Nepal, this is the popular lookout point for viewing the peak of this massive mountain.

Day 9 is the final leg of the trek to EBC, which lies at 5,380 meters, and is the higher of the two base camps. The trek takes around three hours and gives you the best view of the Khumbu Icefall, the route taken by climbers heading for the summit of Mount Everest. Then it is back down to Gorak Shep for the night, before heading back to Lukla, a trek that takes around three days along the same route.

Get from Kathmandu to Everest Base Camp in Tibet

The straight line distance from Kathmandu to Tibet Everest Base Camp is about 160 kilometers， and getting there will be largely different. Since independent travel is not allowed in Tibet, and all trips to EBC in Tibet must be booked through a registered tour operator such as Chinatibettrain.com. And we can handle all the documents you will need for the tour, as well as your accommodation and provide the required tour guide, driver, and private vehicle.

Option 1: Kathmandu to Everest Base Camp via Gyirong Port

The overland route from Kathmandu to EBC starts with the bus ride to the border checkpoint at Gyirong Port. The route takes around 6 hours to complete, with a stop for lunch, and drops you at the Rasuwagadhi Fort side of the Resuo Bridge, the border between China and Nepal. Once through Chinese customs and immigration, your guide and driver will meet you and transfer you to Gyirong Town for the first night in Tibet.

From Gyirong Town, the route then takes you along the S214 provincial road to Xiamude, where you join the G318 Friendship Highway. At Old Tingri, you turn off the Friendship Highway, and head south towards Rongbuk Monastery, through wild grasslands and river valleys. From Gyirong Port to Rongbuk Monastery, the route covers a distance of 334 kilometers, and you reach Rongbuk and EBC in the evening of the second day in Tibet.

Option 2: Kathmandu to Everest Base Camp via Lhasa

Another way to get to EBC from Kathmandu is to take the flight to Lhasa and get an overland trip from there. The overland journey from Lhasa to EBC and back normally takes 8-9 days and covers many other sights along the way.

The first few days in Lhasa are spent acclimatizing to the higher altitude, and you get to visit some of Lhasa’s incredible attractions such as the Potala Palace, Jokhang Temple, and the monasteries of Sera and Drepung. After acclimatizing, it is then out on the road to Gyantse and Shigatse for the first night outside Lhasa. The road to Gyantse is relatively short, and passes the stunning Lake Yamdrok, one of the Great Three Holy Lakes of Tibet. You will also pass close by the Karola Glacier and cross over the Simila Pass before arriving in Gyantse to view the spectacular Gyantse Kumbum, the largest stupa of its kind in the world, at 32 meters tall. Then it is on to Shigatse for the night. 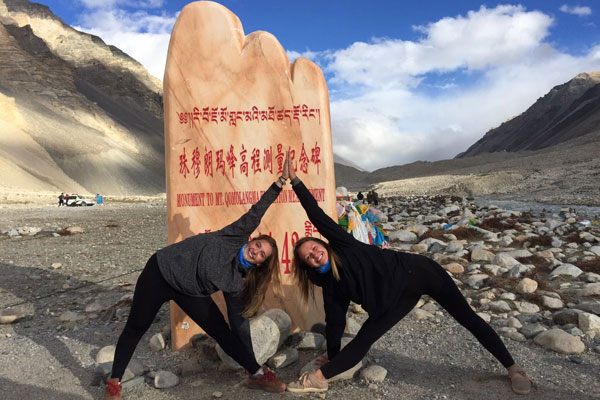 Following the overland trip from Lhasa, we finally made it to Everest Base Camp in Tibet.

Before leaving Shigatse and heading for the base camp, you will get the chance to visit the Tashilhunpo Monastery, the famous seat of the Panchen Lama, Tibet’s second highest incarnation and religious leader. Then it is on towards the world’s highest mountain, passing over three high passes on the route. Tsola Pass is the first at 4,600 meters, and then Gyatso La Pass at 5,248 meters, the highest pass on the route to EBC from Lhasa. The day ends with your arrival at the base camp, at 5,200 meters, where you can take photos and relax in the shadow of this massive peak.

Travel Permits for Kathmandu to Everest Base Camp in Tibet

To get to the Everest Base Camp in Tibet from Kathmandu, you need to prepare several important travel documents before you go, including Chinese Group Visa, Tibet Travel Permit, Alien’s Travel Permit and so on.

Instead of getting a Chinese Entry Visa from the Embassy of the People’s Republic of China, when traveling from Nepal, you need to get a Group Tourist Visa that issued by Chinese embassy in Kathmandu.

The main permit for entering and traveling in Tibet, the Tibet Travel Permit is obtained by us on your behalf from the Tibet Tourism Bureau in Lhasa. Processing takes around 15-20 days, and you need to book your tour well in advance in order to ensure the permit is processed in time. The application requires a scanned copy of your passport and will be delivered to you by our agent in Kathmandu along with your visa.

Beside, you also need to apply for the Alien’s Travel Permit to travel to Mount Everest area outside Lhasa, and it is normally obtained in Lhasa, using your scanned passport copy and the Tibet Travel Permit. This takes just a few hours and will be sent to Nepal to our agent there to be handed to you with your other documents.

As the most popular attractions in both Tibet and Nepal, the base camp of Mount Everest allure hundreds of thousands of visitors every year. From Kathmandu to the Everest Base Camp in Nepal, one can first take a flight to Lukla, and then enjoy the trek to the destination. From Kathmandu to Everest Base Camp in Tibet, one can drive overland across the Gyirong Port, or fly directly to Lhasa and then travel the way to EBC. If you still have any other questions, please feel free to contact us for further information.

0 Comment ON "Kathmandu to Everest Base Camp: How Far and How to Get There"