How to Get to Everest Base Camp

The Everest Base Camp is one of the most popular destinations for trips to the Himalaya regions. How to get to the base camp to witness the top of the world is often asked by tourists who are planning their first trip to the Everest.

Recently, tourists can depart from either Tibet or Nepal to Mount Everest. Here is the detailed transfer guide to Everest Base Camp.

Where is Everest Base Camp

Location of Everest Base Camp in Tibet

Lying in the Shigatse Prefecture of the Tibet Autonomous Region, the Northern Base Camp in Tibet is located around six kilometers from Rongbuk Monastery in Tingri County.

There is no airport or railway station near Mount Everest, which means a long drive along the highway to get there. However, with the Friendship highway being mostly asphalt road, it is convenient to drive all the way there. And it gives you a chance to visit some of the amazing places and sights along the way.

Location of Everest Base Camp in Nepal

Everest Base Camp in Nepal lies around 15 kilometers from the summit of the mountain and the border with China which crosses the peak. Located in Khumjung in the Khumbu Region of Nepal, at the tongue of the Khumbu Glacier icefall, the base camp is hard to get to and has no road access at all.

Get to Everest Base Camp from Tibet

Overland to Everest Base Camp in Tibet

There is more than one way to get to Shigatse from Lhasa, but the Friendship highway is the fastest by far. The road follows the lowlands and river valleys, avoiding the mountains and their hard climbs. An Everest Base Camp Tour tends to take the longer route following the S307 highway as it takes them past Lake Yamdrok, the Karola Glacier, and the Kampala Pass, as well as going through Gyantse to visit the famous Kumbum before rejoining the G318 in Shigatse. 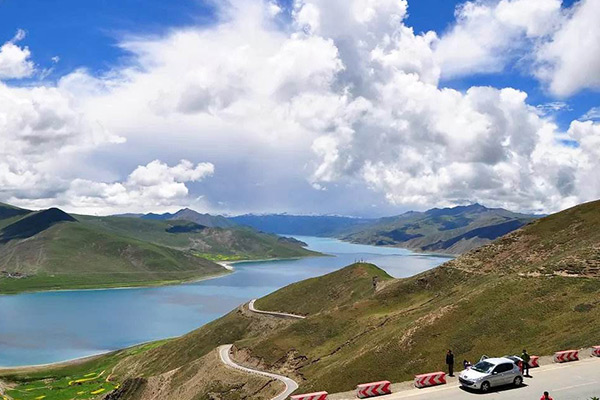 Drive to Everest Base Camp from Lhasa via Lake Yamdrok

The more direct route cuts around two hours off the travel time to Shigatse, only taking around six hours, and the road condition is better, as it is almost all good asphalt surfaces. This stretch of the Friendship Highway is rated as one of the best roads in Tibet thanks to modern resurfacing that has happened over recent years.

From Shigatse to Tingri the road condition gets a little worse, as the resurfacing has yet to reach the latter part of this section of the highway. It takes around 4- 4.5 hours to cover the 240km distance, and parts of the road are gravel or dirt roads, which slow the traveling down a little, as does the winding of the road as it goes up and down the mountains. The change in altitude from Shigatse to Tingri is around 1,000 meters, so care should be taken against altitude sickness.

From Tingri the road changes condition even more, as you leave the G318 and take the local roads to get to Rongbuk, and then on to EBC. While the distance to EBC from Tingri is only 120 kilometers, the road condition is good but the winding road makes travel slower, taking around four hours to make the trip.

Cycling to Everest Base Camp in Tibet

Following the same route as the overland journey to the base camp, visitors to the Everest Base Camp in Tibet can cycle from Lhasa to Everest Base Camp along the Friendship highway, and many tourists do this in groups as a great way to see the countryside as they traverse the Tibetan Plateau. The route follows the G318, turning off to take in Lake Yamdrok, Karola Glacier, and Gyantse on the way to Shigatse, and then through Tingri and past Rongbuk to Everest Base Camp. 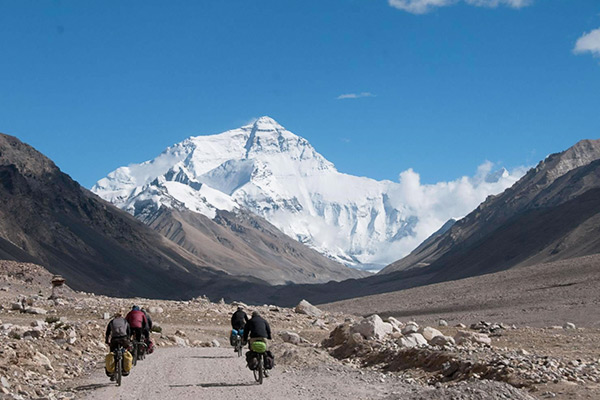 Cycle from Lhasa to Everest Base Camp

The most famous cycling route in Tibet, the Lhasa to Everest Base Camp cycling tour is a favorite of cycling enthusiasts who want to experience the great Tibetan Plateau in all its glory, facing the elements and mountain pass climbs with relish. The trip is a real adventure, and not for the faint-hearted since it is a hard and arduous route that takes around 17 days.

The cost of the EBC cycling tour is a lot higher than normal vehicle tours, due to the time it takes to travel the distance to EBC, as well as the cost of the guide, maintenance, tools, bike transportation or hire, and the support vehicle which is a requirement when cycling in Tibet.

Trekking to Everest Base Camp in Tibet

For those who want a little adventure along their trip to the Everest Base Camp, there is a nice trek from Old Tingri to Everest Base Camp that you can partake of. While the road distance from Tingri to EBC is 120km, the overland direct route of the trek is just 70km, and follows a beautiful trekking trail to get to the base camp. 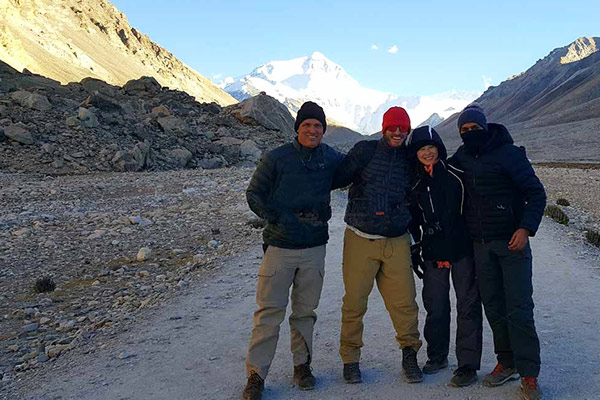 Trek to Everest Base Camp in Tibet

This classic trek from Tingri to EBC is physically challenging, and follows a route from Tingri, over a high pass at 5,170 meters, then through the Rachu Valley and Lungthang to Danak, which is where you stop for the first night of camping. Then it is on to the Lamna La Pass, which is at 5,150 meters, before dropping down to the second camping site at Zommug. The third day is spent trekking along the trail to Rongbuk Monastery, where you will get to stay in a bed for the last night, before trekking the last eight kilometers to EBC in the morning.

Get to Everest Base Camp from Nepal

Kathmandu to Everest Base Camp in Tibet

From Kathmandu, you can get to EBC in Tibet by taking a road trip over the Sino-Nepal border at Gyirong Port. The border, which has only been open for tourists again since August 2017, is accessible by bus or car so that you can take an overland trip from Kathmandu to Lhasa, taking in EBC along the way. From the border it is a short trip to the Everest Base Camp at the northern side of Mount Everest in Tibet, where you can view the amazing sight of the world’s highest mountain, before doing the tour to Lhasa, in the reverse order of those traveling from Lhasa to EBC.

Trekking to Everest Base Camp in Nepal

The route from Kathmandu to EBC in Nepal is a long and arduous one that requires plenty of walking, and increases in altitude dramatically along the way.

The classic Nepal Everest Base Camp trekking tour starts with a flight from Kathmandu to Lukla, the famous airport on the side of the mountain that is the scariest landing in the world. The flight takes less than an hour, and you can soon begin your trip to EBC. 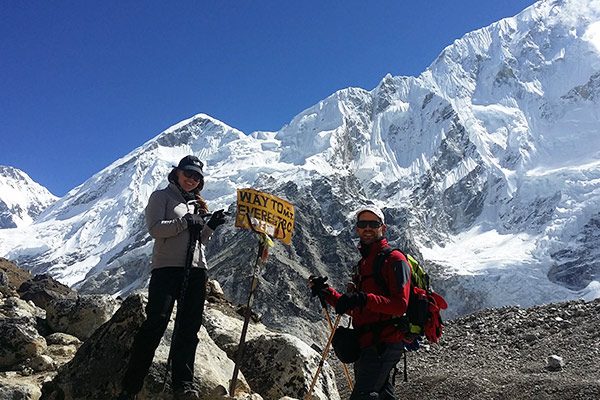 Trek to EBC in Nepal

One of the most popular treks in the world, the Lukla to Everest Base Camp trekking route takes you through villages such as Namche Bazaar, the Sherpa capital, at 3,440 meters, and follows the Dudh Kosi River. Days are set aside for rest and acclimatization, as the increase in elevation from Lukla to EBC in Nepal is much greater than from Lhasa to EBC in Tibet.

The trek then continues up to the village of Dingboche, at 4,260 meters, where you can rest again and acclimatize to the increase in altitude you have just trekked. From there it is then on to Gorak Shep, a flat field below Mount Pumori, where you can climb up to Kala Patthar (5,545m) to get the best view of the world’s highest mountain on the south side of the border. After that, you drop back down to Gorak Shep and continue on to the south base camp, at 5,364 meters above sea level.

Kathmandu to EBC in Nepal by Helicopter

If you don’t have enough time to take a trekking tour to the base camp of Mount Everest from Kathmandu, you can take a helicopter tour from Kathmandu to EBC in Nepal.

The Everest Helicopter tours are a growing industry in Nepal, and the trips to the Southern Base Camp are a great way to see the summit without doing any hiking in Nepal. 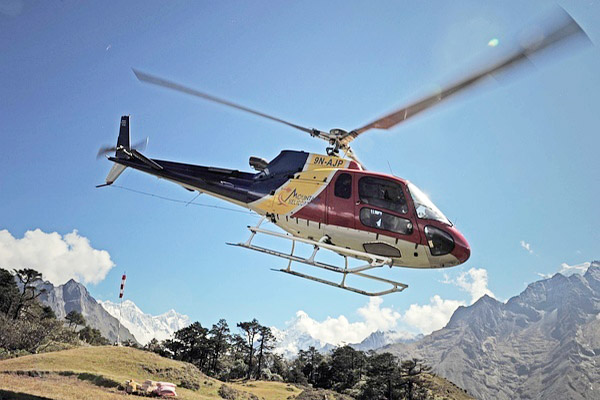 Most of the tours by helicopter leave from Kathmandu’s Tribhuvan International Airport, and fly first to Lukla to refuel, before taking off again to take you to the base camp. While you will only have around 15 minutes at the base camp, or at Kala Patthar if you prefer, due to the extreme altitude change, you will then fly to the Everest View Hotel, where you can get some lunch and take in the great view of the summit of the world’s highest mountain in luxury.

More Things to Know before Getting to Everest Base Camp

Physical Demands for Getting to Everest Base Camp

Most ordinary tourists can take the overland trip to the Everest Base Camp in Tibet. But you need to pay attention to the high altitude sickness in Tibet plateau, since the northern base camp of Mount Everest is as 5200 meters above the sea level.

For trekking and cycling trips to Everest Base Camp, you need to be a good standard of physical fitness, no matter you get to the EBC in Tibet or in Nepal.

Best Time to Get to Everest Base Camp

April to May and late September to November are the best times to go to the base camps on both sides of the mountain. Spring and autumn have similar climates and weather conditions, which make it better for both trekking the trails to the Southern Base Camp and clearer skies for viewing the summit of the mountain from the Northern Base Camp.

It is convenient to get to the Everest Base Camp in Tibet by overland, trekking and cycling from Lhasa. The classic overland from Kathmandu to Lhasa also covers one-night stay at the base camp in Tibet.

0 Comment ON "How to Get to Everest Base Camp"