Can I Fly to Everest Base Camp? Yes, You Can and Here's How

Traveling to Mount Everest Base Camp (EBC) is one of the best trips you can take while in the Himalayas, and there is no better sight than that if the world’s highest mountain towering above you. Everest has two base camps, since it lies right on the border between Nepal and China. The south base camp lies in Nepal and is normally a 12-day trek to get to it, while the north base camp, in Tibet, can be easily reached by road using one of our Mount Everest Base Camp tours.

But trekking and driving is not the only way to reach the base camp. There is also the option of flying. Yes, you can actually fly to the Everest Base Camp in Nepal, using one of the many helicopter tours that run daily throughout most of the year.

How to Take a Helicopter Ride to Mount Everest in Nepal

Taking the helicopter ride to EBC in Nepal is an amazing adventure, and a must-do for those that are able to manage it and love to fly. Traveling by helicopter, you will get to see the stunning aerial view of Mount Everest, and land to take some photos of the massive mountain, before heading back down again.

Most Everest Base Camp tours by helicopter start in Kathmandu, and fly direct to Lukla, the airport that marks the start of the EBC trek. Starting early in the morning, you will transfer to Tribhuvan International Airport and board the helicopter for the flight to Lukla. From there, it is around a 45-minute flight over rice fields, jungles, and the lower foothills of the Himalayas to Lukla. Along the way, you will get to see some of the landscape of Nepal from an aerial viewpoint, including Ganesh, Manaslu, the Langtang National Park, and the peaks of Gaurishanker and Melung Tse in the Jugal Himal range.

Traveling by helicopter, you will get to see the stunning aerial view of Mount Everest in Nepal.

At Lukla, you will not get out while the crew make their fueling stop, and after around ten minutes you will be on your way again, heading upwards towards EBC. The landing strip at Lukla is known to be one of the scariest in the world, with a short runway that has a sheer cliff at one end and a massive drop at the other. After lifting off at Lukla, the flight takes you over some of the highlights of the trekking route to EBC, including Namche Bazaar, Tengboche, and the Everest View Hotel. After flying over the base camp, the helicopter will make a landing for you to get out and take photos at Kala Patthar, the best place to get a good view of the mountain. Everest itself cannot be viewed from EBC in Nepal, as the ridge of the mountain is in the way.

After around 15 minutes of taking photos, the flight lifts off again, and heads back towards Lukla for refueling and then back to Kathmandu. Some flights do offer a breakfast at the Everest View hotel, where they will stop for an hour for you to eat and relax.

Travel Tips for Flying to Everest Base Camp in Nepal

The ride to Lukla from Kathmandu is an amazing flight, taking you over some of Nepal’s delightful landscapes and the views are stunning. As this is only a short flight, you do not really get the chance to see as much as you would if you were traveling overland.

The stop at Kala Patthar is very short, especially for the cost of the trip. Flights only allow you a maximum of 15 minutes at Kala Patthar, which lies at 5,644 meters above sea level, as the effects of altitude sickness at this elevation without acclimatizing first are often felt very quickly. A short stop is all that is possible.

If you are thinking of taking the flight, it is best to get a group together to share the cost, as this is the most expensive way to get that close-up view of Mount Everest from Kala Patthar.

Can the helicopter fly to the top of Mount Everest?

No, the helicopter cannot land at the summit of Mount Everest, although it can fly over the summit so that you can have a look at this famous peak. Helicopter landings at the summit are not permitted as the altitude is too high for people to reach without proper acclimatization on the way.

How to Fly to Everest Base Camp in Tibet

No Direct Flight to the Base Camp, But Only to the Nearest Airport in Shigatse

Traveling to Everest Base Camp in Tibet, however, cannot be done by flight at all. There is no direct flight to the base camp, though you can get a flight to Shigatse, the second city of Tibet and the closest major city to EBC. A prefecture-level city, Shigatse city itself is located within the ancient Tsang province of Tibet. The home to the Tashilhunpo Monastery, the ancient seat of the Panchen Lama, the second highest reincarnation in Tibet, Shigatse is only one of five cities that have a domestic airport in Tibet. 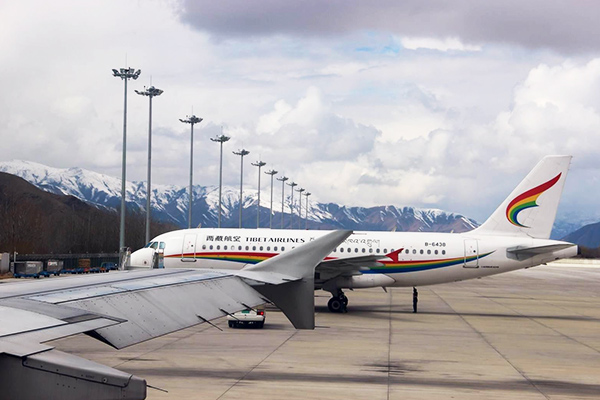 Shigatse is the nearest airport to Everest Base Camp in Tibet.

The last of the five airports in Tibet to be constructed, Shigatse Peace Airport is located in the Jangdam Township in Shigatse’s Samzhubze District. The airport lies around 43 kilometers from the center of Shigatse City, at an elevation of 3,782 meters. The eleventh highest airport in the world, Shigatse Peace Airport is a dual use terminal, with both domestic and military flights using the airport.

How to Get to the Everest Base Camp from the Airport

From Shigatse Peace Airport, getting to Mount Everest Base Camp is a relatively easy route, that takes around 7-8 hours to get you to the base camp itself. When arriving at the airport, you will be met by your tour guide and driver, who will transport you to the base camp.

The route takes you through Shigatse City, as the airport lies to the east of the city. The route follows the G318 National Road, also known as the Sino-Tibet Friendship Highway, until you turn off to head for the mountain at the town of Old Tingri. From there the road heads south, winding through the mountainous region of Shigatse Prefecture to the world’s highest monastery at Rongbuk.

The last stop before EBC, Rongbuk Monastery is a great place to view the sunset and sunrise on the mountainside, and is where most people stay when visiting Everest, as the monastery has a small guesthouse for travelers and pilgrims.

Shigatse City lies at an elevation of around 3,800 meters, a little higher that Lhasa, the Tibetan capital. If you are flying into Shigatse from mainland China to take your tour to Mount Everest, then you should be aware of the risks of altitude sickness. Normally, when one flies into Lhasa for a Tibet tour, the first few days are spent acclimatizing to the very high altitude of the city. Altitude sickness when arriving in Lhasa hits more than half of the people that travel there, even when allowing for acclimatization. 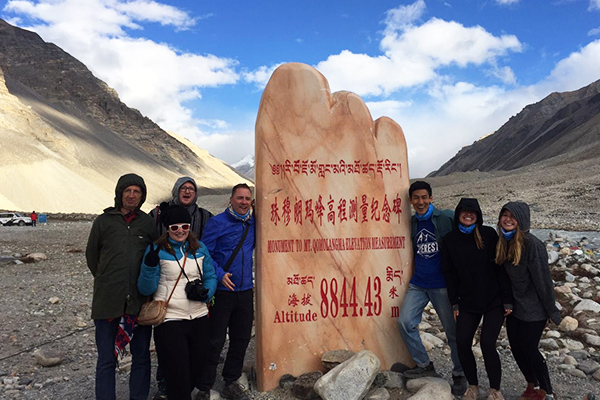 When traveling direct to Shigatse for Everest tour, one should be aware of the altitude sickness.

When traveling direct to Shigatse for a trip to Everest, you should really give yourself at least a day or two to acclimatize to the altitude the same way as you would in Lhasa. One of the main concerns of altitude sickness is the way it can affect you, making you feel sick and nauseous, with headaches, aching limbs, swelling of the extremities and face, and other uncomfortable symptoms.

Traveling straight to EBC, which lies at an elevation of 5,200 meters, is not recommended, as you greatly increase the risk of altitude sickness due to ascending too high too fast. This can cause more severe symptoms of altitude sickness to occur, and in some cases, cause you to be severely ill. These more severe effect will require an immediate descent to a lower altitude and possibly hospital treatment for the heightened symptoms. At 5,200 meters, without acclimatization, you also run the risk of a High Altitude Pulmonary Edema (HAPE) or High Altitude Cerebral Edema (HACE), which can be potentially fatal.

More Ways to Get to Everest Base Camp

Flying to Shigatse and driving the shorter distance from there is not the only way to get to EBC in Tibet. While it may save time by getting to Shigatse much faster than on a normal tour of Tibet, it also carries with it more risk, and for those that do not want to risk severe altitude sickness, there is another way.

Lhasa to Everest Base Camp by Overland

Most tours to Everest Base Camp start in Lhasa, the Tibetan regional capital. After either flying or taking the Tibet train to the capital city, travelers get a few days to rest and acclimatize, while looking around the amazing sight of this wonderful City of Sunlight. Sights include the awesome Potala Palace, as well as the sacred Jokhang Temple and the famous Barkhor Street.

Once you are acclimatized, the tour route will take you out of the Tibetan capital and along the Friendship Highway to Gyantse, the home of the famous 32-meter-high Kumbum, and Shigatse, where you can visit the Tashilhunpo Monastery. Then it is on to EBC and Rongbuk Monastery, where you can get your amazing photos of the world’s highest mountain.

This amazing Lhasa EBC overland trip takes around 8 days for a normal tour and takes you to some of the most spectacular landscapes and sights in the region. From the stunning Lake Yamdrok to the southwest of the Tibetan capital to the wonders of the high-altitude mountain passes that the route travels through, giving you wonderful views of many of the world’s highest mountains, this tour across the vast expanse of the Tibetan plateau is one of the most wondrous adventures you can imagine.

0 Comment ON "Can I Fly to Everest Base Camp? Yes, You Can and Here's How"