How to Plan China Tibet Tour with Yangtze River Cruise

The cruise along the Yangtze adds to the intense experience of China and Tibet, by giving you a unique view of the massive importance this vast river has had on China over the last 3,000 years.

From the river origin in Tibet plateau to the East China Sea, a China Tibet Yangtze tour will take you to travel through some of China’s most stunning destinations.

However, it seems quite complicated to arrange a long voyage to explore the vast land. To help you arrange a lifetime journey there, we are going to show you the most important steps to make your China Tibet tour with Yangtze River Cruise come true.

Decided to Go Upstream or Downstream?

Origins from Tibet Plateau, the Yangtze River actually rises from the Tanggula Mountains. The headwaters of the river come from the melting glaciers of the Geladiaindong Peak at 6621 meters above the sea level. From the boundary between Qinghai Province and Tibet Autonomous Region, the Yangtze River stretching from the northwestern province of Qinghai to the easternmost shores of China, at Shanghai on the East China Sea. 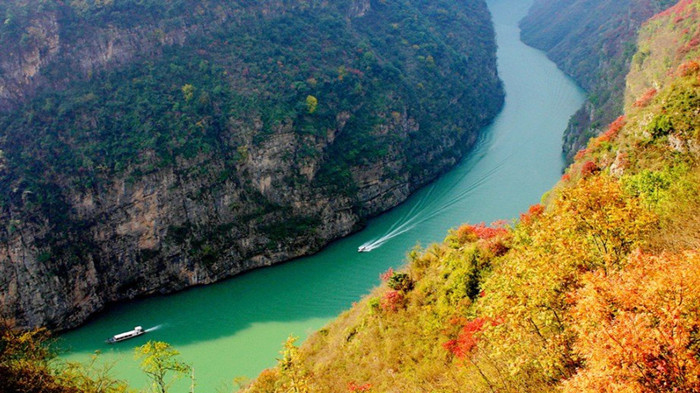 The most essential part of Yangtze River Cruise is the cruise through the popular three gorges.

The downstream route of the Yangtze River cruise is the most popular, and takes you from the stunning city municipality of Chongqing to the smaller town of Yichang, and is considered the best route to take for those that are interested in the unique landscapes of the Three Gorges. Chongqing, with its wealth of attractions, is a great place to start the cruise, and at just four days, it is a perfect way to get the best of the Yangtze River.

As opposite, the upstream Yangtze cruise is from Shanghai on the eastern coast, and takes you along the river through Nanjing and Wuhan to the base of the Three Gorges Dam.

The route is less popular with tourists, as the cruises only run at certain times of the year and takes more time than a downstream cruise.

Generally, for those who want an upstream Yangtze River cruise to Chongqing, the best choice is a 5-day cruise from Yichang to Chongqing.

For those that are taking a tour to Tibet first, it is recommended that you take the cruise heading downstream, as it is easier to get from Lhasa to Chongqing, to start the cruise.

It also means that you do not need to go back on yourself in a loop. Your China Tibet tour is laterally across the country from west to east.

On average, a 14-day trip, depending on how long you are planning on staying in Tibet, this kind of tour allows you to take in the stunning sights of Lhasa, Shigatse, and possibly Mount Everest, before heading back to Lhasa to take a direct flight to Chongqing for the cruise. 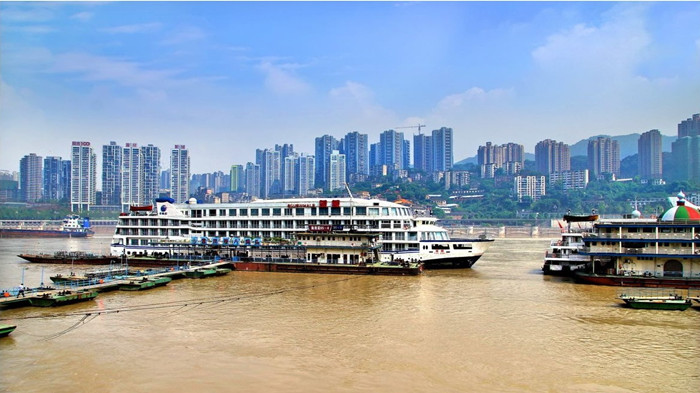 Get on-board the Yangtze Cruise Ship at Chaotianmen Dock.

Getting to the port from the airport is relatively easy, as there is a good metro network in Chongqing. From the airport, you can take Metro Line 3 (blue line) as far as Hongqihegou Station, and then take Line 6 (pink line) west then south to the Chongqing Chaotianmen Square, where the docks are for the cruises. Alternatively, you can take Line 3 to Niujiaotuo Station, and change to Line 2 (green line) to get to the docks.

If you plan to start your China Tibet Yangtze tour from southern China, such as Guangzhou, Guilin and Shanghai, it is suggested to take an upstream Yangtze River cruise from Yichang to Chongqing and then get to Tibet.

How to Get to Yichang to take the Yangtze Cruise Ship

It is very convenient to get to Yichang from southern part of mainland China either by air or by high speed train.

To Taohuacun Port, there is no arranged bus for passengers. It takes about 1.5 hours from Yichang Airport to Taohuacun Port and 35 minutes from the city downtown to the port.

How to Get to Lhasa from Chongqing after Yangtze Cruise

Flights to Lhasa run daily from Chongqing Jiangbei International Airport, and take around 2 hours 45 minutes for this non-stop flight. The Chongqing to Lhasa flight cost around 336 US dollars per person for an economy flight to the Tibetan capital.

Alternatively, you have the option of taking the train to Tibet, as Chongqing is one of the seven gateway cities to Lhasa. The Chongqing to Lhasa Train takes around 35 hours to make the 3,050 kilometer trip to the plateau, and costs from around 95 US dollars per person.

How to Choose a Yangtze River Cruise Ship

Choosing which cruise ship to take from over 30 ships can be hard, and while there is very little difference in which ship you do take, there are factors that may help you decide.

The most popular cruise companies, with long history, among foreign tourists are Victoria Cruises, New Century Cruises and President Cruises. All of them offer outstanding high quality service onboard. 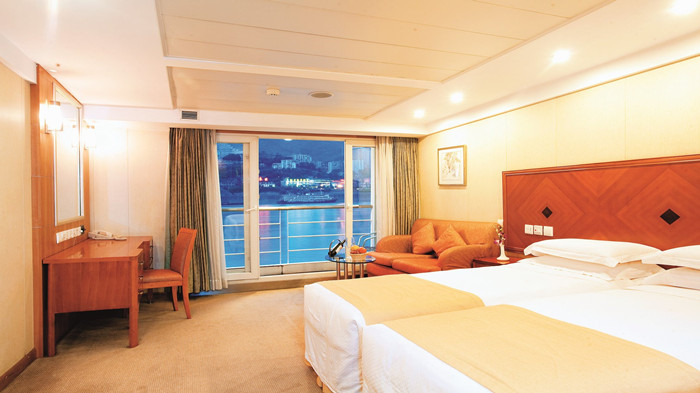 You can contact our travel expert to tell us your preferred cruising date or your favorite ship. We will narrow down the choices according to your requirements and help you book your idea ship for your China Yangtze cruise.

Travel Documents for China Tibet Tour with a Yangtze Cruise

All international tourists to China are required to have a valid tourist visa for entry into the country. China does not have a Visa on Arrival system, so your Chinese visa must be applied for and processed prior to the trip.

The Chinese Visa can be applied for at the nearest Embassy of the People’s Republic of China, and require your valid passport, two passport-sized photos, and proof of hotel and return/onward flight booking. Processing takes around three working days.

The Tibet Travel Permit (TTP) is required for all tourists traveling to Tibet, and is not available for personal application. Permits can only be applied fro through a registered Tibet tour operator, once you have booked a pre-arranged tour to the region.

Once you have booked your Tibet tour, we will make the application on your behalf, using a scanned copy of your visa and passport. Processing takes up to 20 days at present, though this is set to drop in the near future. Once processed, we will forward the permit to your hotel in China for your travel to Lhasa.

You will need to have a valid passport for all China Tibet tours and it is required for getting onboard the Yangtze cruise ship and taking the train and the flight in China, especially the flights and trains to Tibet.

The passport needs to have at least six months validity remaining at the time of travel. If you do not have the required six months validity left on your current passport, it is recommended that you apply for a new passport with your country’s passport department, or you may find that your visa will not be approved.

It is suggested to take your China Tibet Yangtze tour in spring (April to May) or autumn (October to November), as these times of year are comfortable for both China and Tibet, with dry weather and warm to mild temperatures.

If you are not bothered by crowds of tourists and a little rain, then summer is ideal, as it is the peak season for tourism in both Tibet and the Yangtze River Cruise areas.

Winter is also good for both, as there are cruises on the downstream section throughout the year, and winter in Tibet is not as cold as people think. It is also the low season, and tours are cheaper with few tourists.

To travel China and Tibet together with a relaxing Yangtze River cruise could be a lifetime experience for you to explore the most charming parts of China from the west highland to the east sea.

To add a Yangtze River cruise to an ordinary China Tibet tour, you need to decide to which cruise route to take - a downstream cruise from Chongqing to Yichang or an upstream cruise from Yichang to Chongqing. And if you need help to choose a proper cruise ship, please feel free to contact us.

No matter which cruise route and cruise ship you choose, you need to prepare all the required travel documents for your long vacation in China Tibet, including the Chinese Visa, Tibet Travel Permit and so on.

The best time to travel China and Tibet with a Yangtze cruise is spring and winter, while summer holiday is also a good time to take the cruise but too crowded in Tibet and other popular destinations in mainland China.