Chengdu to Lhasa Overland: the Most Beautiful Way to Tibet

Getting to Tibet from Chengdu is usually done by flight or train journey. However, for those that want a little more adventure in their lives, taking a Chengdu to Lhasa overland trip along the Sichuan Tibet Highway is the most epic journey in Tibet.

How to plan an overland journey from Chengdu to Lhasa? How to choose the proper route for your lifetime Tibet tour from Chengdu? How to experience the best parts in the best time? Here we are going to introduce you the most essential travel information about the Chengdu to Lhasa overland tour.

Reopened to foreign tourists in 2019, the Sichuan Tibet highway tour offers two spectacular routes leading to Tibet, the northern and the southern, both of which are utterly outstanding. There is little difference in the distances, but they are very different experiences, and you really need to travel both to fully understand what they are.

About the Southern Route from Chengdu to Lhasa (Highway G318 )

The southern route of the Sichuan Tibet Highway is often praised as being the most beautiful route to the Tibetan plateau, despite previously being listed as one of the world’s most dangerous roads. This stunning route across Sichuan Province to Lhasa is now a well-paved road, which has made the journey a little safer for most drivers.

Crossing through an ever-changing landscape of high snow-capped mountains, lush river valleys, deep canyons and gorges, and vast expanses of endless grasslands, the drive along this amazing road is awe-inspiring, and one of the most exciting adventures of your life. 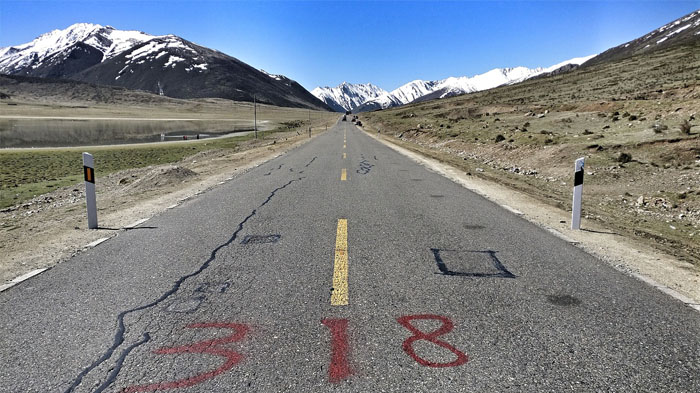 G318 is one of the most popular highway routes to Tibet.

An epic Chengdu to Lhasa overland tour of more than 2,100 kilometers, you will pass over high alpine passes that exceed 4,000 meters, and take you to amazing sites such as Zheduo Mountain Pass (4,298m), Haizi Mountain (4,700m), the Bangda Grassland, and the famous Seventy-two Bends section of the road that takes you down to the Nu River.

About the Northern Route from Chengdu to Lhasa (Highway G317)

The northern route of the Sichuan Tibet Highway is the longer of the two roads, and is the less well paved, making it a drive that should only be driven by experienced drivers in China. Several sections of this route are just dirt roads, though the majority of the route is now paved with asphalt.

Covering a distance of more than 2,200 kilometers, the route actually follows the G317 National Highway, which heads up through Chamdo and Nagqu to later drop down to Lhasa, the Tibetan capital.

While the scenery is not as outstanding as that of the southern route, it is still amazing, and you will get to visit some of the outlying places that few foreigners ever get to see, such as the 540 year-old Garzê Gompa; the beautiful and holy lake of Yihun Lhatso; and the largest Bon Monastery in Kham, the Yixi Monastery.

The southern route of the Sichuan Tibet Highway is noted for being the most beautiful route to Tibet, and it is undoubtedly true. As the road heads west, you will travel through a landscape that is reminiscent of the awesome Swiss Alps, changing mile after mile between snowy mountains, lush river valleys, and awesome grand canyons. Prayer flags and mani stones litter the route, showing how dedicated the Tibetan people are to their beliefs, and the temples and monasteries of the villages along the route make this a golden road for photography fans. 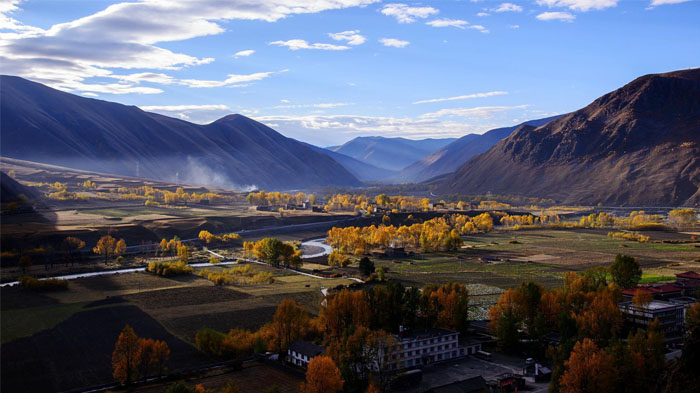 However, if the southern route is the more beautiful, the northern route has the better cultural experiences. Heading northwest from Chengdu, you head through several different Tibetan cultural regions, where you will find the local villages still feel as if they have been lost in time. Each area of the Tibetan ethnic minorities has a slightly different outlook and culture, although always with the underlying religious undertones of Tibetan Buddhism. From Danba to Jiaju, Garzê to Dege, and Chamdo to Nagqu, the variety of cultures that you will be able to experience is mind-blowing. 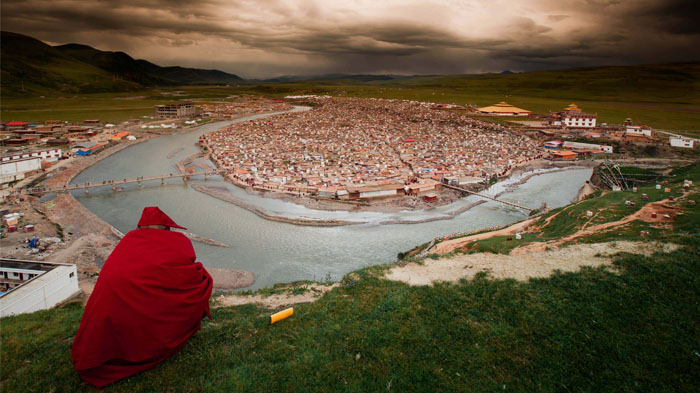 Yarchen Gar, the biggest Tibetan Non Shrine in China on the northern route from Chengdu to Lhasa

So how to make the best choice is depend on your own interests. If you want to experience the unique culture and landscapes together, you can first take the northern route from Chengdu to Chamdo, and then go south to join in the southern route in Bangda. Just contact us to tell us what you really interested in, and we will help you arrange the best Tibet overland tour according to your needs.

When is the best time to take a Chengdu to Lhasa overland tour?

While there may be different routes heading through different areas of Sichuan and Tibet, the time of year for both routes to be driven is actually roughly the same, from Late April to May, and from September to late October. While they do head through completely different areas of the Tibet Autonomous Region, with the southern route heading through Nyingchi and the northern through Chamdo and Nagqu, most of the time both can be done. 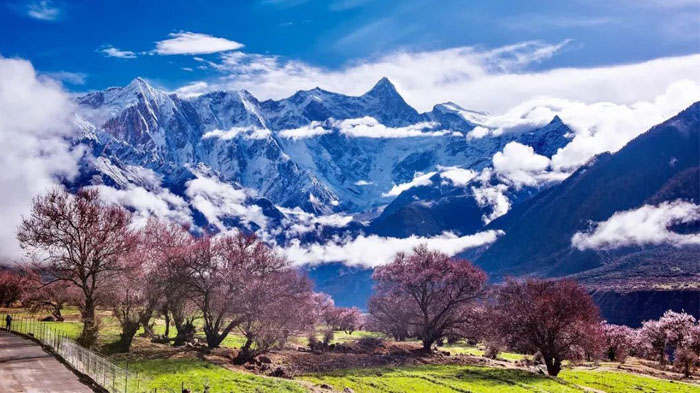 Driving from Chengdu to Lhasa in early Spring, you may have the chance to witness the sea of pink peach blossoms in Nyingchi.

The northern route is not best done until around May, when the ice and snow of Nagqu has properly cleared, and from September on until the end of October but should not really be done through the summer months of July and August due to the monsoon rains being heavier and causing problems of the dirt-road sections.

However, the southern route is ideally suited for travel in the summer monsoon months. Lighter rains in the monsoon season in Sichuan and Nyingchi have less effect on the road conditions, and mostly fall in the late afternoons and evenings. The additional advantage of the southern route is that you can start the route as early as March, and keep driving along it right up to the end of October.

For all travelers, you will need to have your valid passport with current visa stamp for entry into China, as well as the variety of permits that you will need to travel into and around Tibet. You can get the visa from the Embassy of the People’s Republic of China before you depart for your tour, and it is required in order to get the permits for Tibet through your tour operator.

Traveling along the highways to Lhasa in Tibet means that all international travelers will be traveling into the Tibet Autonomous Region through either Nyingchi or Chamdo and Nagqu. This means that, not only do you need to have the Tibet Travel Permit for travel into and around the Tibet Autonomous Region, you will also need the additional permits to travel in the restricted areas and “unopened” areas of the region.

The Tibet Travel permit is obtained via your tour operator once you have booked your tour to Lhasa, and is applied for by us on your behalf using scanned copies of your passport and Chinese Entry Visa. The processing time can take up to 15-20 days, and the approved permit will be forwarded to your hotel in Chengdu ready for your departure.

Dining and Accommodation for the Chengdu to Lhasa Overland Tour 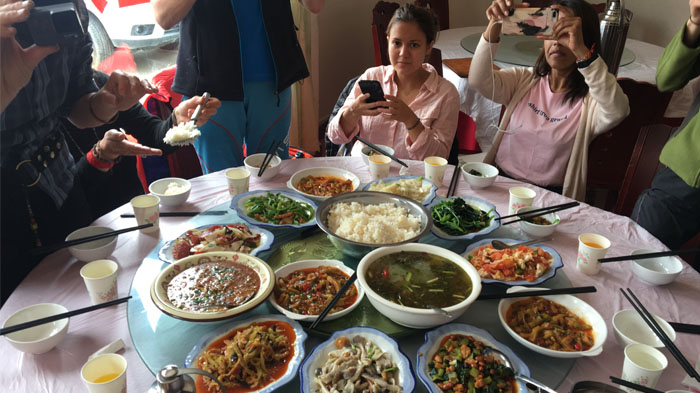 During the Chengdu to Lhasa Overland tour, you will always have the Chinese dishes.

Food in most of the places along the highway is usually a mix of Sichuan cuisine and local Tibetan dishes, although in most of the hostels and hotels that are catering to international tourists, a limited number of western dishes are available. However, if you are not able to eat Sichuan or Tibetan cuisine, it is a good idea to bring your own food along with you.

Taking a Chengdu Tibet tour by land through the Sichuan Tibet Highway is an awesome adventure, whichever route you take. For those that want an idyllic trip from Chengdu up to the Tibetan plateau, the southern route has the best scenic views and is rated as the most beautiful, as well as being safer and well paved. However, if it is outlying adventure you are after, with a little danger thrown in for good measure, and the thrill of traveling into almost uncharted territory, then the northern route is the one for you. Either way, you are guaranteed to have the time of your life on the adventure of a lifetime.

0 Comment ON "Chengdu to Lhasa Overland: the Most Beautiful Way to Tibet"