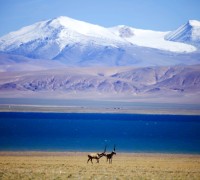 Mao Shiping,the official with the Naque Forestry Bureau said that“the wildlife conservator has discovered that a total of 1,263 Tibetan antelopes were migrating on the way in the protection zone in the Co Nyi Special Administrative County, Nagchu Prefecture on May.4”.

“The Tibetan antelopes have launched their migration at the beginning of May, which has become ten days in advance than usual”,he added.

Mao recommended that the Tibetan antelopes usually begin their migration in the middle of May and will arrive in their destination on around May.20 or at the beginning of June.