Lying on the southern edge of the eastern ridges of the Himalayas, sandwiched between India and the Tibet Autonomous Region of China, Bhutan is the dream destination in Asia, the last true Shangri-La, and a land of dramatic scenery, high mountain passes, and snow-capped peaks, Buddhist prayer flags fluttering in the winds everywhere you travel.

The Land of the Thunder Dragon has been an isolated kingdom for centuries, and it is this isolation from the outside world that has helped to preserve their traditional way of life and their unique Buddhist culture. A country that puts Gross National Happiness above he commercialization of its natural resources, one of the long-term goals of the kingdom’s policy-makers, tourism in Bhutan is strictly controlled, limiting the number of visitors to the kingdom each year to preserve its natural landscapes.

Why Trek in Bhutan

While the country may put its landscape and culture above its desire to earn money, the kingdom has some of the world’s best trekking routes. Whether you are looking for a short few days of trekking through the stunning mountains and vast expanses of forests, or a massive month-long adventure during your Bhutan tour, you can find one, from the high mountain lakes and pristine yet imposing glaciers to the stunning forested hillsides and some of Asia’s most endangered animals that still roam wild in the hills, forests, and plains of this beautiful kingdom.

There are literally dozens of trekking routes across the kingdom, from those that take you through the high mountains of the Himalayas to the lowland treks along lush river valleys and past countless Buddhist monasteries. However, there are a few treks in Bhutan that are must-do trails, and which will give you an immense feeling of accomplishment and pride in completing them.

An eight-day trek that is possibly the most popular in Bhutan, this moderately challenging trek takes you within shouting distance of the famous Mount Jhomolhari, which straddles the border between Tibet and Bhutan. With two high passes over 4,500 meters above sea level, the trek gives you one of the best views of the famous northern face of the mountain, which rises vertically for around 2,700 meters above the highlands through which you are trekking. 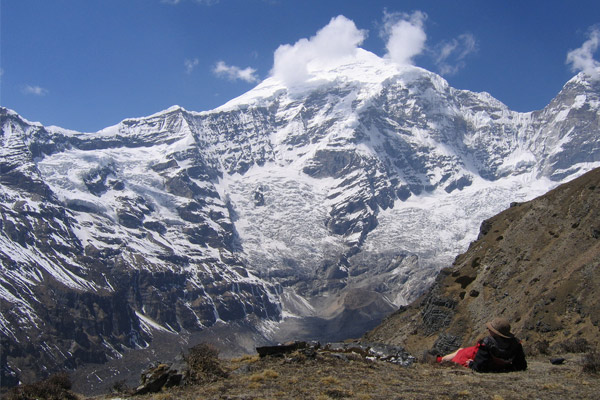 Jhomolhari Trek takes 8 days and straddles the border between Tibet and Bhutan.

Starting at the ruins of the Drugyal Dzong, the most popular route takes you first past the village of Shana and along the Paro River valley to the first campsite at Thangthangkha.Then it is on to the high Jangothang Mountain Base Camp. From there, the route continues along the Paro Chhu Valley and Tshophu Lake to the first pass, Bhonte La, at 4,890 meters, and on down to Lingshi. From Lingshi, the trek climbs to the ridge above the campsite, before dropping down to follow the Mo Chhu Valley and up to Yeli La at 4,820 meters, before dropping down to Shodu Village.From Shodu, the route takes you through Barshong and Dolam Kench, before raching the end at Dodena, where you will be picked up to head back to Thimphu. The total trekking route is around 120 kilometers. 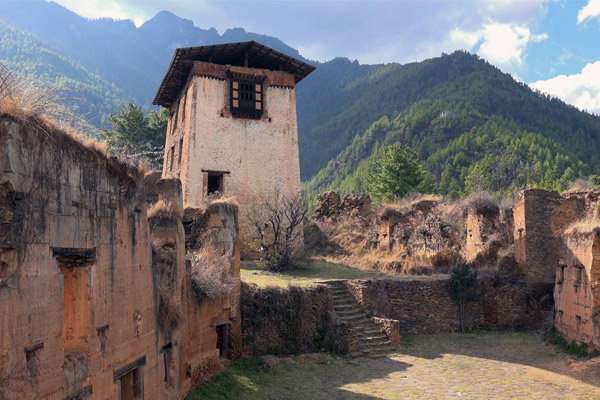 How to Get to Jhomolhari

It is a two-hour drive from Paro to Shana, the start of the trek, which can include a visit to the Taktsang Monastery along the way. From Thimphu, it is best to travel by car to Paro first, and then on from there to Shana, as there is no direct road to the village.

A customizable trek that can be for four or six days, the Druk Path trek runs between the cities of Thimphu and Paro, and while the mountains may be in the distance along the trek, they provide some spectacular backdrops for your photos. A relatively easy trek with plenty of lakes and rivers along the way, the most popular being the Jimiling Lake, with its large trout poking through the surface as they feed. A good trek to take for an introduction to Bhutan trekking, the highest point is a pass at 4,200 meters. 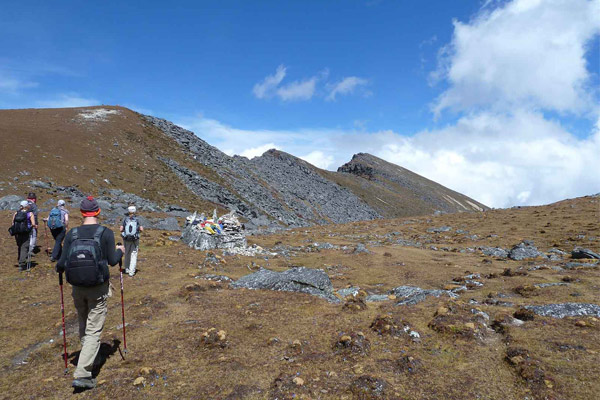 Druk Path trek is a relatively easy trek that runs between Thimphu and Paro.

The main trek, which takes four days, runs from Thimphu to Paro, and runs from the Bhutanese capital to the town of Phajoding through hillside pine forests, then on to Simkota, and the Simkota lake campsite. From there, it is a downhill trek to Jangchulakha and a nice stone bath, before the final stretch on day four to Paro and a nice hotel again. The total trekking distance is around 53 kilometers.

How to Get to Druk Path

This is an easy trek to get to, as it starts on the outskirts of the Bhutanese capital, at Moothang, in the west of the city. Your driver will take you to the start, where your trekking guide will take you along the route to Paro.

One of the most famous treks in Bhutan, as well as possibly the most difficult trekking route in the world, the Snowman trek is a demanding 25-day hike that traverses the mountains that separate Bhutan from Tibet. The trek crosses eleven high-altitude passes, all of which are above 4,500 meters, with the highest being the pass of Rinchenzoe La, at 5,332 meters, and four others above 5,000 meters. The complete isolation of the trail is one of the hardest challenges of the trek, with few villages along the route and most nights spent camping. An adventurous trek for the experienced trekker, this is the ultimate personal challenge in trekking for any enthusiast, but not for a novice to attempt, even with guides. 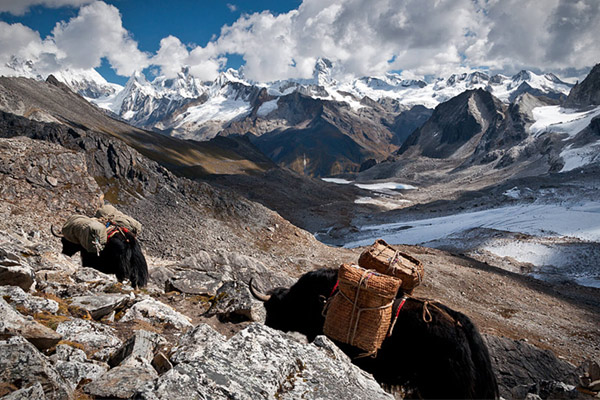 Snowman Trek is possibly the most difficult trekking route in the world that lasts 25 days on hiking.

Starting at Shana, to the north of Paro, the trek follows a path that takes it through Thongo Zampa, Soi Thangthangkha, Jangothang, Lingshi Village, Chebisi Village, Shomuthang camp, Robluthang, Lemithang, Laya Village, Rodophu, Narethang, tarina, Thrika, Chozo, Tsochena, Jichu Dramo, Chukarpo, Tampoe Tsho, and finally to Marothang, the end of the trek. Covering a distance of more than 300 kilometers, this is the most difficult route of the two that can be taken, and is a hard trek, often through snow in the higher areas.

Best reached from Paro, it is a 2-hour drive to Shana Village, to the north of the second city of Bhutan, passing Drukyal Dzong on the way. Preparation for the trip should be done in advance, as the trek normally starts with the first 4-hour leg to Thongo Zampa.

A light three-day trek for those without much time, the Bumthang Owl trek is a great option for scenic mountain views and stunning alpine forests. The forest sections of the trek are mostly bamboo and rhododendron, and contain a huge amount of Bhutan’s forest wildlife. Black bears are common in the region, and it is not unusual to see them as you pass along the trails. The trek also includes several monasteries along the route, including the unique Chuedak Monastery, home to more than one hundred stone carvings of the most honored bodhisattva in Bhutan, Avalokiteśvara. 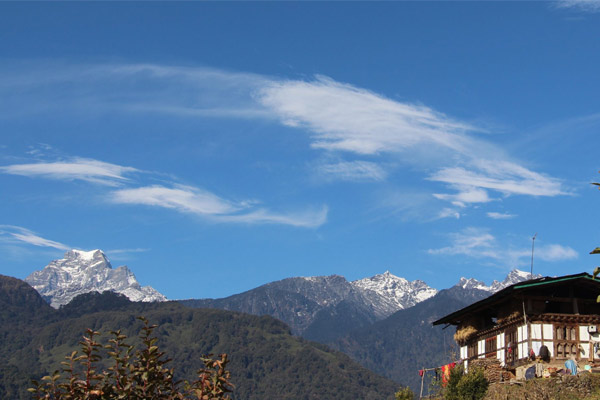 Bumthang Owl Trek with great views of mountains and forests is suitable for those who don't have much time.

The trek starts at Manchugang, and the first part takes you to Dhur Village at 2,900 meters, before continuing on up the hill to the local campsite at Schonaath. From there, the trek continues on the second day to Drangela Pass, through lush hemlock forests as well as firs, spruce, and rhododendron. On day three, the trek continues down as you descend towards Zambhalha and Chuedak Monasteries, finally ending at the Tharpaling Monastery. The trek is just 17 kilometers long.

There are two ways to get to Bumthang for the trek from Manchugang, by flight or driving. Flights take as little as 40 minutes to make the trip to the Bumthang District Airport, and it is a short drive of around 50 kilometers to Manchugang, where the trek starts. For those driving, it is a trip of around 257 kilometers from Thimphu to Bumthang, which takes around eight and a half hours.

A six-day trek that takes you into an area to the south of Thimphu with a multitude of clear shimmering lakes gives you an amazing view of the mountains of the Himalayas in the distance. It is also one of the best places for getting a view of Mount Everest from Bhutan, which can be seen clearly to the west on a clear day. The trek is an off-the-beaten-track route, with few trekkers taking advantage of its lush vegetation and stunning lakes. 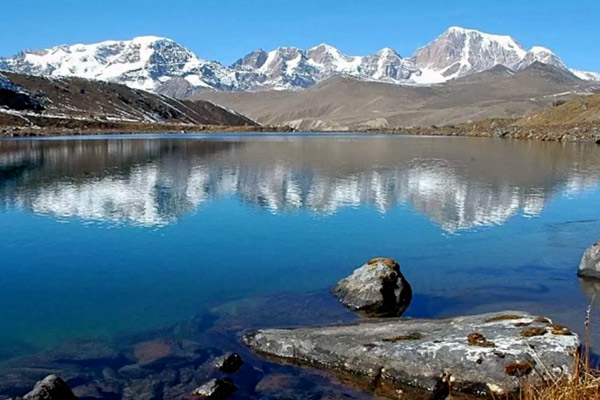 Dagala Thousand Lakes Trek takes you into an area of the south of Thimphu and gives you an amazing view of Himalayas in the distance.

Starting in Genekha, close to the district boundary between Thimphu and Chukha, this trek takes you first to the campsite at Gur, in a meadow filled with wildflowers in the spring and summer months. From Gur, you continue the ascent to Labatama, past some of the best viewpoints for Kanchenjunga, and then on to Panka, along the banks of the Doccha Chhu River. From Panka, the route continues via Talakha and Changang, and finally ends on the outskirts of Thimphu. The total trekking distance is around 41 kilometers.

The village of Genekha is around 45 -minute drive from Thimphu, along some small roads and gravel tracks. The village is almost inaccessible without a four-wheel drive vehicle, lying in the remote hills and forests of southern Thimphu District.

Best Time to Trek in Bhutan

For the best weather, with clearer skies and little rain or snow, spring, from march to the end of April, and autumn, from late September to mid-December, are the best times for trekking in the kingdom. Summer in much of Bhutan can be a wet and dismal time of year, as it is the main monsoon season, which runs from June to around mid-September. The winter months can also be too cold for trekking in many of the best areas of Bhutan, and snow is a common factor in deciding if the treks can be completed.